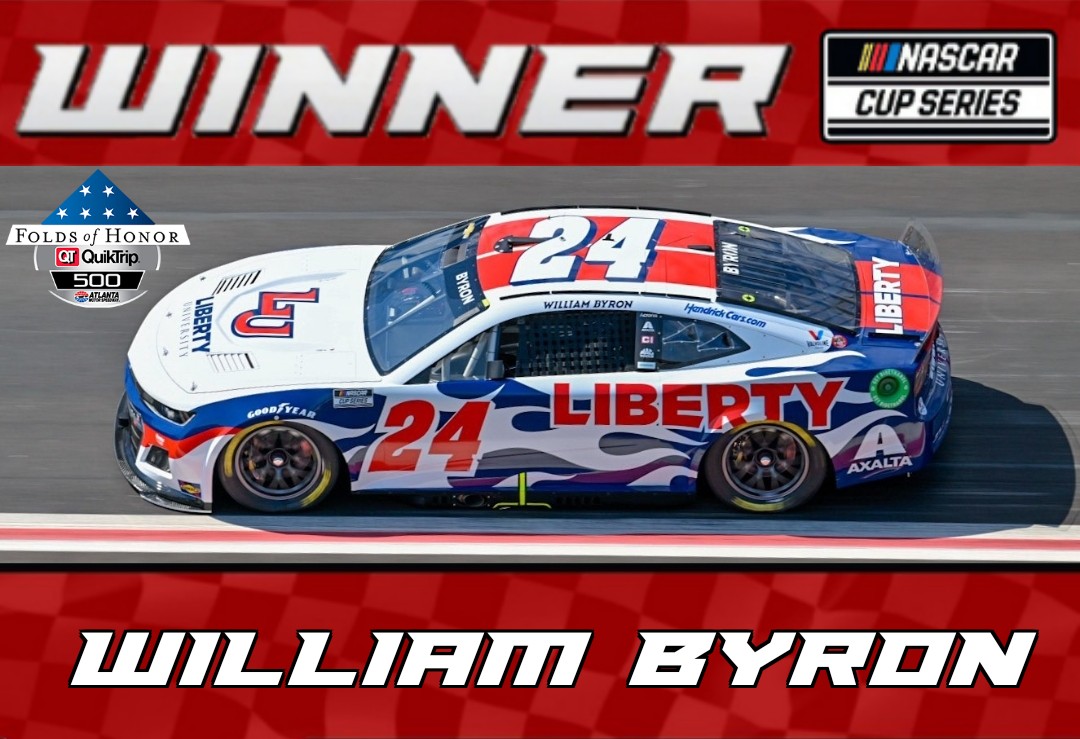 It was superspeedway racing with all the trimmings.

“New” Atlanta Motor Speedway produced a fifth different 2022 winner—William Byron, who managed to keep an angry pack of drafting cars behind him for the final 10 laps of Sunday’s Folds of Honor QuikTrip 500.

Bell, however, was penalized for passing below the boundary line on the backstretch on the final lap and was demoted to 23rd, the last position on the lead lap. That elevated Chastain to his second straight runner-up finish.

Byron took the lead from Bubba Wallace on Lap 316 of 325 and held it the rest of the way.

“It was so different,” said Byron, who collected his third NASCAR Cup Series victory, his first of the season and his first at Atlanta Motor Speedway, which had undergone a major repaving and reconfiguration since the series raced at the 1.54-mile track last July.

“Honestly, the last few laps there and trying to manage the gap to Bubba and trying to not get too far out front. You know, my spotter Brandon (Lines), his first win, so congrats to him. Thanks to this whole team. They’ve done a great job this year.

“Lots of changes with the Next Gen car. The (No. 24 Hendrick Motorsports) Chevrolet was awesome there. Worked hard overnight. Had a pretty rough practice and worked hard on it and got it handling well, like I told you. It was kind of an intermediate style with a little bit of speedway into it, so a lot of fun.”

THE 24 WINS AS CARS CRASH BEHIND HIM. Retweet to congratulate William Byron on his Atlanta victory! pic.twitter.com/MlgxU1hDKJ

In essence, track owner Speedway Motorsports Inc. transformed an intermediate downforce track into a mini-Daytona, and NASCAR responded by mandating a superspeedway competition package for the first race on the new asphalt.

Those who doubted that the dramatic changes would produce nail-biting side-by-side racing were quickly proven wrong, as many of the race teams left the track with destroyed race cars and drivers with payback on their minds.

Byron managed to steer clear of the chaos, but Chastain did not. Leading on Lap 94 near the end of Stage 1, Chastain blew a right rear tire on his No. 1 Trackhouse Racing Chevrolet and slammed in the outside wall in Turn 2.

Chastain lost two laps for improper fueling under NASCAR’s damaged vehicle policy but regained them as the beneficiary under two straight cautions. Deft repair work by his crew kept him competitive.

“That’s the fight in Trackhouse,” Chastain said. “This Gen 7 car, to take a lick like that, blow a tire out of nowhere and leading, just cruising, blow a right rear, slam the wall. Thought our day was over. Our guys went underneath the car, got the toe closer, and we got the balance back where I could drive it.

“And just the Chevy was fast. It was so fast. I mean, we were fighting with Will there at the beginning. It’s so cool to race with buddies. I’m getting to race with my—I only have a few, but the last few weeks I’ve been able to race with my buddies.”

Like Chastain, Kurt Busch was collected in a major accident (Lap 145) but recovered to run third as the highest-finishing Toyota. Daniel Suarez was fourth, giving Trackhouse Racing—co-owned by Justin Marks and pop star Pitbull—two cars in the top five.

All told, 28 of the 37 cars that started the race were involved in collisions. That number included Wallace, who was collected in a wreck with Justin Haley and Buescher approaching the checkered flag. Wallace finished 13th.

Notes: Three different Hendrick Motorsports drivers have won three of the first five races this season, with Kyle Larson taking the checkered flag at Fontana and Bowman taking the trophy at Las Vegas… The race featured 11 cautions for 65 laps… Byron led eight times for 111 laps. Chastain was second in laps led with 42.

WILLIAM BYRON BRINGS IT HOME FOR HIS THIRD CAREER WIN. YOU JUST GOT OUT OF THE CAR AND SAID “THAT WAS FUN.” YOU HAVE A SUPERSPEEDWAY CAR, AN INTERMEDIATE SET UP – WHAT WAS THIS DAY LIKE IN THE END?

“It was so different. You know honestly the last few laps there, just trying to manage the gap to Bubba (Wallace) and trying to not get too far out front. My spotter Brandon (Lines), it’s his first win so congrats to him and just thanks to this whole team. They’ve done a great job this year. There’s a lot of changes with the Next Gen car.

The Liberty University Chevrolet was awesome there. We had a pretty rough practice; worked hard on it and got it handling well. Like I told you, it was kind of an intermediate style with a little bit of superspeedway to it, so it was lot of fun. Thanks to everyone at Hendrick Motorsports. Super exciting.”

HOW ABOUT THIS CROWD? PACKED STANDS HERE TO SEE AN ATLANTA RACE LIKE WE’VE NEVER SEEN BEFORE.

“It’s so cool. I think these fans saw one heck of a race. It was certainly long from my seat. It was mentally taxing. Just thanks to all the fans for coming out. Been an awesome weekend. I got the win last night in the Late Model too, so it’s been a lot of fun.

LOSE SOME LAPS, GET THE LAPS BACK. IN POSITION AT THE END OF THIS RACE, ENDED UP THIRD.

“Maybe second. What a day, Regan. That’s the fight, that’s the fight in Trackhouse. This Gen 7 car to take a lick like that, blow a tire out of nowhere leading. Just cruising, blow a right rear, slam the wall, I thought our day was over. Our guys went underneath the car, got the tow closer and we got the balance back where I could drive it and this Advent Health Chevy was fast. It was so fast. I mean we were fighting with William (Byron) there at the beginning. So cool to race with buddies again. I only have a few, but the last two weeks I’ve been able to race with buddies. Can’t thank everybody at Trackhouse, the Moose, Advent Health, everybody that’s been on this car. Justin Marks and his family for what they do for me and Daniel Suarez. What a teammate to push me there at the end.”

How different was today for you?

“We were on a different planet today with the draft and the way the cars raced. Wow. I was catching air off of turn two. I had to lift to not hit the rev chip. I just had a little too much damage to not be on offense, and then we were just trying to ride around and pick our poison so to speak with the Monster Energy Toyota. We weren’t on offense, so if you are not on offense, you kind of have to ride and wait for the holes to open up and I got a top-five again. A lot of sarcasm here. We know we need to get better with the handling and some of our race craft, but another top-five – we will take it.”

SECOND TOP-FIVE ALREADY THIS SEASON. YOU GUYS BOUNCED OFF THE WALL. YOU HAD A PENALTY ON PIT ROAD. WHAT WAS YOUR DAY LIKE?

“It was just like that, up and down. Our No. 99 CommScope Chevrolet was fast. We did a good job on pit road. We had fast pit stops. When we have a fast Chevrolet Camaro, it makes things easier. Everyone at Trackhouse Racing has been working very, very hard to build cars like this. We just have to keep it up. We have a few trophies coming in the near future.”

“We did exactly what we set out to do today. We made Atlanta Motor Speedway like a superspeedway. We missed the wrecks and put our No. 7 Fraternal Order of Eagles Camaro ZL1 there at the end and got a top-five finish. It’s great to start our season with three top-15’s and now one top-five. Hopefully, we can maintain the momentum over the next couple of weeks and put ourselves in a good points position through the summer. Thank you to everyone at Spire Motorsports and the No. 7 team for all the hard work to continue to build fast Chevy’s.”

“It was crazy, for sure. Hopefully it was fun to watch because I felt like it was wild from my seat. It was very much so like a Daytona or Talladega. Just trying to position yourself there at the right spot and hope it goes your way.”