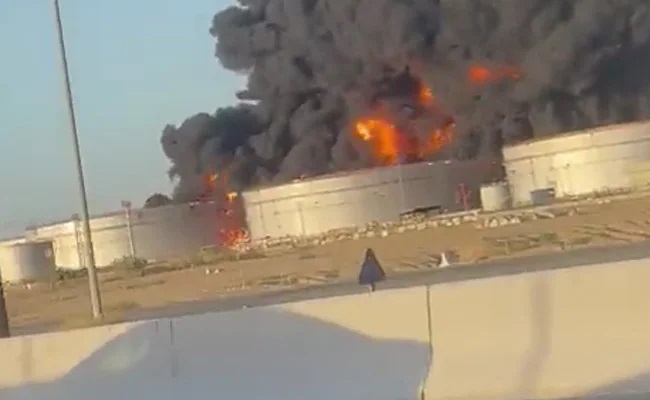 F1 chiefs have given the Saudi Arabian Grand Prix the green light despite a rocket attack just SIX miles from the track.

An Aramco fuel depot was hit by a missile and engulfed in flames, sending thick black smoke pouring into the skies midway through practice here in Jeddah.

Later in the day, a military spokesperson for Yemen’s Houthis, which have been battling a coalition led by Saudi Arabia for seven years, claimed responsibility for an attack with missiles on an Aramco facility in Jeddah.

An official F1 statement released during the evening practice session, said: “Formula One has been in close contact with the relevant authorities following the situation that took place today.

“The authorities have confirmed that the event can continue as planned and we will remain in close contact with them and all the teams and closely monitor the situation.”

A statement from the Saudi Motorsport Company who promote the event said: “We are aware of the attack on the Aramco distribution station in Jeddah earlier this afternoon.

“The race organizers remain in direct contact with the Saudi security authorities, as well as F1 and the FIA to ensure all necessary security and safety measures continue to be implemented to guarantee the safety of all visitors to the Formula One stc Saudi Arabian Grand Prix as well as all drivers, teams and stakeholders.

“The race weekend schedule will continue as planned.

“The safety and security of all our guests continues to be our main priority and we look forward to welcoming fans for a weekend of premium racing and entertainment.”

F1 chief Stefano Domenicali has told reporters that this weekend’s Saudi Arabian Grand Prix will go ahead as planned.pic.twitter.com/p1rXeYq15v

F1 has called a meeting with the drivers and team principals, which has delayed practice 2 for the Saudi Arabian GP in Jeddah 15 min.

A fire broke out at an oil depot in Saudi Arabia’s Jeddah during practice 1 of the Formula 1 race.

Oil giant Aramco has several facilities in the Red Sea city of Jeddah. Yemen’s Houthi group said on Friday that they would be issuing a statement on a big military operation “deep in Saudi Arabia”.

Videos from the spot circulating on social media show the practice racing continuing with large smoke clouds seen in the distance.

Saudi Arabia’s state oil company and state media did not immediately acknowledge the incident. However, it comes days after a similar attack on the Jeddah oil depot.

The fire seems to be centered on the same North Jeddah Bulk Plant, reports the Associated Press.

The North Jeddah Bulk Plant stores diesel, gasoline and jet fuel for use in Jeddah, the kingdom’s second-largest city. It accounts for over a quarter of all of Saudi Arabia’s supplies and also supplies fuel crucial to running a regional desalination plant.

Houthi rebels today acknowledged that they had launched a series of attacks on Saudi Arabia. Earlier today, Saudi air defenses destroyed a ballistic rocket launched towards the port city of Jazan and an explosive-laden drone launched towards Najran, near the Yemen border.

F1 cancelled the Russian GP for attacking the Ukraine, so why are we racing in Saudi Arabia when they are doing the same in Yemen?

#Breaking | A few minutes ago, the Houthis attacked Jeddah and hit Aramco’s petroleum facilities in Jeddah, west Saudi Arabia, a loud explosion was heard and a fire broke out. pic.twitter.com/IW0nivmxVt