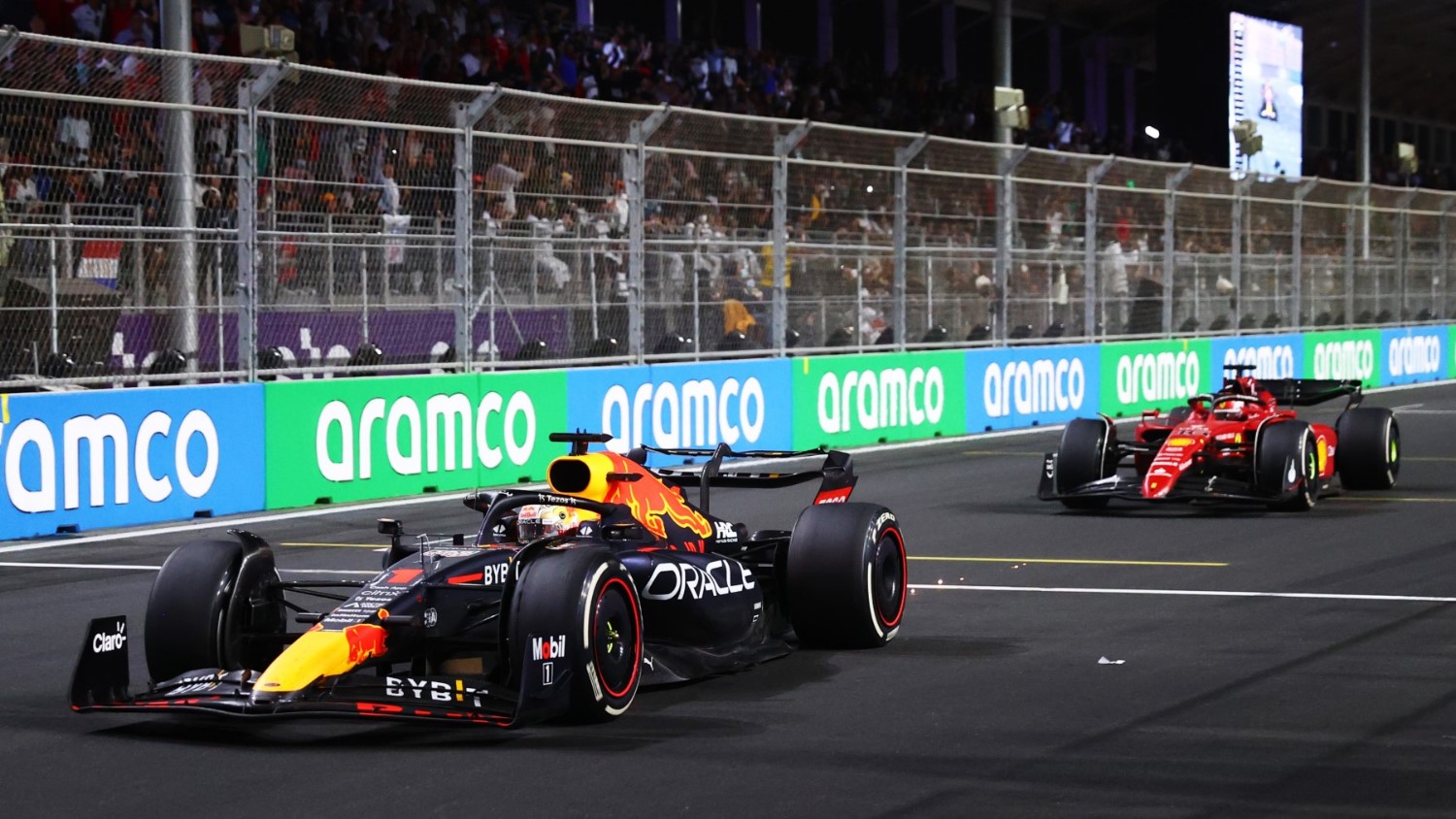 Defending World Champion Max Verstappen proved the better of Ferrari’s Charles Leclerc by passing him for the final time with 3 laps to go to win the Saudi Arabian GP by 0.549s.

In the closing stages, the two drivers had the crowd on their feet, as they swapped positions under the floodlights around the Jeddah Corniche Circuit. Verstappen made his first move for the lead on lap 42, passing Leclerc into the final corner. But with the aid of DRS, Leclerc reclaimed the position back into Turn 1 on the next lap and the Jeddah crowd cheered with delight.

The Ferrari appeared to have the pace on the first sector of the lap, but the Red Bull enjoyed more top speed and Verstappen made his move stick across the start/finish line as the pair began the 47th of 50 laps.

Verstappen bounced back from a DNF in Bahrain but Leclerc, who won in Bahrain and still leads the points with 45 ahead of his teammate Sainz Jr. with 33.  Verstappen’s win gives him 25 points and puts him 3rd after scoring zero in Bahrain.

“A good race, we were battling hard,” said Verstappen. “We just had to play the long game, the tires were wearing out quite quick. It wasn’t easy, eventually managed to get ahead – just really happy to kick-start the season.”

“It wasn’t enough today but oh my god, I really enjoyed that race! It was hard racing but fair, every race should be like this,” said Leclerc.  “We are in a street track, we’ve been pushing like I’ve rarely pushed before, so there is respect, but I’m also a little disappointed.”

“I think [Perez] got unlucky with the Safety Car, but rules are rules,” said Sainz Jr.  “After that, it was all about holding on to P3. For me, this race was progress from Bahrain, I found more rhythm with the car, still some tenths to find, but I’ll get there.”

Sergio Perez, who led from pole until his pitstop, had to settle for 4th in the #11 Red Bull.

George Russell rounded out the top-5 in the #63 Mercedes, a distant 32.7s behind.

Leclerc had taken the lead of the FORMULA 1 STC SAUDI ARABIAN GRAND PRIX 2022 on lap 17 when the Safety Car had been deployed to clear up the damaged Williams of Nicholas Latifi, after the Canadian had crashed at the last corner. A lap earlier pole position holder Sergio Perez (Red Bull) had pitted for fresh tires, but with the race neutralized behind the Safety Car, he was shuffled down to fourth place.

Perez did lead at the start, while Verstappen — from fourth on the grid — brilliantly passed Sainz for third at the first corner. In the opening stages of the race the order was Perez, Leclerc, Verstappen and Sainz until the Safety Car appeared.

When the track was clear racing resumed on lap 21 with Leclerc keeping a gap between one and two seconds to the Red Bull behind him. With the leaders only making one pitstop, Verstappen’s only chance to win the Grand Prix was to pass Leclerc on-track. Following on from their battle last week, fans watching the race unfold in Jeddah were again treated to a thrilling contest.

Behind the leaders there were exciting battles throughout the field to keep the thousands of spectators lining the Jeddah Corniche Circuit entertained. Many were watching the progress of seven-time

World Champion Lewis Hamilton, who had started a lowly 15th on the starting grid. He chose not to pit when the Safety Car appeared and ran as high as sixth at half distance.

But his race was ruined by a number of retirements on lap 37. Firstly Fernando Alonso (who was engaged in a cat-and-mouse duel with his Alpine team-mate Esteban Ocon) suffered a mechanical problem in which he reported a loss of power. Then the McLaren of Daniel Ricciardo also lost drive and slowed as he headed for the pits. With the two cars needing the assistance of the marshals, the race director neutralized the race with a Virtual Safety Car. He also closed the entry to the pitlane. That scuppered Hamilton’s opportunity to take advantage of the VSC and at the checkered flag he could only manage tenth place.

After the race the crowd stayed behind to enjoy the firework display that lit up the Arabian night sky, bringing to a close an exciting weekend of racing.