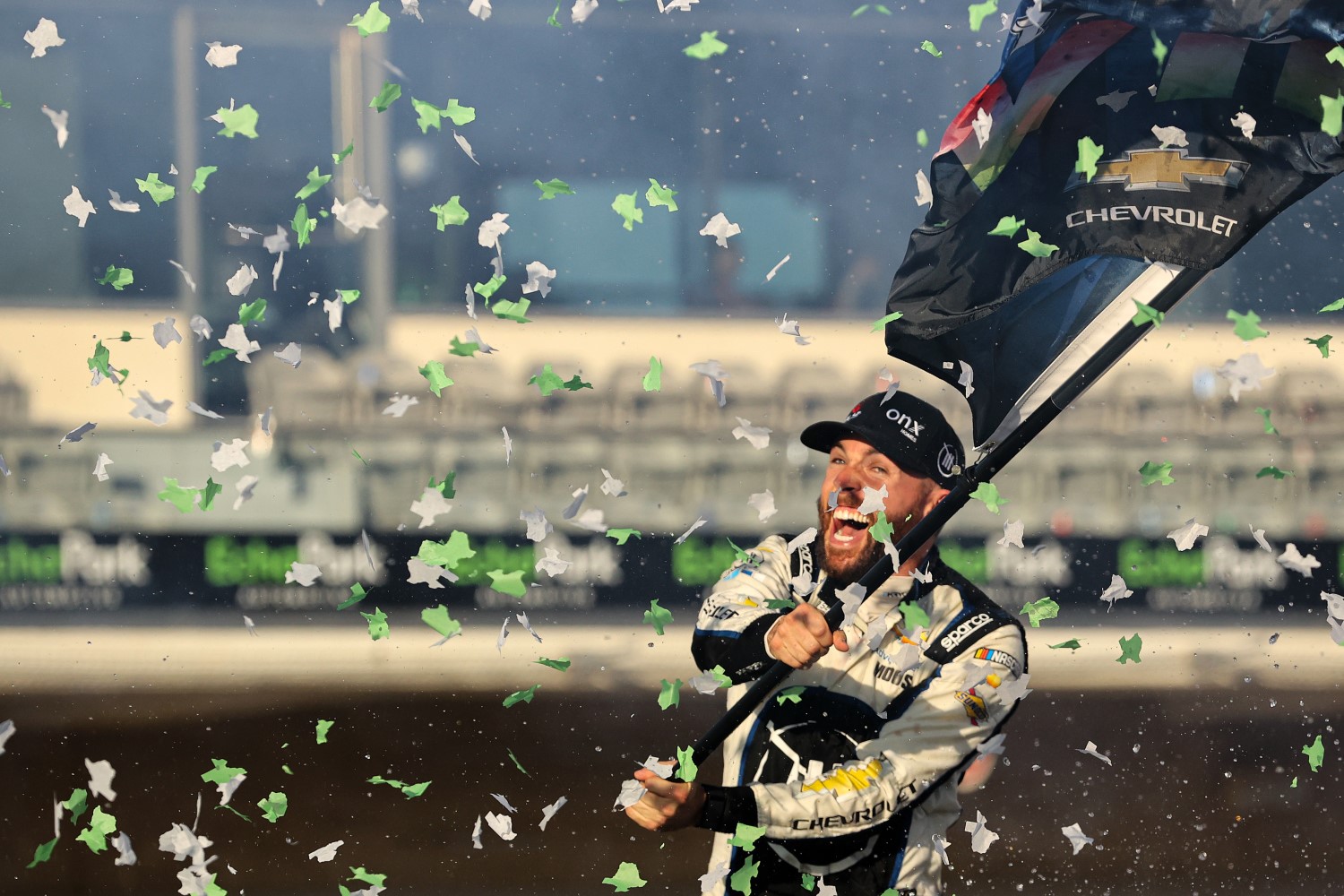 AUSTIN, Texas – In exactly the kind of thrilling final lap, final-turn high-action finish NASCAR has so often provided on road courses, Ross Chastain persevered in the EchoPark Automotive Grand Prix to win his first career NASCAR Cup Series race at the Circuit of The Americas in Austin, Texas – the sixth different winner this season.

Chastain really had to earn this one – coming out on the right end of a frantic, four lead-change, two-lap final overtime. And he did – moving veteran A.J. Allmendinger and Alex Bowman in the final series of turns on the 3.41-mile, 20-turn circuit to take not only his first victory in NASCAR’s premier series but also give his Trackhouse Racing’s Justin Marks his first win as a new owner in stock car’s big leagues.

After grabbing the position in the final corner, Chastain raced off to a 1.331-second victory over Hendrick Motorsports driver Bowman, who unlike Allmendinger was able to recover from the last lap contact and continue to the checkered flag. Joe Gibbs Racing’s Christopher Bell, Hendrick Motorsports Chase Elliott and Richard Childress Racing’s Tyler Reddick rounding out the top five.

Chastain’s family owns a watermelon farm in tiny, rural Alva, Florida and as he has famously done with past victories in both the NASCAR Camping World Truck Series and Xfinity Series, Chastain stood on top of his winning car, the No.1 Trackhouse Racing Chevrolet, and dropped a watermelon to the track, crushing it on the ground as his team and fans exploded in cheers.

“It’s insane to go up against some of the best and I know he’s [Allmendinger] going to be upset with me, but we race hard, both of us,” said Chastain, who has been runner-up in the last two NASCAR Cup Series races coming to Austin.

“But when it comes to this Cup win, I can’t let that go down without a fight.”

Allmendinger, who actually was a NASCAR Xfinity Series teammate with Chastain two years ago, was understandably crushed as well after the race. He finished 33rd.

“Everybody’s got to be comfortable with the move they make and look in the mirror,” Allmendinger told FOX Sports. “Everybody’s different on what they view, and you can’t judge a person for that.

“So, at the end of the day, I’m just proud of Kaulig Racing for bringing such a fast Action Industry Chevrolet. We started at the back, drove to the front and if we had had a long run [at the end] it would have been game over. Nobody would have touched me.

“You know the moves are going to be made at times. Whether I’m okay with it, doesn’t really matter.

“I wanted to sweep the weekend and we came two corners away,” he added.

Chastain led a race high 31 of the 69 laps – one of nine leaders in the series’ first road course test with the Next Gen cars debuting this season. The race produced a series road course record  of 30 green flag passes for the lead.

And the 29-year-old Floridian becomes the 12th consecutive NASCAR Cup Series race winner under the age of 30 and the third first-time winner this season.

It was as equally a thrilling maiden win for the former NASCAR and sportscar driver Marks, who was interviewed during the FOX telecast just before the final restart, revealing with a smile that “It’s a little easier to be a driver of one these things than to watch.”

“It seemed like a real tall order when I dreamt this thing up,” Marks said. “But every man and woman that’s trusted the vision and committed to Trackhouse and worked so hard owns a piece of this victory.

“I’m so happy for everybody. Everybody believed in this, and I can’t wait for next week.”

And, he reported with a grin, he spoke with the team’s co-owner, music superstar Pitbull who promised he also was smashing a watermelon over his head and drinking champagne.

Chastain has been so close this year to getting that first career win. Ross, today you couldn’t be denied. You had to fend them off at the end. You go from first to third. There was beating, there was begging. What was that last lap like, and what is this first win like?

ROSS CHASTAIN: I don’t know. It’s insane. To go up against some of the best with AJ, I mean, I know he is going to be upset with me, but we raced hard, both of us, and he owes me one.

But when it comes to a Cup win, man, I can’t let that go down without a fight. So, Justin Marks, Trackhouse, AdventHealth, the Moose. A million Moose members, they better be celebrating tonight all across the country and the world.

Phil Surgen, man. He is so good. People don’t know how good this group is. I can’t believe Justin Marks hired me to drive this car.

You lost control of that final restart. You get a good restart on the outside, which nobody had done. What did you have to do to make that happen, and how is that watermelon tasting right now?

ROSS CHASTAIN: It’s never tasted sweeter, I got to tell you. I don’t know. I don’t know how we got back by. I was so worried about AJ on the second-to-last restart that I let Tyler drive right by both of us.

Chevrolet, everything they do for me gave me the tools to try to go execute and we did it.

It was quite a battle between Ross Chastain and Alex Bowman. Alex, you ran there in the top ten all day, but you almost snuck that one away. What’s your take-away from that last couple of laps there and battling for the win?

ALEX BOWMAN: For sure, just we had a really fast ally Camaro. I’ve been trying to do a better job as a race car driver at these road courses, and I felt like from where we started the weekend, I accomplished that. So proud of Greg and all the guys.

Hate that we can’t come away with a win, but happy for Ross getting his first win. It’s been a crap weekend, so I’m ready to get home and see the dogs and move on to next weekend. Glad to come away with a second-place finish.

I just told him how entertaining that was with you running up front, but, unfortunately, your day ended in the care center. What is your take on what happened between you and Ross Chastain there at the end?

AJ ALLMENDINGER: At the end of the day, we all have to look ourselves in the mirror. If you are okay with it, you’re okay with it. Each person is different.

More than anything, proud of Kaulig Racing. Action Industry Chevy was so fast. If we had a long run, nobody was going to touch us. So pit stops are great.

Everybody at Kaulig Racing, all the men and women, it’s just a lot of sleepless nights for them right now trying to just get these cars to the next race. So, I was doing everything I could do to try to sweep the weekend for them. We were that close.

So like I said, at the end of the day each person has to make the move that they’re comfortable with, and that’s fine. So we’ll — at the end of the day it’s — we know we had a shot to win the race. It’s tough to win a Cup race, so when you put yourself in a position to legitimately run up front all day and have a shot to win it, it’s a pretty great day. Unfortunately, just we needed about two more corners.