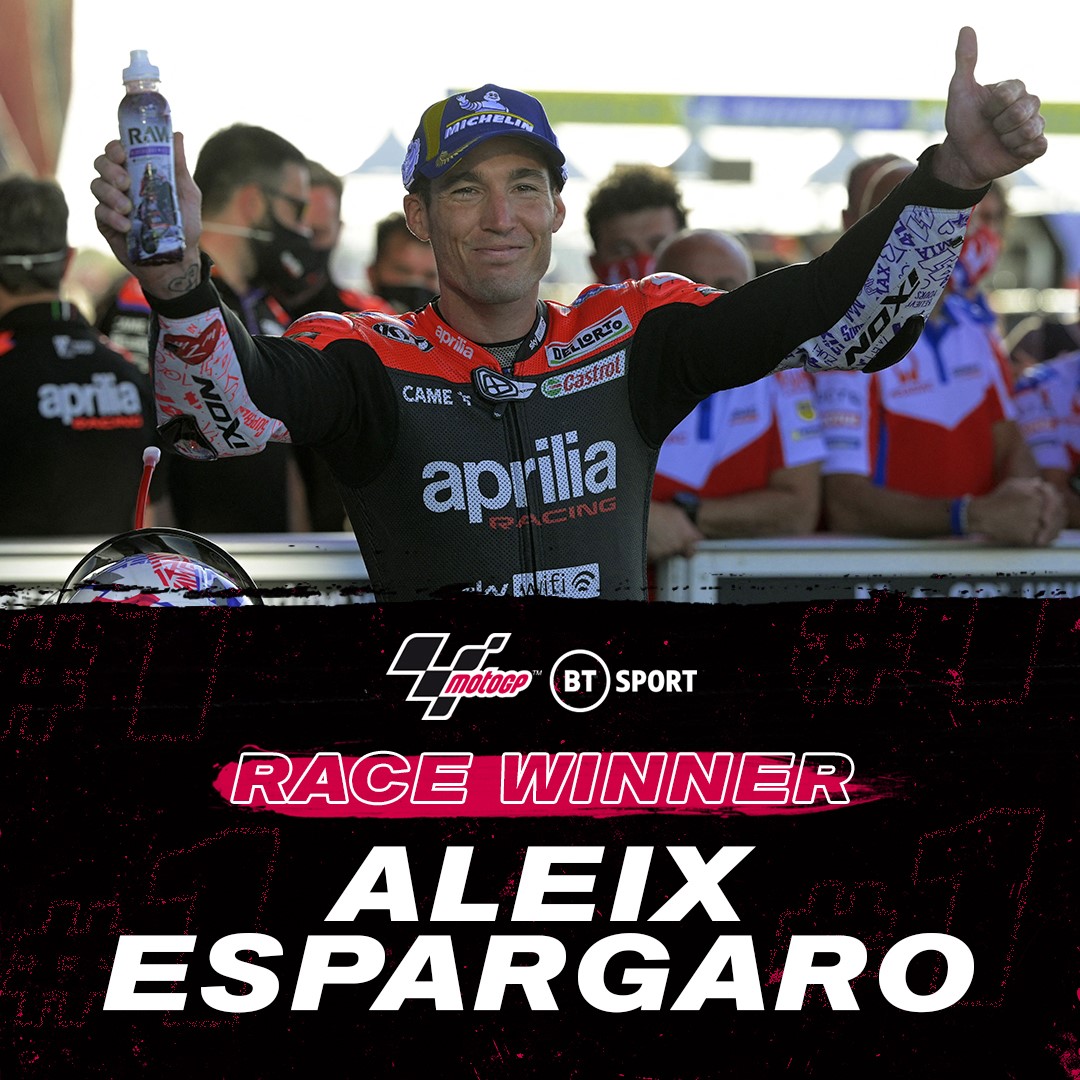 Making his 200th MotoGP race start this weekend, Aleix Espargaro won Aprilia’s first modern era pole on Saturday and then backed it up with his first-ever MotoGP victory.

For the first time since 2019, it was lights out in Argentina and getting away superbly from the middle of the front row was Martin. The Pramac star grabbed the holeshot, Pol Espargaro (Repsol Honda Team) launched well from the second row to slot into P3, just behind polesitter and older brother Aleix Espargaro.

The top two, Martin and Aleix Espargaro, then started to stretch clear. The gap was up to a second pretty rapidly as Pol Espargaro and Rins battled past Luca Marini (Mooney VR46 Racing Team), as a whole host of riders sat line astern. Reigning World Champion Fabio Quartararo (Monster Energy Yamaha MotoGP™) had dropped back to P13 from the second row, he had Indonesian GP winner Miguel Oliveira (Red Bull KTM Factory Racing) behind him and the likes of Johann Zarco (Pramac Racing), Takaaki Nakagami (LCR Honda Idemitsu), Enea Bastianini (Gresini Racing MotoGP™) and Francesco Bagnaia (Ducati Lenovo Team) in front of him.

As one Pramac Racing Ducati set the fastest lap of the race, the other crashed out at Turn 2. Martin edged out a 0.4s gap to Aleix Espargaro in the chase for victory, while Zarco tucked the front on Lap 7. Martin and Aleix Espargaro had two seconds to Rins and Pol Espargaro, Joan Mir (Team Suzuki Ecstar) was now P5 ahead of Marini, who in turn had Maverick Viñales (Aprilia Racing), Bagnaia and Brad Binder (Red Bull KTM Factory Racing) for close company.

Lap 10 of 25 saw Aleix Espargaro run wide at Turn 1, losing 0.4s, and then the Aprilia man ran wide at Turn 5 – two mistakes in five corners cost the Spaniard 0.9s and now, Rins was just a second in arrears. Martin’s lead, with 15 laps to go, was up to just over a second. The response from Aleix Espargaro? The fastest lap of the Grand Prix – a 1:39.375, 0.4s quicker than Martin.

With 11 laps to go, while running P4, Pol Espargaro crashed out unhurt at Turn 2. That promoted Mir to P4, but the 2020 World Champion had two seconds to bridge if he wanted to fight his teammate Rins for the final podium spot. Aleix Espargaro had regrouped and was now back to where he was before the double error – 0.3s behind Martin’s bellowing GP22.

The first hint of a move came with eight laps to go. Aleix Esaprgaro moved out the slipstream and was ahead, but it was only briefly. Hard on the anchors, Espargaro couldn’t get his RS-GP stopped at the apex and Martin was back through. This was compelling. Rins was not out of this either, the Suzuki man was just 1.3s off the leading duo with seven laps left.

A lap later, it was copy/paste at Turn 5. Still no way through for Espargaro, who looked like he had a bit of pace in his pocket over Martin. And then, at the third attempt at Turn 5, Espargaro was through. Four and a half laps to go, Aprilia and Espargaro were leading.

Three to go. Martin hadn’t been dropped by Espargaro, and Rins was now 0.8s behind Martin. Two to go. 0.2s split the top two, Rins was still just under a second away from Martin.

Heading onto the last lap, Aleix Espargaro had given himself 0.6s breathing space. A monumentally huge lap was incoming for the number 41 and Aprilia, 4.8km of asphalt was all that separated him from a dream debut victory. Turn 5 was safely negotiated. Turn 7 too. Three corners left for Espargaro quickly become two. Turn 13 was safely deposited, no attack from Martin was coming, and flicking his RS-GP left, Espargaro took the chequered flag in P1 for the very first time, handing Aprilia their first premier class victory. Emotion, relief, pandemonium.

Martin had no answer in the end for Espargaro but second place is crucial to kickstart his World Championship after two DNFs in Qatar and Indonesia, as Rins completed the podium for his first visit to the rostrum in 2022.