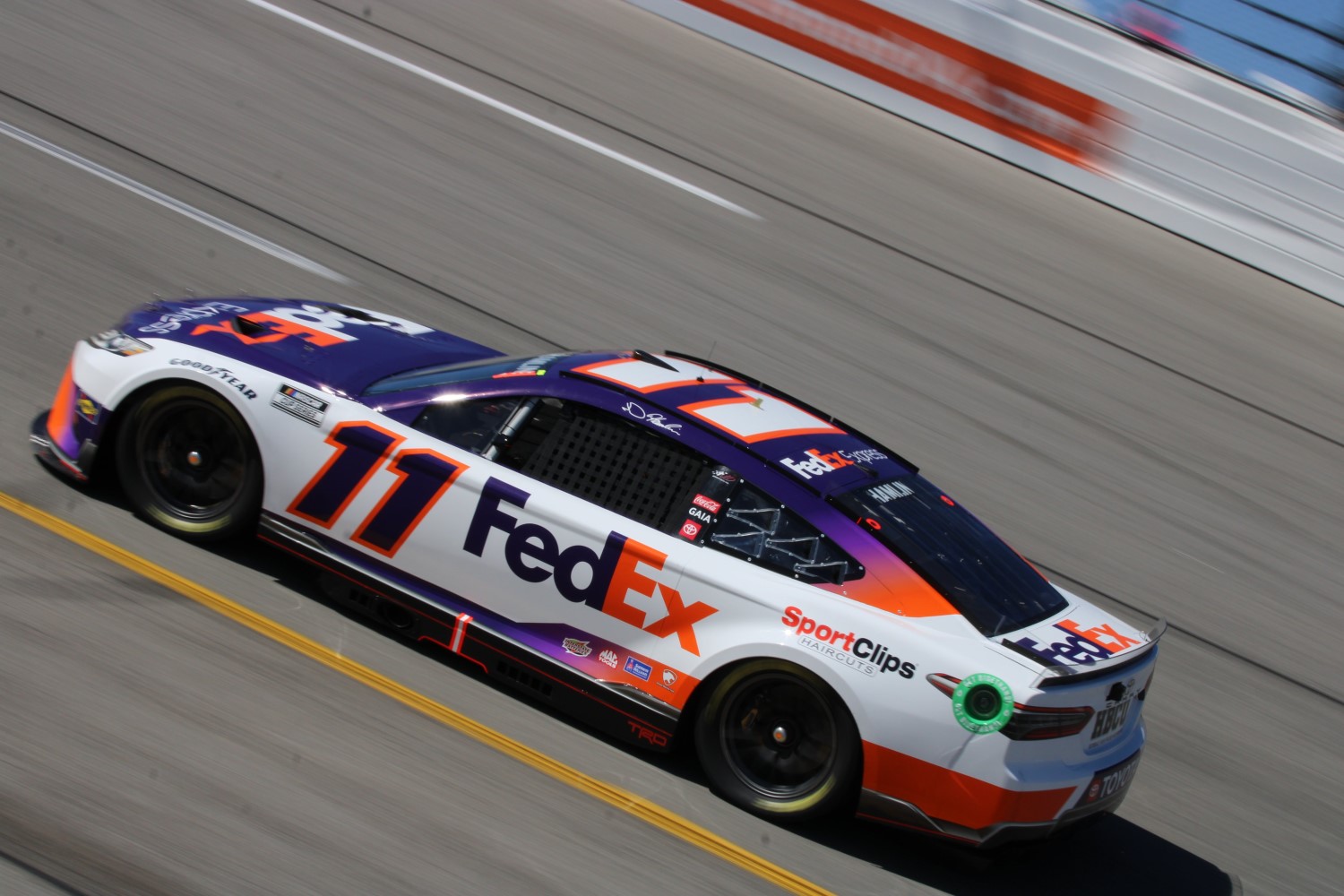 Virginian native Denny Hamlin used fresher tires by making an extra pitstop to run down #24 Chevy of William Byron on worn tires with 5 laps to go to win the Toyota Owners 400 NASCAR Cup race at Richmond, VA in his #11 JGR Fed Ex Toyota.

Kevin Harvick, also on fresher tires, was able to pass a struggling Byron for 2nd.

The victory was also significant in that the 41-year old Hamlin stopped a 12-race victory run by drivers 30-year old or younger – a mark dating back to last season.

“Just drove as hard as I could,” said Hamlin, a perennial championship contender who had been ranked an uncharacteristic 20th in the standings before the Richmond race.

“So proud of this whole FedEx Camry team, they just never gave up.

“There was no doubt in my mind, maybe just a little, but they got this car right there towards the end,” Hamlin continued. “Wow this it’s just unbelievable.”

“We needed a data point, something, a good run to kind of balance ourselves on other tracks. Obviously, I think we got it here.”

“Really it’s the first clean day we’ve had all year,” said the 2014 series champion Harvick. “The cars have been fast and we had a shot there at the end just, I wanted to be close enough at the white [flag] to just take a swipe at him but the lapped cars got in the way and I lost a little bit of ground. Still a great day for us and hopefully a little bit of momentum.”

Blaney’s No. 12 Team Penske Ford led the field to green from the pole position and held the front spot all the way through until Lap 129 — the longest leading run. That included a Stage 1 win on Lap 70, marking his third stage victory of 2022. Truex Jr.’s No. 19 Joe Gibbs Racing Toyota captured Stage 2 on Lap 230, also his third stage win this year.

There was only one caution during the first two stages, coming on Lap 9 when Kurt Busch’s No. 45 23XI Racing Toyota stopped on the backstretch. He ultimately registered a DNF and was left 35th on the 37-car results sheet.

The final 170-lap stretch had two cautions. Each featured a three-car incident.

Blaney (first) and Truex (second) each won a stage and are the only three-time stage winners so far this season.

Blaney and Elliott are now tied for the NASCAR Cup Series championship lead with a 19-point advantage on third place Truex.

Denny, that is about the most pumped up I have ever seen you. Where did you come from?

DENNY HAMLIN: Yeah, just great strategy there. Just drove as hard as I could. Just so proud of this whole FedEx Camry team, man, just never giving up.

There was no doubt in my mind, maybe just a little, but they got this car right there towards the end. Wow, unbelievable.

It hasn’t been an easy start to the season. Not even a top 10 through the first six races. What does this win mean to you, to Toyota, to kick things off here at your home track?

DENNY HAMLIN: I talked to you before the race, we needed a data point, something, a good run to kind of balance ourselves on other tracks. Obviously I think we got it here.

Kevin Harvick, the end of the race you were chasing him down, right there. Just fell a little bit short.

KEVIN HARVICK: Yeah, just proud of everyone on our Ford Mobil 1 Mustang for staying there and having a great strategy and doing everything they did all day. First clean day we’ve had all year. Cars have been fast.

Had a shot there at the end. I wanted to be close enough with the white to just take a swipe at him. Yeah, the lap cars there kind of got in the way and I lost a little bit of ground.

Still a great day for us. Just hopefully a little momentum in a positive direction.

“Thought we probably did the best job we could. It didn’t quite work out. I thought there at the end they told me I was just racing the 19. I’m like ok I got him, but then the 4 and the 11 were on a totally different planet. That’s just part of it. There wasn’t anything I could do about them, so it was probably four or five to go and Brandon (Lines) was coaching me on keeping the tires underneath it and having good exits and entries. Especially making those guys go around me on the top was definitely better. The times that guys would get underneath me was really, really hard to get back connected and get a good lap put together. The middle of the race we were terrible and we just couldn’t get in the corner at all and if you can’t get into the corner you can’t put consistent laps together. It’s nice to have a run like we had today.”

“I assume we netted out good with our strategy or better than we were. I didn’t think those guys the 11 and the 4 were going to get to us, but then all of a sudden, our tires kind of fell off a cliff there and got really slick. We just kind of had to nurse it home. Glad we got a top-five after three bad finishes in a row. We will move on to Martinsville and try to get a good run there.”