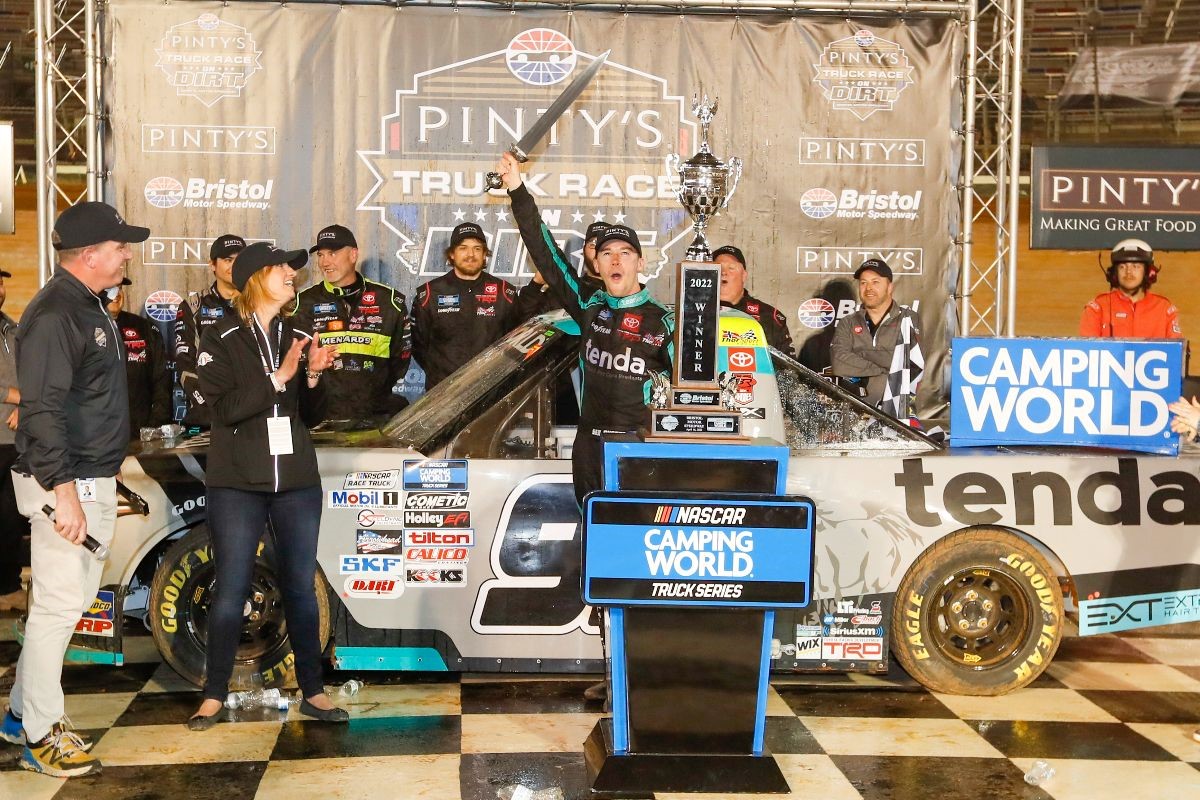 Overcoming a mistake in communication, Ben Rhodes charged to the front in the closing laps of Saturday’s Pinty’s Truck Race on Dirt at Bristol Motor Speedway and snatched the NASCAR Camping World Truck Series victory from runner-up Carson Hocevar.

One circuit after the final restart on Lap 146 of 150, Rhodes, the defending series champion, buried his No. 99 ThorSport Racing Toyota into Turn 1, slid to the outside of third-place finisher John Hunter Nemechek and dived to the inside of Hocevar to take the lead.

The dramatic charge to victory atoned for Rhodes’ failure to bring his truck to the pits at the end of the first stage on Lap 40 after missing his entrance to pit road. Forced to pit after winning Stage 2, Rhodes restarted 13th on Lap 91 and worked his way forward with the aid of four cautions in the final 60-lap stage.

“My crew gave me such an awesome Tundra this weekend that I wasn’t going to let them down,” said Rhodes, who led 95 laps and won the first two stages on the way to his first victory of the year and the sixth of his career. “I had to go back up there and earn the spot back. I’m really proud of all their effort.”

Rhodes and Hocevar were the only two drivers credited with leading laps. The driver of the No. 42 Niece Motorsports Chevrolet grabbed the top spot after restarting fourth on Lap 91 and held it until Rhodes passed him for the win.

In hindsight, Hocevar said he could have done a better job defending against the decisive pass.

“Either ripped the top or crashed him,” Hocevar said of his alternatives. “I hate saying that, but it’s part of this racing, right? I just couldn’t compete with him. He just had better (fresher) tires, and he was the fastest truck all day. I was just trying to hold on…

“He slide-jobbed me, and I should have prepared for it, crossed him over and race him really hard. Second just sucks. It’s terrible, especially being that close.”

The race marked the NASCAR national series debut of reigning USAC National Midget champion Buddy Kofoid, who started 32nd after his No. 51 Toyota overheated during the first qualifying heat earlier in the afternoon.

Methodically working his way forward, Kofoid ran as high as third before spinning in Turn 2 as he tried to cross over to the inside of Rhodes’ truck in a battle for fourth place on Lap 139, after Rhodes drove deep into the corner and slid toward the top of the track.

Collected in the ensuing wreck were Ty Majeski, who saw a probable top-five effort go awry, and Derek Kraus.

The race also had a taste of the bizarre. On Lap 96, Austin Wayne Self nudged the Chevrolet of hard-luck Matt DiBenedetto after the latter had passed Self. The front bumper of Self’s Silverado locked with the rear bumper of DiBenedetto’s Chevy, and the two drivers could not power them apart.

It took a red flag and a handful of track workers to separate the trucks. That incident ruined the race for both drivers, but the subsequent restart on Lap 106 put Rhodes on his path to the eventual victory. By the time caution flew again on Lap 112, he had climbed to fifth and was well on his way to the front.

Did you learn some of what you learned watching the Chili Bowl this year?

“I tried to. I really did. It was a tough race once the track started to slick off. It held moisture in different pockets around the track. It was hard to hunt for the grip, but luckily I had a really good team behind me telling me where to go and where they tried to see it. I just tried to follow their instruction. I had a bad fast Tenda Toyota Tundra.”

What were you thinking as you were driving through the field?