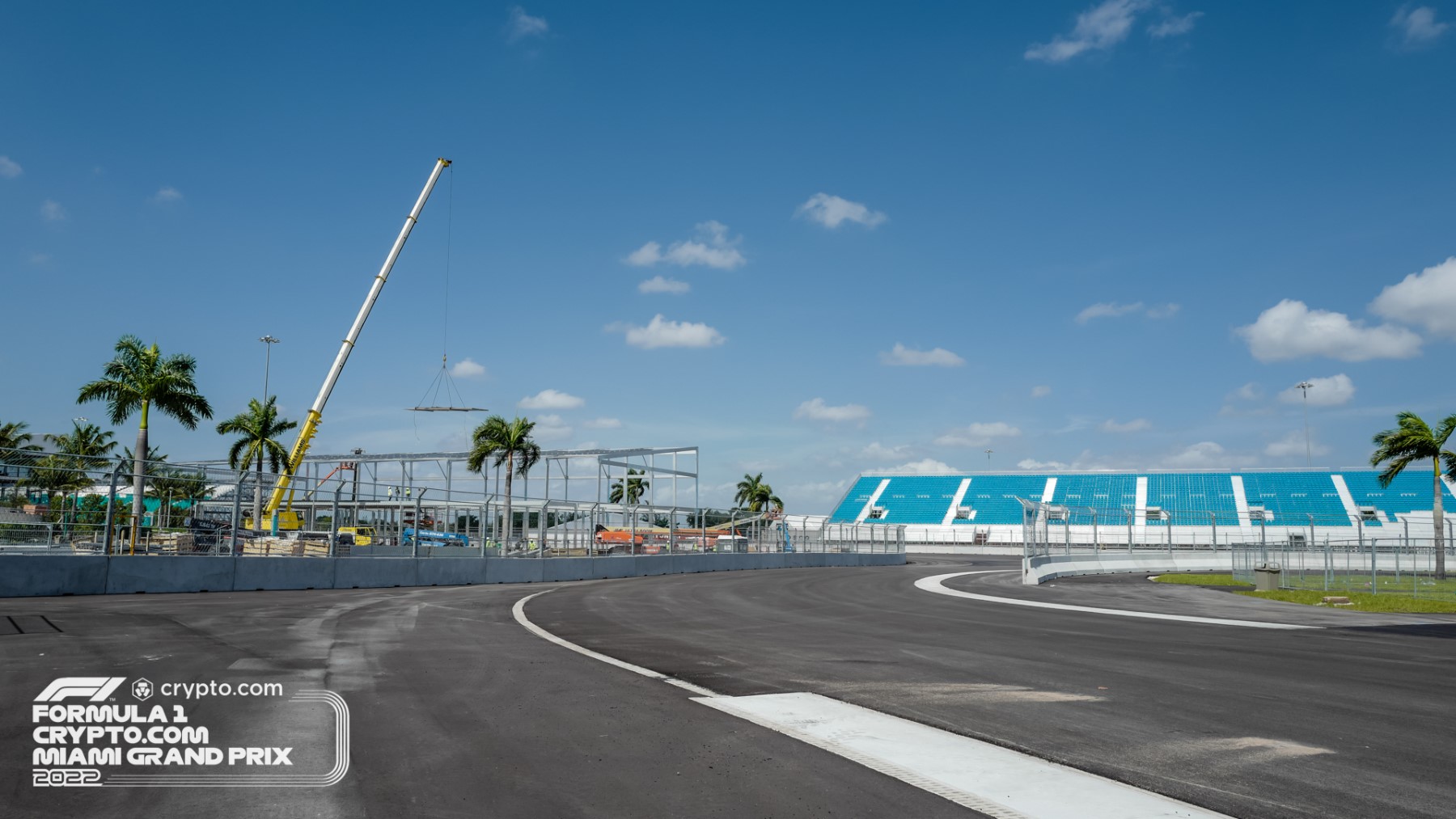 MIAMI GARDENS, Fla., The construction of the Miami International Autodrome is “95 per cent complete” ahead of its staging of the first-ever Formula 1® Crypto.com Miami Grand Prix on May 6-8, 2022. Work on the 5.41km circuit started in April 2021 and all permanent structures, such as the Pit Building, Garages and Race Control Tower are close to completion, and the final lift of asphalt laying was finished in March. The focus in the final weeks will shift to the final fit of the temporary structures around the Miami Campus and minor works, such as painting curbs, which is already underway, and installing temporary safety barriers.

“We’re in the final stages of this incredible circuit that will host the first-ever Formula 1® race in Miami,” says Richard Cregan, CEO of the Formula 1® Crypto.com Miami Grand Prix. “We are delighted with the progress we have made and it’s a huge credit to the hard work of the team here in Miami, in consultation with both Formula 1® and the FIA to get this circuit finished in a tight timeline. We have tried to create a track that drivers love to race on and a campus that offers unique, best-in-class fan experiences; and we can’t wait for the first weekend in May to be here.”

The state-of-the-art Miami International Autodrome has been constructed in Miami Gardens within the campus of the Hard Rock Stadium, home of the Miami Dolphins NFL team. The 19-turn track is the newest circuit built to host a round of the FIA Formula 1® World Championship. The circuit features three straights — the longest being 1.28km in length — three DRS zones and simulations predict drivers will be on full throttle for 58 per cent of the lap, with an estimated top speed of 320km/h.

Planning of the Miami International Autodrome began in the summer of 2019, while the ground-breaking process started in April 2021. Over the past 12 months, 24,000 tons of asphalt have been laid, with the final top lift completed in February 2022. The foundations of the Pit Building started on September 1, 2021 and a total of 1,130 tons of concrete has been used across the site.

The layout of the track has been formulated by Clive Bowen’s Apex Circuit Design company and work on the design has taken place in close consultation with both Formula 1® and the sport’s governing body, the FIA, to ensure the track is a challenge for the drivers and adheres to the rigorous safety standards of a modern Grand Prix facility.

Around the 5.41km circuit, a total of 2,870 Geobrugg blocks have been installed with 118 in place along the Pit Wall. Extending the length of the Miami International Autodrome are 37,000 feet of concrete barriers and debris fences (the equivalent to seven miles in length). There are also 14 pedestrian bridges that span the track — the most of any F1® circuit — to enable ease of access around the Miami Campus.

“There has been no compromise on any aspect of the circuit design or quality of construction,” says Cregan. “In my experience of working with new venues over the years, I’ve never seen as much effort on perfecting the surface of the track as we have done in Miami. Everything was exactly per the design, and everyone involved in construction has done an incredible job.”

The Miami International Autodrome will roar into life on the weekend of May 6-8, 2022 and will be the 11th different venue in the USA to host a Formula 1® race since the championship started in 1950. This year’s inaugural event will form round five of this season’s 23-race schedule.