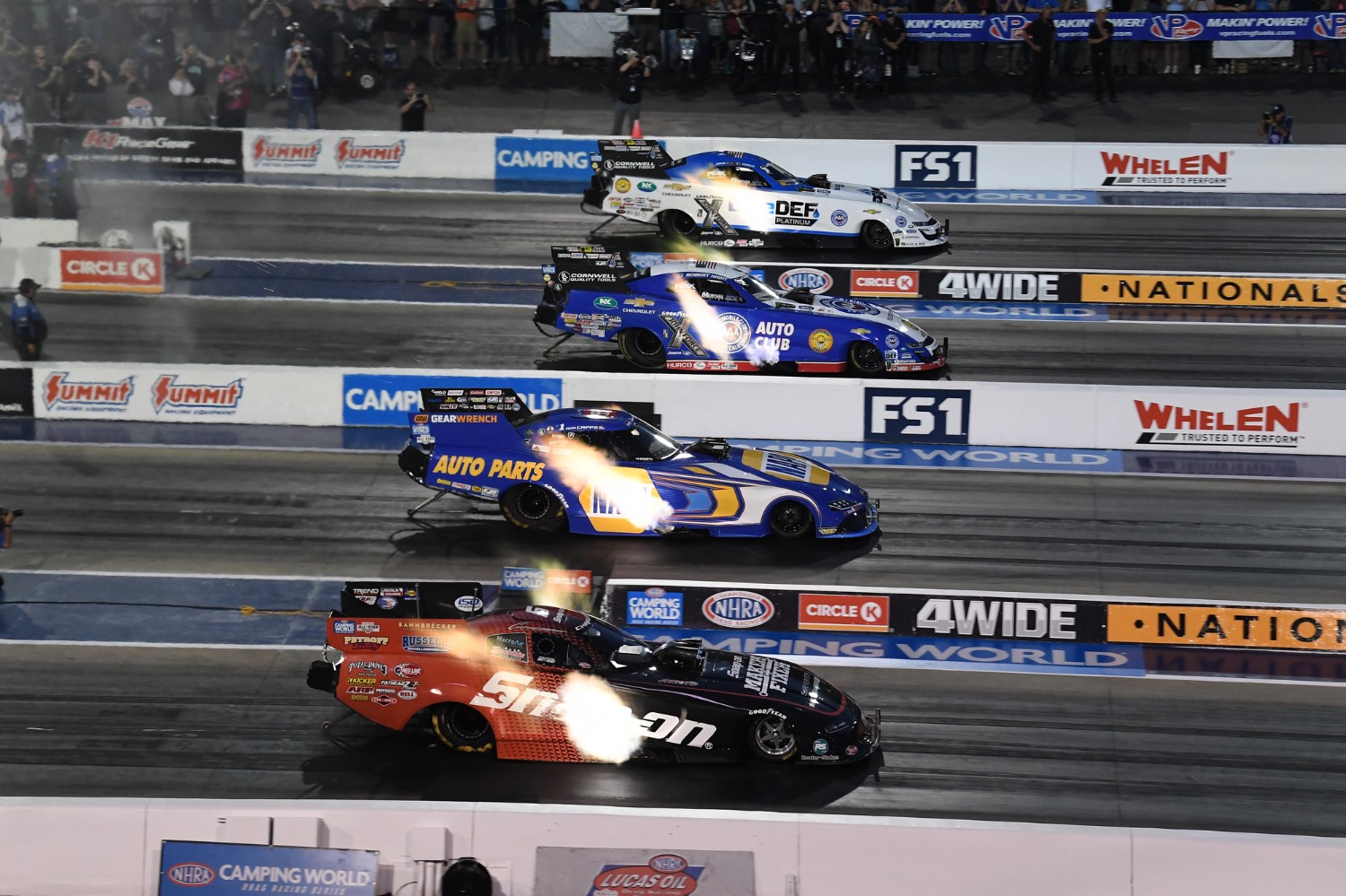 After a thrilling day of qualifying, Justin Ashley, John Force, and Steve Johnson are the provisional qualifying leaders at the Circle K NHRA Four-Wide Nationals at zMax Dragway.

After pounding out a strong 3.669, Justin Ashley is halfway to what would be his first No. 1 qualifying berth in his brief 38-race Top Fuel career, adding to an already spectacular season in which he signed a new sponsorship with Phillips Connect and won the season-opening Winternationals.

“We obviously went to the top spot in Q1, but we felt relatively comfortable because we knew we ran that in Q1 so we can get after it in Q2. We felt like at the very least we were solidly in the show, so we felt good about that. We looked at the sheet, we knew Steve Torrence was up first pair, so we knew that No. 1 qualifier should last about a pair, and, sure enough, it did. But you know, we had our shot. And we took it and came out on top for today.

“We’ve been fortunate to accomplish a lot in a short period of time. But the one thing that’s kind of eluded us so far is that No. 1 qualifier. It’s obviously great to be able to qualify No. 1, but it’s really about positioning yourself well for raceday. That was the objective to come out here today and be able to accomplish that. And Mike Green Tommy DeLago did a fantastic job. And it was a fun ride.”

Perennial No. 1 qualifier and Houston champ Brittany Force sits seventh in the field with a 3.725, a pass identical to that registered by teammate Austin Prock, but Force earned the higher spot due to her superior speed.

Eight-time world champ Tony Schumacher sits on the bump of what already is a very quick field with a 3.895. Eighteen drivers are trying to make the 16-car cut for Sunday’s final eliminations.

“We’ve been looking for consistency and then it ran that 85 [in the first session], and I went back to [crew chief] Daniel Hood and I said, “I kind of thought you’re gonna calm this down and see what it can do and get us on the show.’ He said, ‘Well, I did calm it down and it just ran.’ So he said, ‘I’m gonna back it down a little bit more [for Q2], but the air tuned it up and it ran quicker,” related Force.

“It was straight as an arrow. I was waiting for it to get loose somewhere, but, boy, it stuck. And that Chevy has really got some good aerodynamics. I didn’t have to do anything, just let it take me, and that’s when it’s at its best.”

Points leader Matt Hagan, who won this event way back in 2013, also improved on his opening lap of 3890 with a 3.867 to grab the No. 2 spot in the Shelor Motor Mile Charger. Ron Capps is third in the debut of his new Toyota GR Supra with a 3.873 that bettered his opening 3.885 pass and slots him third halfway through qualifying.

The early qualifying results in Pro Stock Motorcycle don’t look much different than last week’s event in Houston with Steve Johnson taking the top spot following a 6.767 on his Suzuki. Johnson, who dominated the Houston event, currently holds the top spot over Angelle Sampey, who also ran 6.767, but at a slightly slower speed. Johnson got the top spot and the bonus points that accompany it, thanks to a 198.70 top speed to Sampey’s 196.19 effort.

Johnson had a shot to improve in Q2 but his bike was pushed off the starting line with a substantial amount of smoke coming from under the body work.

“In Q2 we had a problem. The engine guy hasn’t slept and forgot to tighten the bolts on top of the engine,” said Johnson, who admits he’s the “engine guy” he’s referring to. “I can’t believe we didn’t oil the track. Mistakes happen. It was loose in round one but we got down the track.

“The bike was good [on Q1] and if I rode it better we’d have run faster. These bikes are very challenging to ride. Now, in all fairness a 7.0 bike isn’t the same as a 6.7 bike but we’re definitely in a new realm. A rider has to do an incredible job because there is a lot going on in six and a half seconds. You’ve got to ride it perfectly.”

Sampey’s teammate, Eddie Krawiec made a pair of 6.7-second runs including a 6.779 on his Vance & Hines Suzuki for the third spot while Jimmy Underdahl, also found the 6.7s with a 6.793 on his Suzuki, which is tune by Matt Smith with the help of Underdahl’s father, Greg, and Gary Stoffer.

Gainesville winner Karen Stoffer ran 6.813 on her first run, but her second qualifying pass is the one everyone in Charlotte is talking about. Stoffer was well past the half-track mark when she suffered a near-disaster when the fairing on her Big St. Charles Suzuki came lose, upsetting the bike’s aerodynamics. The front of the bike became airborne, but Stoffer was able to quickly get it calmed down and got stopped without further incident.

Another noteworthy performance was turned in by Angie Smith. The North Carolina native is anxious to move past last week’s Houston event where her Denso Buell broke before he first round. Smith made a strong first impression at 6.825 seconds and also posted what promises to be the first of many 200-mph speeds with a 200.44 blast from her Denso Buell.