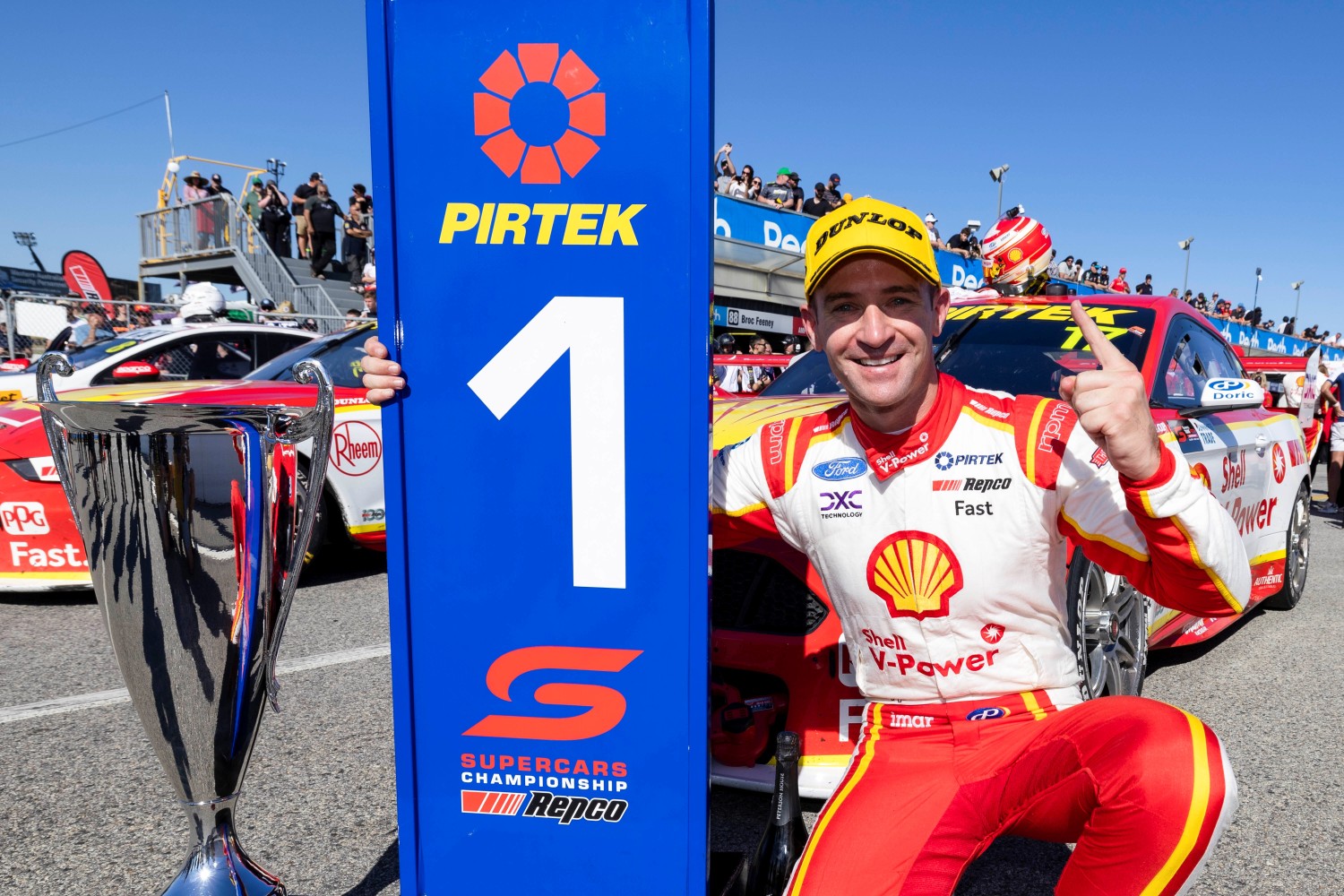 Will Davison has snapped a six-year winless drought in a Bunnings Trade Perth SuperNight thriller.

Davison secured Ford’s first win of 2022 and ended Holden’s 13-race win streak that dated back to Sydney in November 2021.

The Shell V-Power Racing Team driver scored his 20th career win, and first since Bathurst 2016 in a race filled with controversy, including a five-second time penalty for Cam Waters who crossed the finish line first.

Davison’s victory was one of a handful of storylines to come out of the race.

It started with Lee Holdsworth and Thomas Randle colliding on the first corner, both drivers were able to return to pit lane and do repair work to re-enter the race.

On the opening lap, Nulon Racing’s Scott Pye was turned at 175km/h by Jack Le Brocq on the main straight.

As a result, Pye speared off, and the rear of his Commodore smashed into a concrete barrier, destroying his Supercar and causing a near 40-minute delay in racing.

Davison crossed the line second behind Cam Waters, who was penalised for an unsafe re-entry.

It came after Davison attempted an overtake on leader Waters following the stops.

The race was suspended after a first-lap accident for Scott Pye. Pye found the pit wall barrier after contact with Jack Le Brocq.

The race was suspended for over 50 minutes as a gate on the pit straight was repaired.

The race restarted on lap 6, and Waters immediately began to open up a margin.

By lap 19, the margin between the two Fords was two seconds.

On lap 24, Davison was brought in; Tickford responded a lap later with Waters.

The two-second margin was whittled away thanks to a fast stop and out-lap for Davison.

Davison made his move to overtake at Turn 7. As Waters tried to hold on, the pair scraped paint off the Mustangs before Waters went wide of the turn.

The Monster Energy Mustang re-entered in front of Davison, however Stewards ruled minutes later it was an illegal re-entry and Waters was handed the five second penalty.

Waters pushed the margin out to 1.8s in an effort to make up the time.

However, the race was neutralised for a second time when Will Brown came to a halt at Turn 2.

The race restarted on lap 40, and Waters sprinted away in the lead.

De Pasquale made it an effective DJR one-two when he cleared Brodie Kostecki on lap 43.

Waters crossed the line 1.4s ahead, but dropped to fourth behind Davison, De Pasquale and Heimgartner. 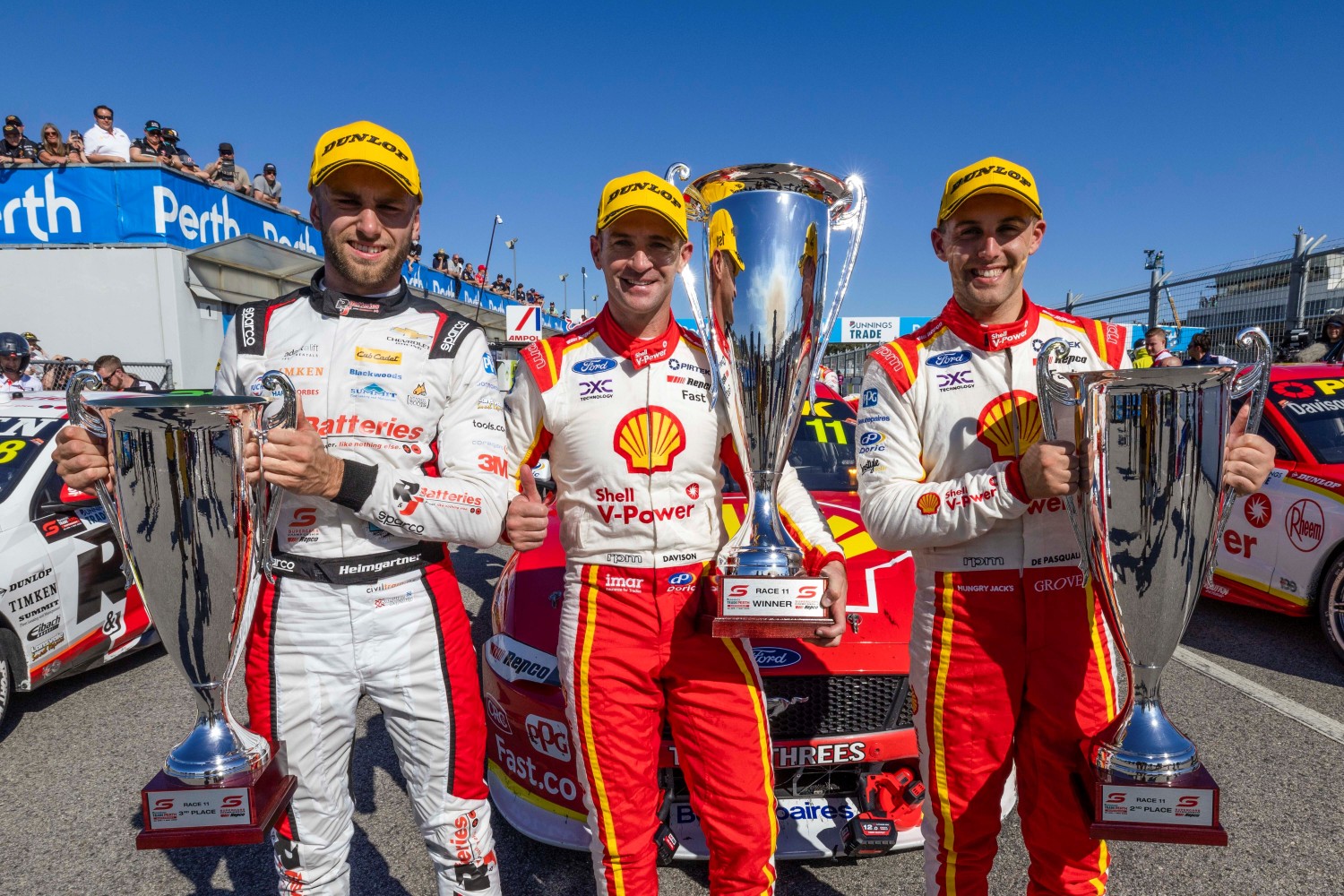 Shane van Gisbergen made it two wins from three starts in Western Australia this weekend and denied James Courtney a first win in six years after a late overtaking move in the final race of the Bunnings Trade Perth SuperNight.

Van Gisbergen overhauled Courtney with six laps remaining to score win No. 8 of 2022 and victory 62 of his career.

Courtney played himself into contention with an early pit stop, but was unable to deny the championship leader late in the race.

Courtney, the 2010 Supercars’ Champion held on for second place ahead of Will Davison who won a wild opening race of the day earlier in the afternoon.

A horror weekend for Chaz Mostert saw the defending Bathurst 1000 Champion slide from third back to fifth in Championship standings with Davison and Cam Waters moving into 3rd and 4th respectively.

“I’ve never done a burnout here before, I hope everyone liked that,” van Gisbergen said.

“What an awesome weekend, thanks to the team so much, the car’s been brilliant.

“That race was pretty funny, I didn’t realize James was the leader, I thought it was Will and I.

“I took off after James, so sorry for stealing that one from him.

“It was awesome good battle with Will and also with James.”

Courtney held onto second ahead of Davison, securing his first podium since Sydney last November.

Yellow flags flew late on after West Australian Jake Kostecki was beached at Turn 7 after contact with cousin Brodie Kostecki.

The race ended with van Gisbergen celebrating victory with a trademark burnout for the fans in the west, who filled Wanneroo Raceway for both days of this year’s event.