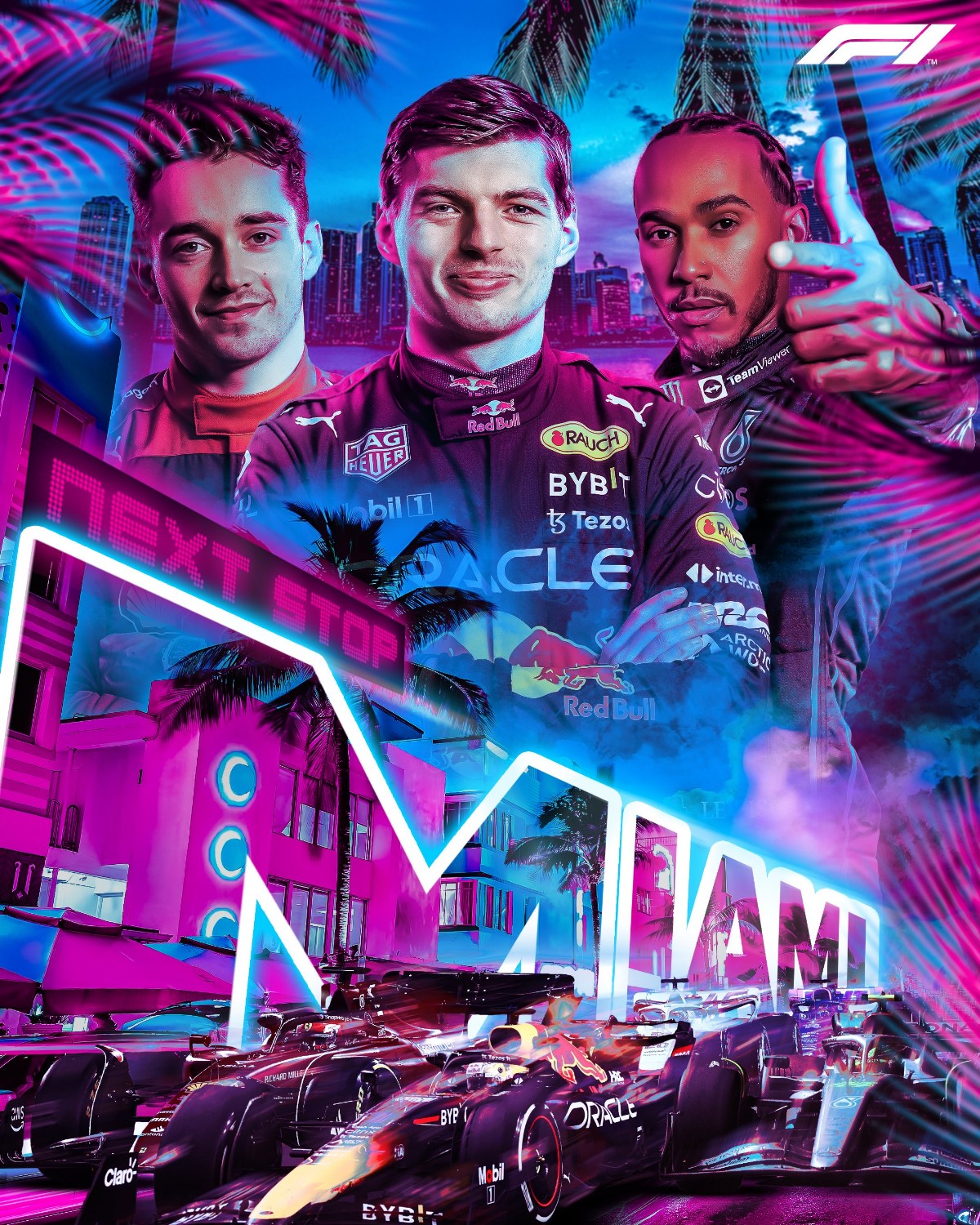 Plans to add a second grand prix in the United States have been several years in the making, with Miami, Florida, eventually pinpointed as the desirable location. After further discussions the area around the Hard Rock Stadium, in Miami Gardens, was selected.

Hard Rock Stadium is the home of NFL’s Miami Dolphins, Miami Hurricanes soccer team and tennis’ Miami Open, and has hosted the prestigious Super Bowl on six occasions, most recently in 2020.

The Miami International Autodrome can now be added to the Hard Rock Stadium’s impressive sporting portfolio, with Formula 1’s Miami Grand Prix contracted through the next decade. Miami’s round comes in addition to the annual United States Grand Prix, at Austin’s Circuit of the Americas, which will take place in October, marking the first time since 1984 that two rounds have been held in the country.

Miami International Autodrome will also become the 11th different venue to host Formula 1 in the United States, more than any other country in the world.

The 5.41km 19-turn wall-lined circuit, named the Miami International Autodrome, utilizes the land on the Hard Rock Stadium campus. The circuit has been designed in conjunction with Formula 1 officials in order to create the best fast and flowing layout, as well as offering maximum opportunities for racing, with three DRS zones located around the track.

The start/finish line and pit lane will be located adjacent to the Hard Rock Stadium, where the likes of Taylor Swift, The Rolling Stones and U2 once played, and which will now reverberate to the sound of Formula 1 machinery. Formula 1 is ready to thrive in ‘The 305’.

What Can We Expect from the Miami International Autodrome?

This weekend, Formula One heads to Miami for the first time, with the temporary Miami International Autodrome hosting Round 5 of the 2022 Formula One season.

It’s a brand-new track and challenge for F1, so what can we expect?

What’s the track like?
The 5.412 km venue is located around the Hard Rock Stadium in Miami, featuring 19 corners, 12 left-handers and seven right. The layout is interesting, because it features many low and high-speed corners, but not very many in the mid-range. There are also several long straights and three DRS zones. 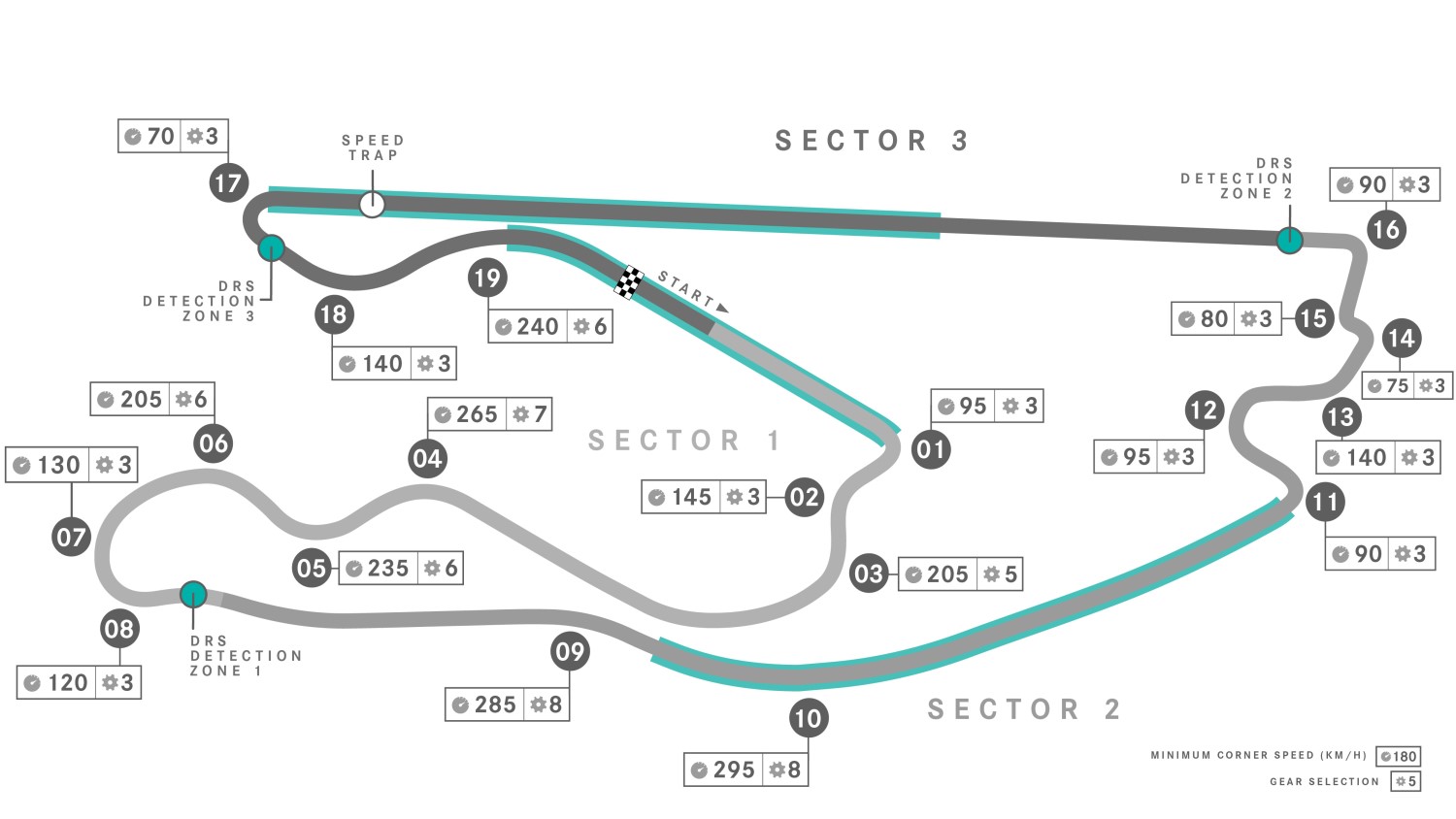 Because the slow corners are often followed by long straights, low-speed traction on corner exits will be important and a compromise is required with the car set-up. You want a high ride height with high downforce for the fast corners early on, a low drag set-up for the long straights and then a lower ride height with a high downforce level for the twisty sections. So, you must weigh up where the priorities are and what will get you the most lap time.

The sectors are all quite different. Sector one is dominated by faster, sweeping turns, while the second includes more of the slower turns. Sector three is dominated by the long back straight and the hairpin. Track evolution on the new surface is likely to be high, so lap times will be tumbling as the weekend progresses.

Surprisingly, the track’s characteristics share a few similarities with venues like Barcelona, in that the high-speed corners are early in the lap, therefore heating up the tires, and the end of the lap features twisty corners where the hot tires suffer – as there is no grip left. However, tire overheating might be a bit easier than in Barcelona, due to Miami’s long straights.

Given it is a brand-new track, we have no historical data, so it is a complete step into the unknown for all of the teams and drivers. The focus in the build-up has been on computer and driver-in-loop simulations with the limited information available to us, to try and get as close a guide as possible to what we can expect when we hit the track in Miami.

Both drivers have spent time in the simulator after the last round in Imola to get up to speed with the track layout and find a good base set-up for the first practice session. And it’ll then be important to build on that set-up as the weekend progresses, to get the car into a good working window.

Will it be a good track for racing?
The fact there are three long straights each with DRS zones and each leading into slow corners, does bode well in terms of overtaking opportunities. Turn 11 and Turn 17 will likely be the key places to watch out for.

The track is also quite narrow in some places, compared to permanent tracks. While this does make it harder to race side-by-side, it may prove important in terms of strategy and the opportunity to make places because cars and debris will be harder to clear. The likelihood of a Safety Car or Virtual Safety Car is high.

We have seen encouraging signs of drivers finding these 2022 cars easier to follow and that will be useful around a tight street track like Miami, where there are some fast and twisty corner sections leading onto straights. Hot temperatures are an important factor here too, as keeping the cars cool in traffic will be a challenge and may lead to drivers backing off to cool the brakes and Power Units.

Expectations can be very different to reality and wheel-to-wheel racing isn’t something we can simulate in our pre-race preparations, so we’ll have to wait and see how things progress over the race weekend.

What will the weather be like in Miami?
We expect conditions in Miami to be very warm, in the high 20s and even up to 30°C. And that’s just the air temperature, with track temperatures getting much hotter. It’s also anticipated to be dry, with rain rarely falling there in May. But we all know the weather can surprise us…

Interestingly, the weekend schedule means first practice takes place earlier than the race start time, practice two is later, while neither match qualifying either. So teams will have zero opportunity to test the tires and the car in the same track conditions as we’ll have for qualifying and the race.

The final section of FP1 will be the closest we get to race conditions and will therefore be unusually important, in order to collect useful data.

A new circuit always a presents an exciting challenge to the drivers and engineers. Although the drivers will learn the circuit very quickly, the behavior of the tires, the initial aging of the asphalt and the local conditions will ensure that there is a lot for the engineers to optimize throughout the weekend.

The Miami International Autodrome is a new circuit, which features several long straights, two fast corner sequences and one low-speed twisty section. This is all within a 5.4km anti-clockwise layout. There will be compromises to be made between the various sections of the track and so the team will have quite a task to find the best overall lap time. 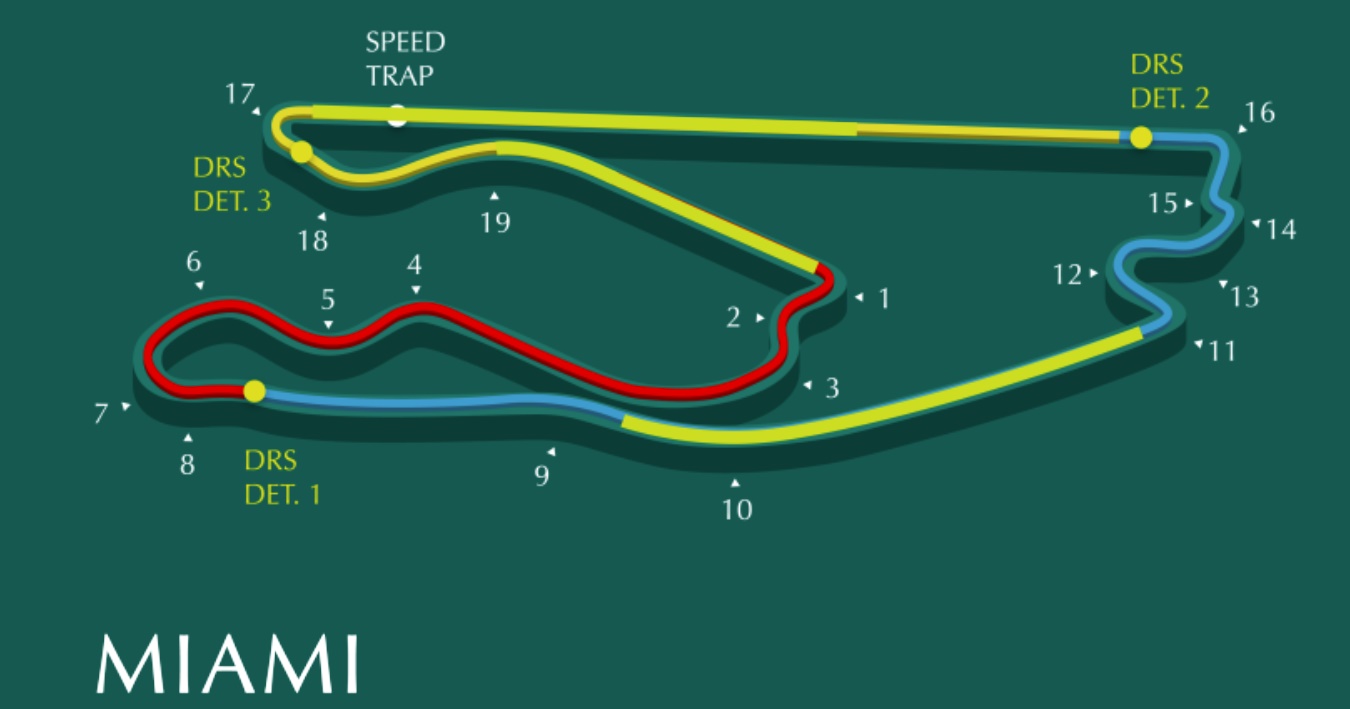 Pirelli have provided compounds from the middle of their range, which is the same as in Imola. These are expected to suit the circuit layout quite well, although the exact tire behavior will depend on the track temperature and the chosen setup. It is this interaction between setup and tire behavior that will provide the drivers and engineers the biggest challenge of the weekend.

The weather looks likely to be hot and sunny with a small chance of thundery showers, and with the key sessions taking place in the mid to late afternoon, it could be quite punishing for the cars, tires and drivers. 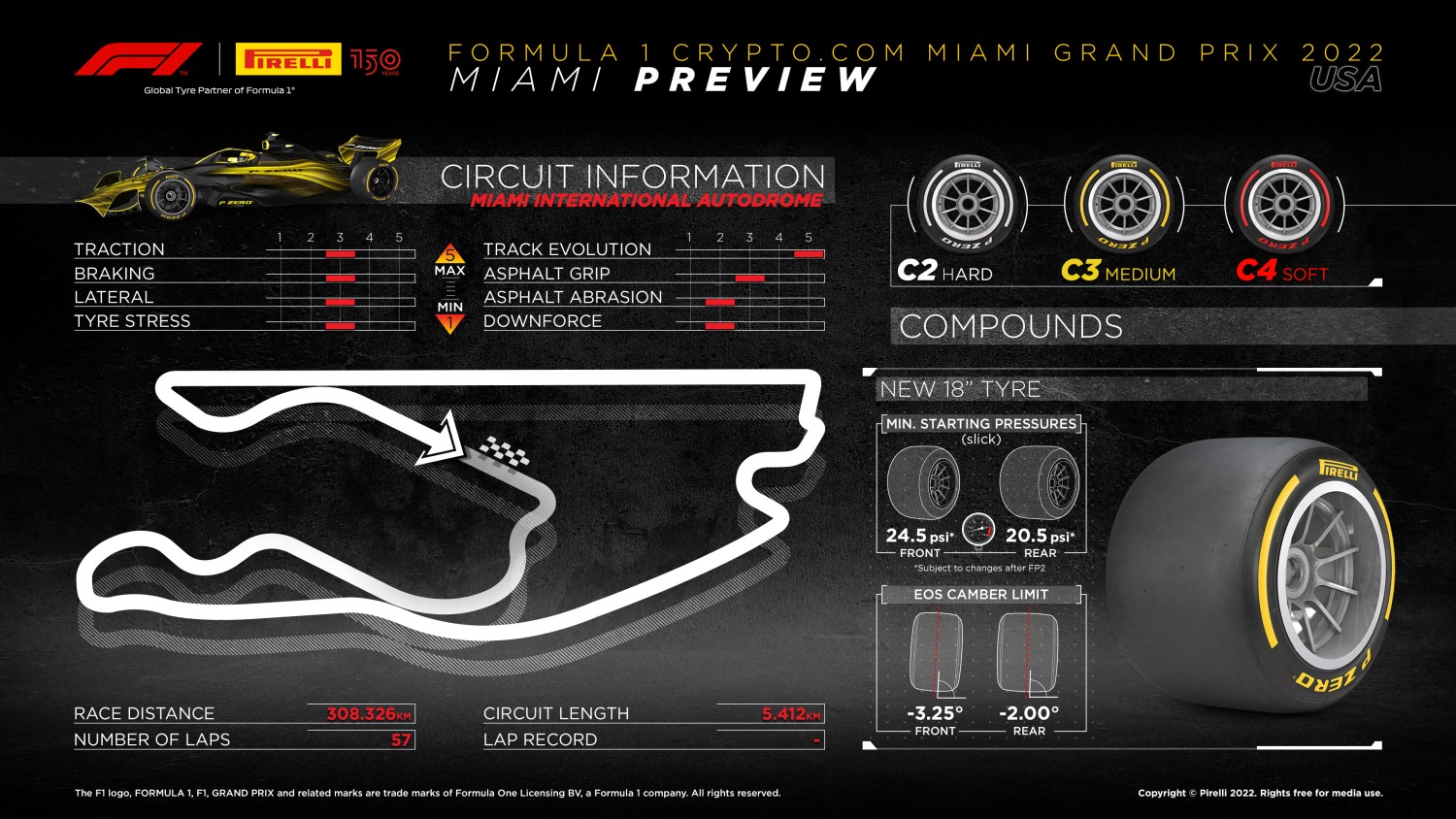 “There’s been a huge buzz of excitement around the first Miami Grand Prix, where the track has some similarities to Jeddah, although there are some parts that are slower and more technical than Saudi Arabia: especially the section from Turns 11 to 16. The rest is a very quick layout, running anti-clockwise, which puts the emphasis on the tires on the right hand side of the car. We’re expecting the usual rapid track evolution and a smooth surface with the new asphalt, but the track has been jet-washed at high pressure, which means that it should offer quite good grip from the beginning. Because it’s a fast track the cars are likely to run a low to medium downforce set-up, which could lead to a bit of sliding in the high-speed corners on the hard compounds in particular. For any new track our choice tends to be on the conservative side, so it will be interest to confront the simulations with real data.”