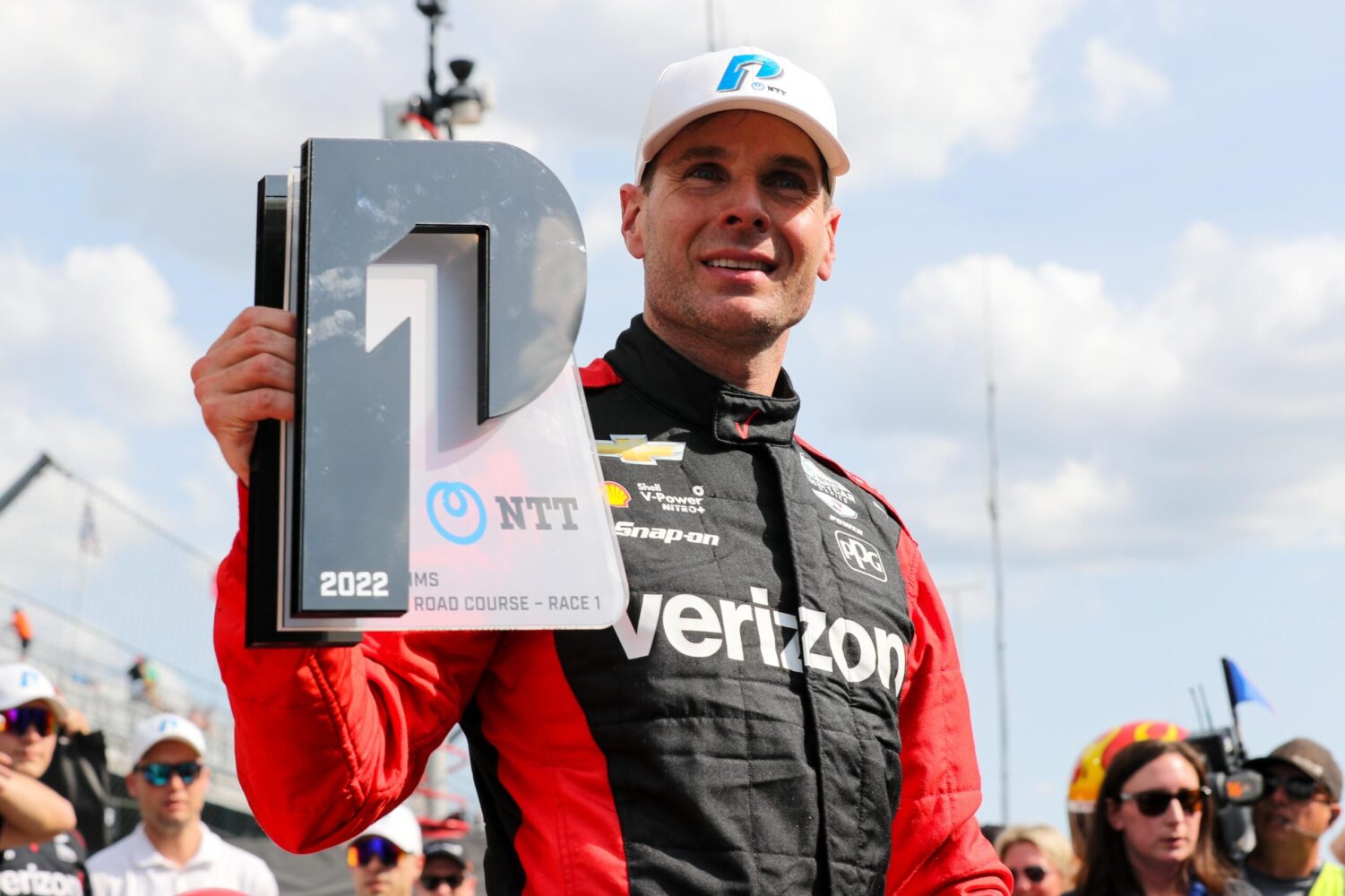 Will Power has won the pole position for the GMR Grand Prix NTT IndyCar Series race on the IMS road course with a lap time of 1:09.7664 as Chevy powered car continued their domination of the 2022 season.

“This series, it’s so tight,” Power said. “So, to get a pole these days, you know you’ve done a really good job. And the team has done a great job. I’m super-stoked. It’s been a long time since we’ve had a pole on a road course. I worked hard on that one.

“I feel so privileged to be so close to him (Andretti). To be up there with names like Mario Andretti and A.J. Foyt is something I wouldn’t have imagined when I started my career.”

This was Power’s first road or street course pole since the 2020 season finale at St. Petersburg, Florida, and he became the fifth different pole winner in five NTT INDYCAR SERIES races this season.

Power has dominated at this track over the years and beat Alex Palou’s Ganassi Honda by 0.04s, the only Honda within a whiff of the front

6 of the top-7 qualifiers were Chevy powered as Chevy continues to eat Honda’s lunch this year.

Power’s Penske  teammate Josef Newgarden will start 3rd in the #2 Chevy while Conor Daly had his best qualifying of the season in 4th in his ECR Chevy.

Winner at Barber, Pato O’Ward was 5th while his Arrow McLaren teammate Felix Rosenqvist rounded out the top-6.

Callum Ilott continued his impressive season with the one-car Juncos Hollinger Racing, qualifying seventh in the team’s No. 77 Chevrolet as the top rookie in the field.

WILL POWER, NO. 12 VERIZON 5G CHEVROLET, TEAM PENSKE – POLE WINNER: “That is the fun of this series. It’s so tight. When you get a pole these days, you know you’ve done a really good job. The team has done a great job. I’m super stoked. It’s been a long time since I’ve had a pole on a road course. Yeah man, I worked hard for that one!”

YOU’RE THREE SHORT OF MARIO ANDRETTI’S RECORD OF CAREER POLES: “I feel so privileged to get so close to him. I never thought I’d get there. Yes, three away… he’s an absolute legend of the sport. It would be such an honor to match or surpass him. To be up there with names like Mario Andretti and A.J. Foyt is something I wouldn’t have imagined when I started my career.”

JOSEF NEWGARDEN, NO. 2 PPG CHEVROLET, TEAM PENSKE – QUALIFIED THIRD: “It was a good day here at the GP of Indy and qualifying day at IMS. We qualified P3 and our teammate Will Power is on the pole, which is fantastic. I feel a little bad because I felt like our car was capable of winning the pole. We missed it by literally half-a-tenth so I’ll put that on me. I didn’t get everything out of the car. It was really capable and everyone did a great job. The strategy was right. Now we can focus on tomorrow. We’ve got two cars in the top-three. We’ll see if we can race from there with PPG and Team Chevy.”

CONOR DALY, NO. 20 BITNILE CHEVROLET, ED CARPENTER RACING – QUALIFIED FOURTH: “In the previous run, we had just given up a little bit out of Turn 13 and we finally nailed it. We were up on our best lap. The tires are going off pretty quick here so you have to nail it on that first lap. We tried to get a little too much from it. You’re fighting for a tenth-of-a-second around here. Being two-tenths off Will Power for a pole position at Indianapolis, he’s one of the best to do it here. It feels great. This team has done a lot of work and I don’t think they’ve gotten the credit they deserve so far this year. We’ve not had a great start to the season but there’s a lot that hasn’t been their fault or our fault at all as a group. This is where we want to be moving forward and it’s a great way to start May, for sure.”

PATO O’WARD, NO. 5 McLAREN VUSE CHEVROLET, ARROW McLAREN RACING SP – QUALIFIED FIFTH: “We had a very good day today. We didn’t quite get it done in the Firestone Fast Six. We were as quick as anybody on fresh reds but we missed it a little bit on used reds. I think we could have been a bit faster but in the end, we didn’t have enough for pole. I’m happy that we are starting toward the front, that’s important in IndyCar. I’m also happy to have Felix up there with me. We are going to look to have a good race tomorrow.”

FELIX ROSENQVIST, NO. 7 McLAREN VUSE CHEVROLET, ARROW McLAREN RACING SP – QUALIFIED SIXTH: “It’s a good qualifying streak for the No. 7 Vuse Arrow McLaren SP Chevrolet. It’s always frustrating when your last lap isn’t good, I screwed it up in the last corner. It felt like we were really good on the new tires but we took a lot of life out of them. I think we had a little bit more today but it was another solid qualifying, which is what we need. It will be fun.”

CALLUM ILOTT, NO. 77 DYNAMIC EDGE CHEVROLET, JUNCOS HOLLINGER RACING – STARTING SEVENTH: “I knew it was going to be close, so it’s a bit of a shame but overall that was a much more rewarding run. I tried everything. We made a mega effort. I just drive at the end of the day, and that’s what I’m paid to do. Where we’ve come from, it’s more about putting it together and building the team together. It’s the small differences in getting it right. We’ve got a good road-course guys. These guys put together a mega effort to make it happen but there’s still a lot more to come. I think we’ve only just started the development. Hopefully we can do a bit more later on.”

FIRST TEST WITH THE TEAM AT INDY LAST YEAR AND RUNNING A SPORTS CAR RACE IN THE FALL: “You can get an idea about how to race around here in a GT car, although it’s massively different. That was a long race and this one will be more of a sprint. We’ve got a lot to learn. The race pace is something we need to improve quite a bit. The first stint at Barber was really good, so we’ll see here.”

SCOTT McLAUGHLIN, NO. 3 SNAP-ON CHEVROLET, TEAM PENSKE – QUALIFIED 11TH: “The Snap-On Chevy felt awesome. I just made one mistake on that first lap on red tires. That’s key and that’s everything. We did two laps there and the second lap wasn’t fast enough. It’s so tight that you can’t afford to let go of that. It’s unfortunate for Snap-On and Team Chevy but I think we have a fast car. It might rain tomorrow so we’ll see. You’re always trying to get every inch but you get punished more if you miss it. That’s the beauty of IndyCar racing. It’s so competitive I’m upset but I also know we have a fast car. It’s just a matter of putting it together. Unfortunately this time we didn’t but we’ll keep pressing on and be proud of where we’re at.”

RINUS VEEKAY, NO. 21 BUILDING TOMORROW CHEVROLET, ED CARPENTER RACING – QUALIFIEID 15TH: “I honestly don’t know. We were fastest on the blacks by a mile in qualifying here, right now. We went to reds and I was honestly pretty happy with the car and pretty happy with my lap. I’m very confused about being eighth right now. We’ll have to look into it. I don’t know what we did wrong. There are a few little tweaks that could have been better. I have no words for it. We should have at least passed through. There are some things we have to improve for tomorrow. I don’t know what went wrong here.”

JUAN PABLO MONTOYA, NO. 6 ARROW McLAREN SP CHEVROLET, ARROW McLAREN RACING SP – QUALIFIED 23RD: “It’s hard because we didn’t do any testing. I’ve been out of this car for a year. I’ve been racing different things but everything I’ve driving the last five years has had traction control. So you get the snaps but you know the traction control is going to catch you. Here you get the snap and nothing is going to catch it. I’m a little behind the car there, but we are making steps. The car drives a lot better than last year. Everyone with the Lucas Oil car has done a great job. I screwed up my lap on reds. I could have done a better job but it’s hard. I got one lap in practice and one lap in qualifying, and that’s all the red running before the race. We’ll have 85 laps tomorrow and we’re probably going to do 70 laps on reds.”

KYLE KIRKWOOD, NO. 14 ROKIT CHEVROLET, AJ FOYT RACING – QUALIFIED 22ND: “Not our best qualifying. We were just outside the top-20 and starting alongside Scott Dixon. The car actually felt really good. I thought we had the time in it. We were a lot better on blacks than we were on reds, and I’m not sure why that is. We’re going to go to the drawing board to figure that out. There is some weather on the way for tomorrow and we’re hoping that will shake things up. We have a great group of guys here and we’ll work to get this car back toward the pointy end of the field.”

TATIANA CALDERON, NO. 11 ROKIT CHEVROLET, AJ FOYT RACING – QUALIFIED 25TH: “It was a busy day today. We had a little issue in Free Practice One so I missed a little bit of running, but we managed to make some good steps in Free Practice Two. In qualifying, I think we are closer to the pace. Hopefully we have some good weather tomorrow and we can fight for some positions. I’m starting just behind Juan Pablo Montoya, so that’s going to be quite a good race.”

DALTON KELLETT, NO. 4 K-LINE INSULATORS CHEVROLET, AJ FOYT RACING – QUALIFIED 26TH: “A bit of a tough qualifying session for the team overall. We’re not starting where we want to but we’ve made some improvements in the cars. This has historically been somewhere where we have struggled. There are some things we can learn tomorrow and figure out. We have a warmup tomorrow to work on the car and go from there. That’s the gameplan. Last year was a bit of a red (tire) race with three stops so we’ll be working on some mileage to see what we have for race pace.”