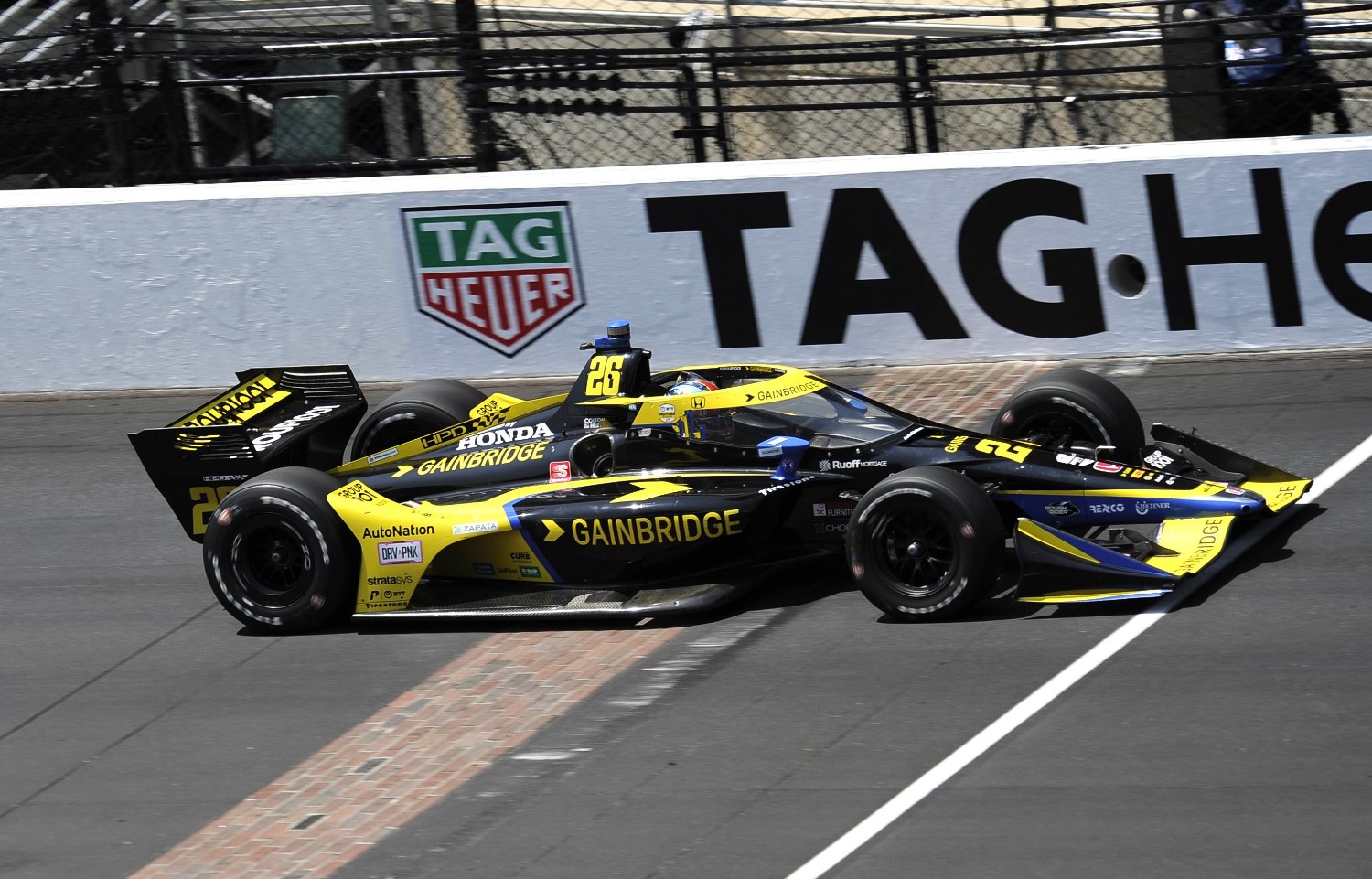 Andretti Autosport driver Colton Herta showed why he belongs in F1 by schooling all the other IndyCar drivers in dry, partially wet and full wet conditions to win the rain shortened GMR Grand Prix at IMS, his seventh career INDYCAR victory, and first of the 2022 season.

Leading 50 of 75 laps, Herta beat fellow Honda driver Simon Pagenaud by 3.098s and polesitter Will Power by 4.056s in a race that hit the 2-hour time limit and was shortened by 10 laps.

Marcus Ericsson and Conor Daly rounded out the top-5.

“I’ve never been in a race like that in my life,” Daly said. “That was the craziest thing I’ve ever experienced.”

It did not matter if it was raining hard, partially wet or dry, Herta had the bit between his teeth and even made an unbelievable 4-wheel slide in the wet on dry tires.

While the wankers lost control of their cars left and right, Herta was in his own class all race long, taking the lead from deep in the field early and losing it primarily only during pitstops.

“This is the hardest race I think I’ve ever done,” Herta said. “Wet to dry, dry back to wet. Thank you so much for the Hoosiers for sticking around. I know you’re used to this weather, so thank you very much. Love you guys.”

Rain sprinkles caused the race start to be declared wet, with all drivers on Firestone grooved tires. But it took Herta and Takuma Sato only two laps to realize there was enough traction to switch to the slick, grippy Firestone alternate “red” tires. The rest of the field quickly followed suit, with all 27 drivers changing to alternate slicks by Lap 5.

For the next 30 laps, this appeared to be a highly competitive but conventional NTT INDYCAR SERIES road course race, with three incidents triggering caution periods and mixing up the running order. But the strategic mind games began when Dalton Kellett spun off course in Turn 6 on Lap 36 in the No. 4 K-LINE/AJ FOYT RACING Chevrolet.

Leaden, threatening clouds approached IMS from the west, with the airwaves between pit boxes and drivers crackling with strategic chatter.

Rookie Devlin DeFrancesco, Alexander Rossi and reigning series champion Alex Palou decided to pit for Firestone rain tires during that caution as light rain began to fall to varying degrees in different locations of the massive facility, with a handful of others following suit to switch to rain tires during another caution that started on Lap 42.

This dice roll came up snake eyes because the rain began to let up on Lap 45, when Herta passed Ericsson for the lead in Turn 4.

By Lap 52, the rain began to fall again at varying levels around the track, creating more head games for teams and drivers. During a caution period on Lap 60 with intermittent rain falling, all the contending cars came to the pits for Firestone alternate slick tires.

Two laps later, those plans became a soggy mess when hard rain began to fall. All the contenders tiptoed back to the pits for Firestone rain tires except for Pato O’Ward, Scott McLaughlin and Romain Grosjean, who stayed out on alternate slicks.

The race restarted at the end of Lap 66, and Herta – on rain tires – easily devoured the slick-shod O’Ward to take the lead for good with an inside pass into Turn 1 after the field took the green.

Later that lap, the daring strategy of staying on slicks unraveled for McLaughlin. Struggling for grip, he spun in his No. 3 Snap-on Tools Chevrolet. O’Ward also spun out of second place on Lap 69 in his No. 5 Arrow McLaren SP.

Herta gradually pulled away from Pagenaud over the closing laps, as teams kept their eyes on the race clock and the skies. Herta led Pagenaud by 3.8256 seconds on Lap 72, and the race effectively ended when Juan Pablo Montoya went off course after making contact with the wall in his No. 6 Arrow McLaren SP Chevrolet.

“It was treacherous at the end,” Pagenaud said. “You’ve got to say congrats to Colton because it was really tough to finish the race. We made the right calls on the tires. It was tricky. It was really tricky to decide.”

Colton Herta (#26 Andretti Autosport Honda) Finished 1st: “This is awesome! That was the hardest race I think I’ve ever done.  [The early change to dry weather ‘slick’ tires] sure helped us a lot, we gained a lot of positions there.  And the other [strategy] calls came at just the right time, too.  Wet-to-dry; back to wet, incredible.  And thank you to all the fans for sticking around in this kind of weather.  Love you guys.”

Simon Pagenaud (#60 Meyer Shank Racing Honda) Finished 2nd: “Visibility was a real problem at the end, it was really difficult to drive at the end. It was really unfortunate, as the car was really good to drive, but it was so hard to see. I was looking at the [signaling] lights on the side [of the track] to find my braking points at the end.  It was really tough to even finish the race. Congrats to [winner] Colton [Herta], and it was an amazing job from everyone at Meyer Shank Racing.  We made the right calls on the tires, even though it was tricky, really tricky to decide.  But overall, a great day for us, a really good job.”