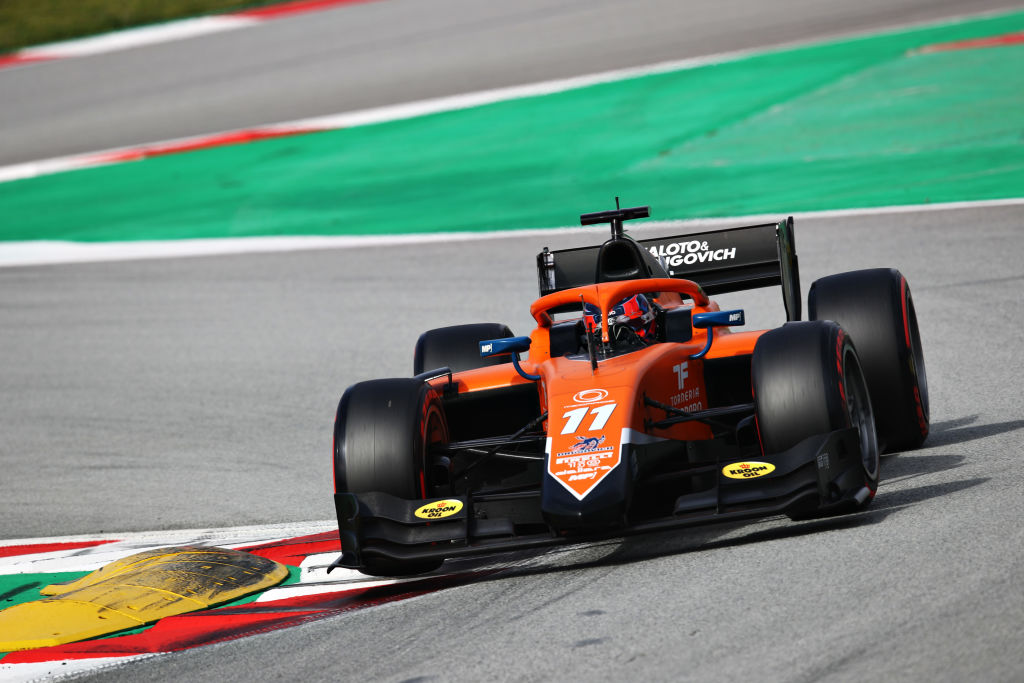 Felipe Drugovich led the way in Formula 2 Free Practice after multiple red flag stoppages curtailed running ahead of Qualifying. The MP Motorsport driver was almost a full half-second clear of the pack, with Jehan Daruvala and Logan Sargeant his closest challengers 0.4 and 0.5s behind him.

Olli Caldwell and Marcus Armstrong both brought out red flags during the session, with the Campos Racing driver hitting the wall at Turn 9. Meanwhile, Armstrong became beached in the gravel at Turn 4 as drivers struggled for grip under the midday sun.

Championship leader Théo Pourchaire was out first for an immediate installation lap but there was no rush to get out on track for anyone. The Van Amersfoort Racing duo of Jake Hughes and Amaury Cordeel set the initial times to beat with the latter’s 1:32.609 the fastest time of the early lappers.

Just as the circuit began to fill up, a red flag was thrown for Olli Caldwell, who hit the barriers on the exit of Turn 9 on his first flying lap. The Campos driver was able to get out of the car himself after losing the rear end mid-corner and nosing into the barriers.

fter the brief stoppage, the session resumed with 26 minutes remaining and a long train of cars led by Frederik Vesti returned to the circuit. Marcus Armstrong was one of the first drivers to get onto a push lap, but he brought out the red flags for the second time in Free Practice.

The Hitech Grand Prix driver dropped the rear of his car at Turn 4 and spun into the gravel after setting the fastest first sector time of the session. Agonizingly for the Briton, he couldn’t get back onto track and his car had to be recovered by the marshals.

The session was back to green flag conditions with just over 16 minutes remaining and there was a rush to get out to make up for the lost time. The timing screens lit up immediately with purple sector times, but it was Dennis Hauger who topped the times after the first flying laps with a 1:31.707.

Felipe Drugovich had gone well during in-season testing at the Circuit de Barcelona-Catalunya earlier this year and the Brazilian carried on from where he’d left off, going eight-tenths faster than Hauger on his first lap.

Another wide moment at Turn 4 brought out some brief yellow flags courtesy of Daruvala. He was able to keep his momentum going to escape the gravel trap and continue his session. He made amends quickly, going second-fastest on his next lap and ahead of his PREMA Racing teammate.

Logan Sargeant, Jack Doohan, Jüri Vips and Ayumu Iwasa each were able to improve their times to bump Hauger down the order to ninth. Liam Lawson was able to make his way up the order, with consecutive laps taking him sixth and then fifth by the checkered flag. Pourchaire ended the session eighth fastest with Trident’s Calan Williams rounding out the top 10.