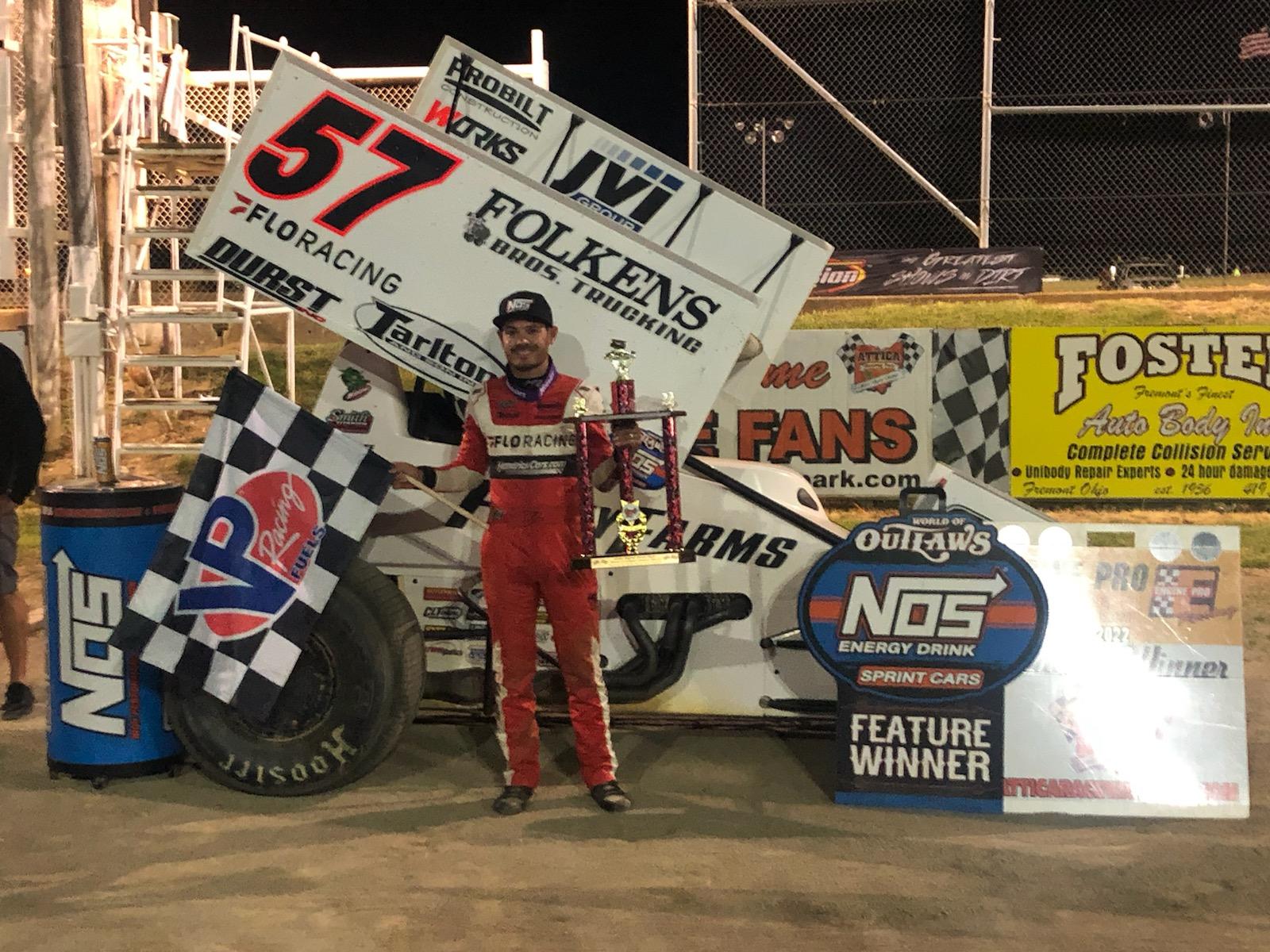 After losing close ones at Bristol and Bridgeport, Kyle Larson was bound and determined to return to World of Outlaws NOS Energy Drink Sprint Car Series victory lane, and he did just that on Friday night.

The Elk Grove, CA native laid down arguably the most dominating performance of the 2022 season, never once relinquishing control of the lead through 40 laps at Ohio’s Attica Raceway Park. Larson was forced to survive five restarts, but handled each situation better than the last and fended off every challenge Carson Macedo could throw his way.

Yung Money’s wing dance was an inevitable one of sorts. Since his first Series win of the year at Tulare (CA) Thunderbowl in March, the reigning NASCAR Cup Series champion had settled for a pair of tough-to-swallow second-place finishes. There was Bristol (TN) Motor Speedway when he lost out on $25,000 by mere inches to Spencer Bayston, and then Bridgeport (NJ) Motorsports Park when he faltered on a late-race restart to Sheldon Haudenschild.

On this night, though, there was no doubting the multi-faceted superstar. His wire-to-wire victory makes him the seventh multi-time winner of 2022 and brings him to 26 career wins with The Greatest Show on Dirt in only 118 starts at 29-years-old.

“I definitely let one slip away the other night, so it feels great to rebound like this,” Larson admitted. “The Outlaws are always tough to beat, we still had to earn that one. Paul Silva has had this #57 on point every single time I’ve been in this year, and it’s a lot of fun to drive. It’s awesome to get a win in front of a packed crowd like this at Attica. These Ohio fans are amazing and I love racing in front of them.”

The win marked Larson’s fourth career triumph at the Attica Raceway Park 1/3-mile and his first since he topped the 2020 Brad Doty Classic. He’s expected to return to the BDC on Tuesday, July 12 for a chance at the season sweep with $15,000 on the line.

Larson’s biggest challenger throughout the 40-lap affair was Carson Macedo, who previously drove for his now-defunct Kyle Larson Racing #2 team. The Lemoore, CA native lined up on the inside and outside of Larson’s #57 on restarts, offering several sliders to his former boss but never quite had the speed to clear him.

“I knew Carson was really good tonight and I could see him below me on the restarts into [turn] one,” Larson thought. “He’s obviously an aggressive driver and great at these restarts, so I was a bit nervous at times. I felt like as long as I could get a good launch then I preferred that over traffic and dealing with the dust. It was just that one lap on restarts that I knew mattered most.”

Macedo ultimately finished 1.415-seconds behind Larson and re-claimed the runner-up spot in the current championship standings. His seventh podium is arguably the most meaningful of the season for the Jason Johnson Racing, Albaugh #41.

It was up to the 25-year-old Macedo and young gun crew guys Clyde Knipp and Nate Repetz to control things with crew chief Philip Dietz and co-owner Brooke Dietz at home with their newborn baby, Jase.

“My guys did an incredible job tonight,” Macedo praised. “Clyde and Nate stepped up huge with Phil taking care of Brooke and their little boy, Jase. He was watching DIRTVision and we were talking about things on the phone. It was an interesting dynamic, but it worked tonight. The restarts were tough and Kyle is so good at them. He times each of them differently, so you can never exactly nail down what he’s doing. I could stay with him for a lap or two, but then I would just lose momentum and slide back.”

Rounding out the podium was James McFadden with his first top-three finish in more than two months aboard the Roth Motorsports #83. It was a rollercoaster ride for the Alice Springs, NT, Australia native in the 40-lapper.

“It felt like we went from ninth to fifth down to eighth up to sixth, and then third,” McFadden joked. “It’s been a rough couple of weeks, so it’s good to get back on the podium in this Roth car. The cautions kind of hurt us, but near the end they helped us too. Justin [Adams], Rob [Beattie], and Gary [Woodman] have been working hard. We need to get a win for Dennis and Teresa, I can’t thank them enough for the opportunity.”