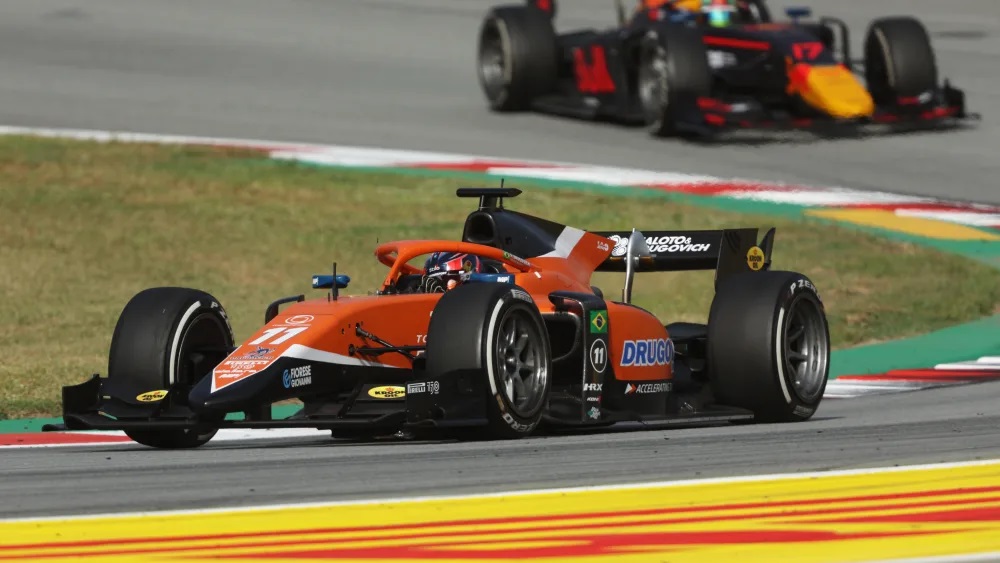 Felipe Drugovich made up for the post-Qualifying penalty by winning the Barcelona Sprint Race at a canter. Demoted to fourth on the grid by a penalty, he seized the lead at Turn 1 and never looked back.

The MP Motorsport driver led every lap from that point and victory moved him to the top of the Formula 2 Drivers’ Championship. Ayumu Iwasa and Logan Sargeant were able to secure their maiden F2 podiums, finishing second and third respectively.

They were followed by Jehan Daruvala, who finished where he started and Théo Pourchaire, who conceded the lead of the Championship to the race winner. Feature Race pole-sitter Jack Doohan claimed sixth, Frederick Vesti followed in seventh with Enzo Fittipaldi, Liam Lawson and Marcus Armstrong completing the top 10.

Calan Williams had gained pole after Drugovich’s penalty but stalled on the formation lap. As the rest of the field got going, he was consigned to a pit lane start.

Defacto pole man Jake Hughes was swamped into Turn 1 with Drugovich claiming the high ground and race lead. Iwasa got a great start and was up to second having started fifth on the grid, and Sargeant was able to rise from sixth to third in the opening corners.

Daruvala was also on the go, putting a great move on Pourchaire around the outside of Turn 10 to take fifth from the Championship leader. Jüri Vips compounded the Frenchman’s woes, claiming sixth position into Turn 1 to open lap 2.

Nobody in the top 10 had escaped the DRS zone of the driver behind as it was enabled. Sargeant was flying and having set the fastest lap across the line on lap 4 shaped for a move down the inside of Iwasa. Some canny defensive driving from the DAMS driver forced the American to back out of the move, squeezing him to the apex of the first corner.

Vips wasn’t as shy but after almost making a similar move on Daruvala with a dive at Turn 1, spun off moments later at Turn 4 in his pursuit. Beached in the gravel, the incident brought out the Safety Car on lap 7.

Drugovich takes the lead at the start

Amaury Cordeel was assigned a 10-second stop/go penalty for being out of position at Safety Car line one after it had been deployed.

Racing got back underway on lap 9 with Drugovich going early ahead of the final chicane to leave Iwasa and the rest trailing.

Olli Caldwell made a move on Cem Bölükbasi to take 15th position on lap 14 with DRS assistance. The order shifted up ahead too with Clément Novalak diving by Richard Verschoor’s Trident into Turn 1 a lap later.

Williams was up to 17th on his comeback drive but couldn’t find a way past the Turkish driver. A move to force the Charouz Racing System man defensive almost opened the door for an unorthodox move. Up the inside of Turn 3, the Trident driver couldn’t quite find a route through as Bölükbasi resisted the move. With DRS on the main straight on lap 18 though, Williams finally got the move done to gain 16th.

Daruvala had been cooped up behind Hughes’ Van Amersfoort Racing but finally nailed a DRS pass on lap 20 to move up to fourth place. Pourchaire repeated the move one lap later to clear the British driver. Doohan was next up, Hughes being passed into Turn 1 for the third lap running. Lap 23 and Vesti was through for seventh.

Fittipaldi wasn’t hanging around though, making an ambitious move around Turn 10 stick on the VAR man before Lawson and Marcus Armstrong, both made it past Hughes on the main straight in one go. Novalak added to Hughes’ misery at Turn 4 to demote him again before VAR peeled into the pits, ultimately retiring from the race.

One lap later Novalak was the one dropping down the order, running wide at Turn 9 but managing to avoid the barriers to rejoin down in 14th.

Out in front Drugovich was unchallenged and the order remained as it was after the Safety Car was withdrawn. Iwasa and Sargeant rounded out the rostrum, with both rookies claiming their maiden podiums in the second tier.

“I think we deserved this after yesterday. It’s a shame about Qualifying because we had everything to go for pole, but anyway. We moved on and got the best out of it today. So I’m really happy and hopefully tomorrow we can do as well.”