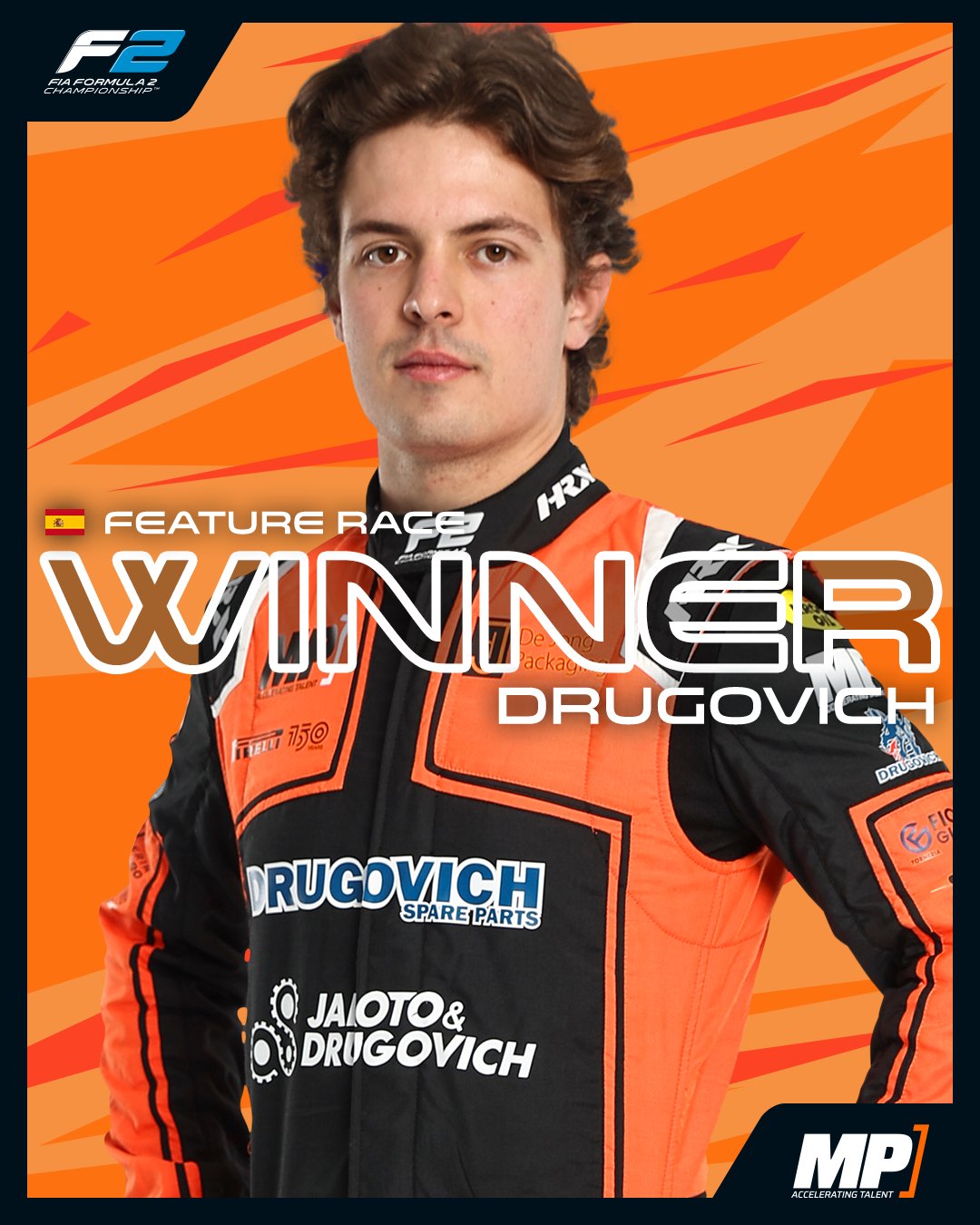 Felipe Drugovich made it two wins from two in Barcelona, winning the Feature Race after his Sprint Race success on Saturday. The MP Motorsport driver made it look simple from 10th on the grid, extending his first stint on soft tires longer than anyone else before catching and passing Jack Doohan for the win on track.

The Virtuosi Racing driver did everything right, but his early stop left him on tires five laps older than the Brazilian’s. His first podium of the 2022 F2 season will offer some comfort heading into Monaco. Frederik Vesti made his best F2 qualifying result count and the ART Grand Prix driver completed the podium in third.

Logan Sargeant was able to just about hold onto fourth from Clément Novalak, who made the alternative strategy work brilliantly for P5. Enzo Fittipaldi and Marcus Armstrong were the others that followed him with the late mandatory stop, while Théo Pourchaire, Liam Lawson and Roy Nissany rounded out the top 10.

Doohan got a good launch from pole and Vesti made great use of the clean side of the grid to jump Jüri Vips for P2. Pourchaire struggled to get his soft tires working and lost position to Drugovich on the opening lap.

Jehan Daruvala was the lead driver on the hard compound tires but was forced to defend hard from Ayumu Iwasa. That defense ended on lap 3 when the Indian driver came to a halt on the circuit, and Iwasa couldn’t avoid him in time and clipped his front wing. He was in at the end of the lap for a new nosecone as the Safety Car was deployed to recover Daruvala’s stranded PREMA Racing car.

Racing resumed on lap 7 and Doohan was able to keep Vesti at bay. Vips was in at the end of the lap for his mandatory stop and switch to the hard compound tires. His stop wasn’t the quickest and he lost position to Jake Hughes.

Vesti was called in on lap 11 and his stop ran smoothly, keeping him ahead of Sargeant in theoretical P2. Doohan remained out on track until lap 12 when he was in to cover off his closest rivals who had already stopped, but MP Motorsport opted to keep Drugovich on track to extend his first stint. Vips’ struggles continued as Calan Williams relegated the Hitech Grand Prix driver down to 15th at Turn 1 on lap 16.

The moment to pit arrived on lap 18 for Drugovich, who had managed to extend the stint on softs longer than anyone else in the field. The gap to Doohan was 29.6s as he pitted, and he rejoined in 9th position, de-facto third on the conventional strategy behind Doohan and Vesti.

Fittipaldi led the way on the alternative strategy, just over a second clear of Novalak in first and second respectively on the road after Drugovich’s stop.

Entering lap 20, Drugovich got a double tow on both and moved himself up to seventh place. The gap to Doohan at the line on lap 21 was 2.6s, albeit with Caldwell in between them.

Novalak had passed Fittipaldi by the time the duo pitted for their mandatory stop on lap 24. Marcus Armstrong was the sole-remaining car on the other strategy yet to pit, and Doohan put him between himself and Drugovich in quick order on the main straight.

Armstrong was passed by the Brazilian at Turn 10 while Novalak and Fittipaldi were 13th and 15th on re-joining the circuit but making progress towards the top 10.

Lap 26 and Drugovich had made it into DRS range of the race leader. The fresh tires gave him plenty of grip against his rival and with a great run through the final chicane, he breezed by Doohan for the race lead into Turn 1.

Novalak was clearing the traffic and eighth by lap 32 and followed by Fittipaldi and Armstrong, both on the same contra-strategy. P8 became P7 for the Frenchman on lap 33 as he slip streamed his way by Williams with DRS.

One lap later and Novalak launched a late dive on Lawson for sixth. With much better tires, he sliced up the inside of the Carlin driver at Turn 4 to take the place. Lap 35 and Novalak passed Pourchaire, while Fittipaldi cleared Lawson and Armstrong moved by Williams in synchronized moves by those on the alternate strategy.

The moves were repeated by Fittipaldi and Armstrong on Pourchaire and Lawson to move up to sixth and eighth, and the Hitech driver cleared the ART man on the same lap to take seventh.

Out in front though, Drugovich was in cruise control, extending the gap to Doohan and leaving the rest well behind. He extended his Championship advantage with the win but an investigation into whether his pit stop procedure was fully compliant with the regulations hangs over his victory. KEY QUOTE – Felipe Drugovich, MP Motorsport “An amazing, amazing weekend here. I’m really thankful to the team especially, they did an amazing job. The problem we had in Qualifying, to come back and win both races is just something I could not imagine. I’m really happy.”

Drugovich’s dominance in Barcelona has helped him into a 26-point lead in the F2 Drivers’ Championship. Pourchaire remains second on 60 points with Daruvala narrowly ahead of Lawson and Armstrong, who moves himself up into the top five. MP Motorsport made the tires work for them and extended their points tally at the top of the Teams’ Standings to 108 points. It was a double score for ART who remained second with 85, while Carlin sit in third with 73 points.