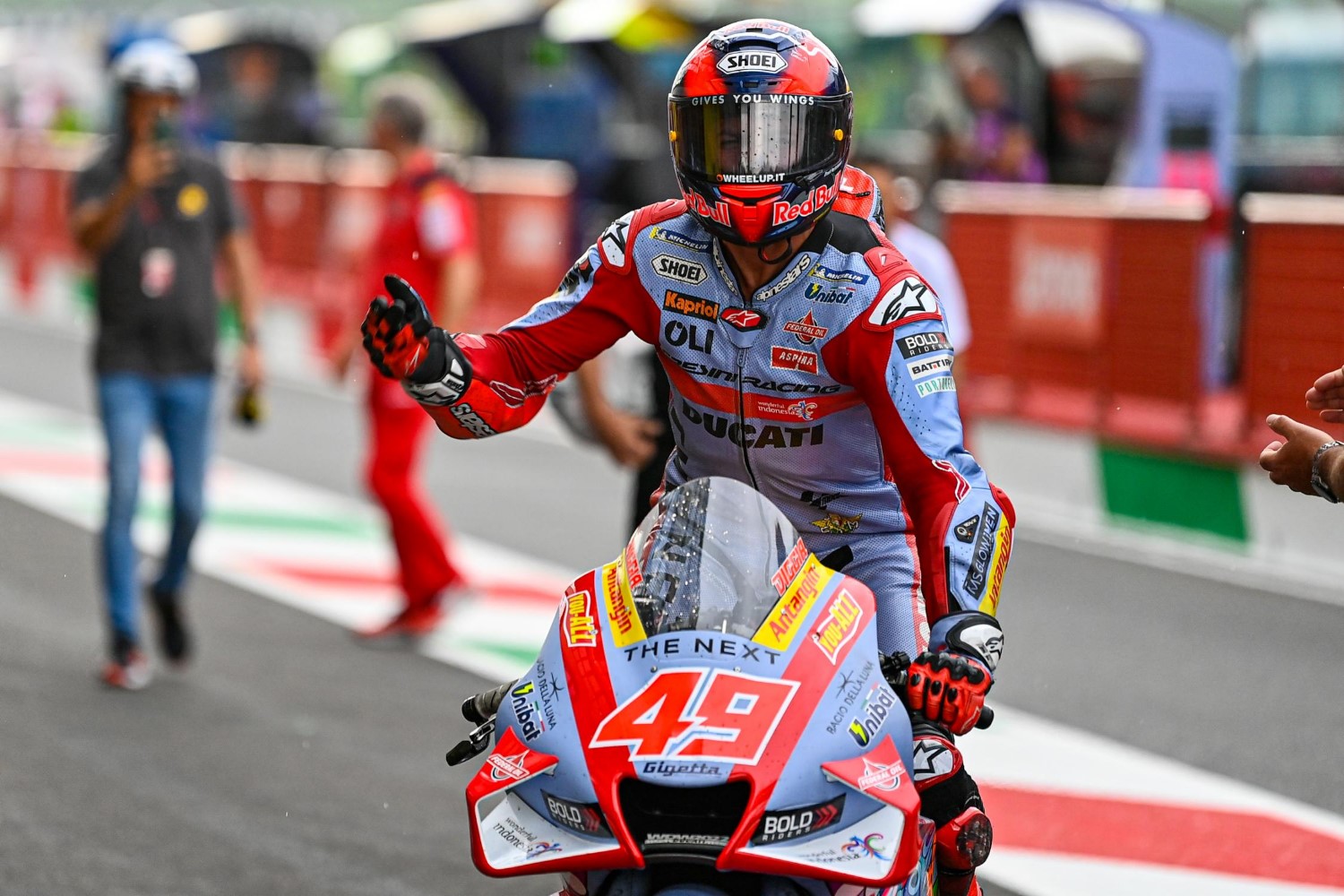 Di Giannantonio set a 1:46.156 with the checkered flag out to head up a front row which is comprised of three Italians from two Italian teams, riding Ducati’s Bologna bullets.

Q2 was red flagged barely more than a minute in as a result of a scary crash for Marquez at Turn 2. Despite having some knowledge of the conditions due to riding in Q1, the Spaniard highsided on his first lap out of the pits, virtually tearing the front wheel off his RC213V. Marquez was able to walk away but his bike caught fire and fluid spilt onto the track, necessitating a stoppage so that the surface could be cleaned up.

🛑 RED FLAG after this highside for @marcmarquez93 😱

Thankfully the 8-times champion was quickly back onto his feet but the session is stopped for a cleanup operation ⚠️#MotoGP | #ItalianGP 🇮🇹 pic.twitter.com/Qehewmtai8

On Saturday after qualifying for the Italian Grand Prix, Honda announced that Marquez would be travelling to the Mayo Clinic in Rochester, Minnesota to have a fourth operation on the right arm he badly broke back in 2020.

Marquez, having not felt significant improvements in recent months and consulting with other specialists, together with his medical team have considered the option of a new operation. The six-time MotoGP World Champion will travel to the United States on Tuesday, May 31 for surgery, under the direction of Dr. Joaquin Sánchez Sotelo. Once the post-operative period has been completed, he will return to Spain to begin his recovery. Doctors will then assess Marquez’s condition and his recovery period.

“Unfortunately, I have to take a break from the 2022 season that will keep me away from competition for a while. After all these months of intense work with my new medical team in Madrid, my physical condition has improved and I have reduced the discomfort in my right arm to be able to compete at the Grands Prix, but I still have significant limitations in my humerus that does not allow me to ride the bike properly and achieve the goals I have always set for myself.”

“It is for this reason, that together with my medical team, Dr. Samuel Antuña and Dr. Angel Cotorro, and after consulting with specialists from the Mayo Clinic, that I have made the decision to carry out a new operation with the aim of improving my position on the bike that will allow me to ride without the current limitations. Personally, I have the maximum motivation and enthusiasm to continue working and to make the effort to return to compete at the highest level.”

“I want to thank all the support that my family has always shown me, those trusted people around me, the Repsol Honda Team, my entire medical team and especially all the fans who are always there with me in the good and bad times.”

“Given the lack of sufficient clinical improvement with the rehabilitation treatment, and advised by his medical team, Marc Marquez will undergo a new surgical intervention at the Mayo Clinic in the US, to improve the discomfort in his right arm derived from the loss of mobility in the arm,” said Dr. Sanchez Sotelo.

“The surgery will consist of the extraction of the osteosynthesis material from his shoulder associated with a humeral osteotomy to increase the external rotation movement of the arm and maintain shoulder stability.”