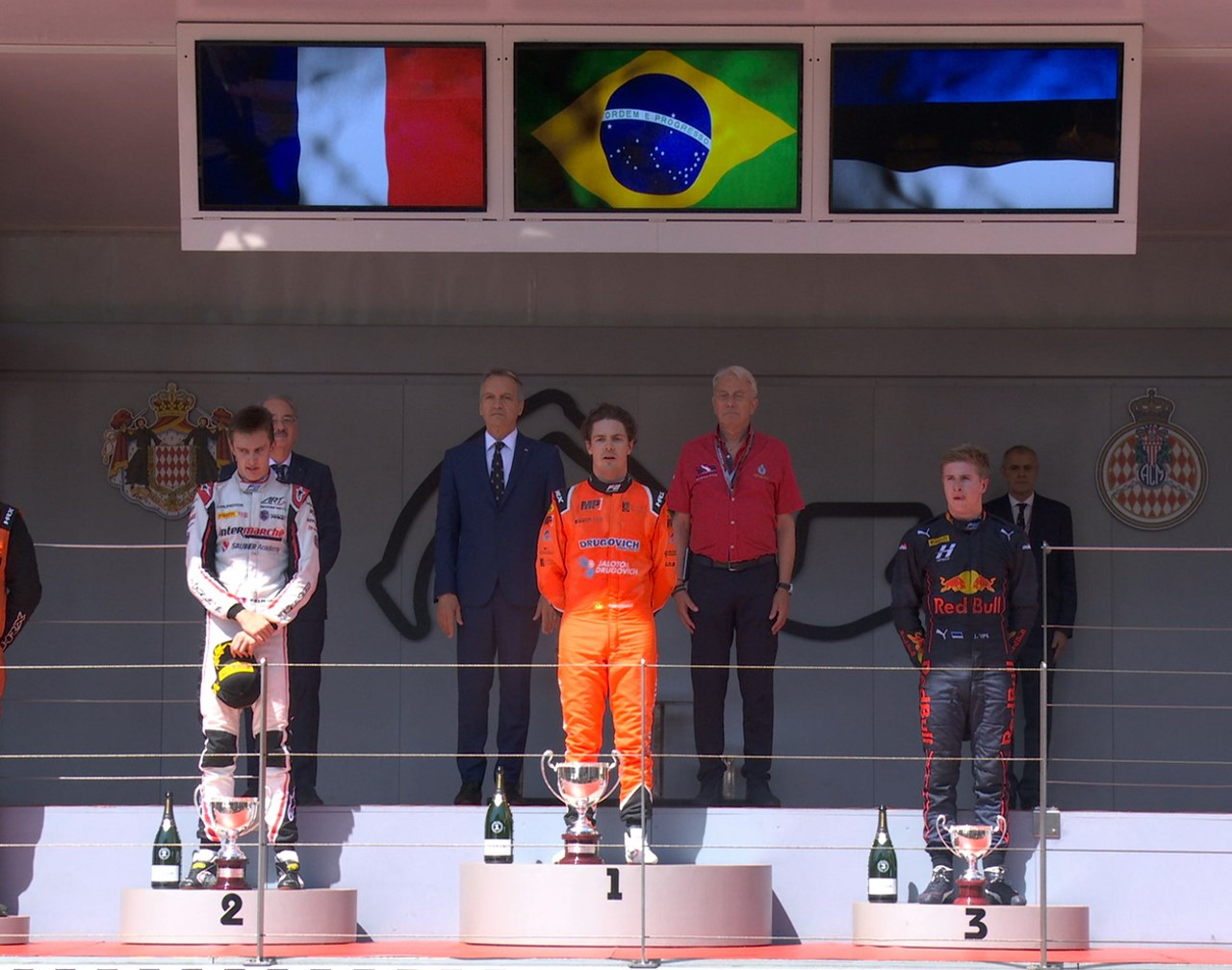 Pole-sitter Felipe Drugovich made it three wins in four races to extend his lead at the top of the Drivers’ Championship. After a disappointing Sprint Race retirement, the MP Motorsport driver turned his fortunes around to hold off Théo Pourchaire in a race of attrition, as the pair ran their supersoft tires for a whopping 22 laps around the challenging Monte Carlo streets.

A late gasp of pace from Jüri Vips wasn’t enough to bring him into the fight as the Hitech Grand Prix driver settled for third. Jack Doohan brought home another solid haul of points in fourth, ahead of Enzo Fittipaldi and Marcus Armstrong.

Yesterday’s Sprint Race winner Dennis Hauger finished seventh on the alternative strategy. His PREMA Racing teammate Jehan Daruvala was eighth, as Logan Sargeant recovered into the points and Marino Sato benefitted from a last-lap incident to complete the top 10.

It was all to play for on the front row, as pole-sitter Drugovich sought to recover his weekend whilst Pourchaire was keen to take his second Feature Race win in Monaco. After his maiden Formula 2 victory, Hauger opted to gamble on running the supersoft tires for his opening stint from ninth – one of only two drivers in the top 10 to do so.

Disaster struck for Carlin’s Liam Lawson before the lights went out. The New Zealander stalled on the grid from P5 during the formation lap and was forced to start from the pit lane instead. However, it was the opposite turn of events for Drugovich, getting a perfect getaway which forced Pourchaire to go on the defensive to keep Doohan behind.

Further back, PREMA teammates Hauger and Daruvala went wheel-to-wheel, with the Norwegian driver coming out on top before sending one down the outside of Fittipaldi at Turn 1 to climb up four places to fifth. Trident’s Calan Williams was another of the big movers on the opening lap jumping up four positions to tenth, but soon found himself falling prey to Ayumu Iwasa around the outside of the Grand Hotel Hairpin.

Out front, Drugovich set about clawing himself out of Pourchaire’s DRS range, clocking in fastest laps to go 2.8s clear of the ART Grand Prix driver. Things were heating up in the fight for third, as a three-way battle was beginning to unfold between Doohan, Vips and Hauger. The Virtuosi Racing driver found himself being hounded by the Hitech behind who was pushing hard on his tires to close the gap.

Iwasa and Sargeant became the first of the runners to hop into the pits on Lap 8, dropping them from within points range to the back of the order. Several drivers followed their lead. PREMA nailed the stop for Hauger to send him back out in P15, and with an empty track ahead he quickly got on with catching up to Lawson. However, a slow stop for Daruvala in seventh cost him valuable time in the pits on Lap 12.

Six laps later and Hauger found himself right on the rear end of the Carlin car. It was crucial for his strategy that he swiftly got past his fellow Red Bull junior, but that proved not to be an easy task. In the fight for the lead, Drugovich’s tires were falling off their performance cliff, but the Brazilian driver was reluctant to pit despite Pourchaire sitting just outside of his DRS window.

The front-runners were handed the perfect opportunity to switch out their soft tires on Lap 19, as Van Amersfoort Racing’s Amaury Cordeel tagged the wall at Anthony Noghes to bring out the Safety Car. This allowed Vips the opportunity to leap ahead of Doohan with an efficient stop, but with half the race still to go, it was going to be a challenge for the drivers to stretch their tires to over 20 laps.

Although Pourchaire loomed large in Drugovich’s mirrors on the restart, the MP driver got a clean getaway. Taking advantage of the tightly compacted field, Lawson risked a brave move up the inside of Marino Sato at the Grand Hotel Hairpin for P13 and set about recreating the move a lap later on Clément Novalak. Unfortunately, his rear tire clipped the MP car and Novalak ran into the wall – the French driver’s second retirement of the Monte Carlo weekend.

With the Safety Car making a second appearance, Pourchaire was eager to sit on Drugovich’s gearbox at the restart, staying within the Championship leader’s tow and putting him under pressure. However, this allowed third-placed Vips to match their pace and catch up to the back of the pair’s battle. Whilst the Frenchman tried to give the leader the hurry up, it looked as though the Estonian driver had saved some tire performance until the end, sitting just over one second behind the ART car.

As the race approached its final laps, Daruvala was in a rush. The Indian driver banged wheels with Williams to get through to P8, with Sargeant capitalizing on their fight to make his own way past the Trident car. The Australian driver put in a sterling effort to try to hold on to the final points-paying position. However, a last lap overtake from Iwasa sent the pair into the wall and promoted Sato to P10 for Virtuosi Racing.

Stretching his tires to their absolute limit, Drugovich managed to hold on to secure MP’s first victory in the Principality, despite a nervous moment into Rascasse on the penultimate lap. Pourchaire crossed the line to secure second, ahead of Vips and Doohan. Meanwhile, a quiet race for Fittipaldi was rewarded with fifth, ahead of Armstrong, Hauger, Daruvala, Sargeant and Sato.

“I’m extremely happy I’ve just won the Monaco Feature Race – I cannot explain the feeling. It was a tough race yesterday and today we managed to come back. I was struggling quite a lot towards the end and Théo (Pourchaire) was pressuring me a lot, but luckily, I didn’t make any mistakes.”

Another dominant performance by Felipe Drugovich has allowed the Brazilian driver to increase his tally in the Drivers’ Championship to 113 points, 32 points clear of his nearest rival Théo Pourchaire. Jehan Daruvala remains third ahead of Marcus Armstrong following the pair’s Sprint Race podiums, whilst Jüri Vips climbs up two places to fifth.

In the Teams’ Championship, MP Motorsport continue to lead the way on 135 points. ART Grand Prix stay second on 106, ahead of Hitech Grand Prix. PREMA Racing leap up to fourth following their 1-2 finish yesterday, as Carlin drop to fifth on 76 points.

Formula 2 will resume in just under two weeks’ time, as the drivers face another street circuit for the sixth round of the Championship – this time in Baku from June 10–12.