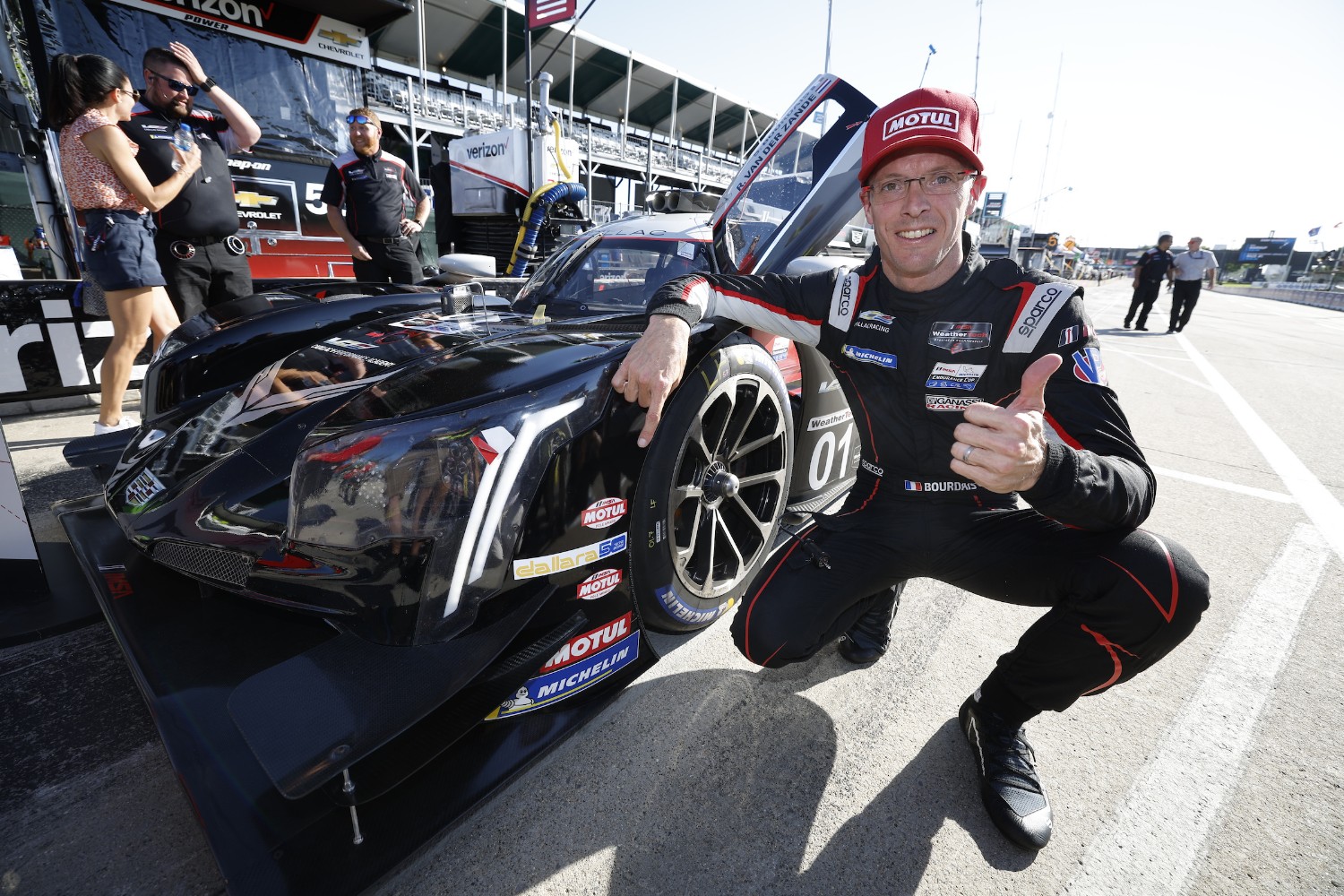 Sebastien Bourdais put the No. 01 V-Performance Academy Cadillac DPi-V.R on the pole for the fourth time in the past five IMSA WeatherTech SportsCar Championship races – setting the track qualifying lap record each time – and will lead the field to the green flag June 4 for the 100-minute Chevrolet Sports Car Classic.

Bourdais’ best lap was 0.110 seconds quicker than the No. 60 Meyer Shank Racing Acura ARX-05 of Tom Blomqvist, who ended up second in the action-packed 15-minute session.

Bourdais’ best lap came after a gusty tailwind caught him off-guard in Turn 2 and pushed the No. 01 Cadillac into the unforgiving barrier.

“At that point, I thought I cost myself a shot at the pole,” he said. “I still had some Michelin tires potential left and it all came together. That last lap was mega. It was a messy qualifying, but like I said you have to commit so much around here that you expose yourself.”

Kirkwood posted a time of 1:29.096, topping the field of 10 GTD cars to make a qualifying attempt.

“It’s been a hectic day, but I love driving race cars and that’s what we’re doing today. It’s been awesome driving in the Lexus RC F GT3 alongside Ben Barnicoat, who I drove with at Daytona. I couldn’t be happier with this outcome. It’s a lot of balancing. Making sure I make engineering meetings for both teams. Everyone has gathered around and helped out a lot to make sure that I get to all of the right places. We were quickest in IndyCar, quickest in our earlier practice and now the pole. I couldn’t be any happier with how this day went.”

TALK ABOUT HOW IMPORTANT THIS ONE WAS.

“I couldn’t leave the track record to Juan Pablo. It’s really sweet. Obviously, a couple of really big laps, a really big hit and super happy that the Cadillac is so strong because any other car, I think, that was the end of the session halfway through. I took off and ended in the wall pretty square in Turn 2. That was unexpected. There was a strong tailwind in (Turns) 1 and 2, and it caught me off-guard. Really happy for Cadillac at its home race. Big commitment around here; really rewarding. It’s really the first time I put everything together in qualifying in Detroit. I’ve been fast here, but never in qualifying. Hoping for a good day tomorrow. The 01 won last year so the expectations are high.”

DID YOUR FASTEST LAP COME AFTER YOU HIT THE WALL?

“Yes. I hit really hard, regrouped for two or three laps. I wasn’t really sure everything was right; I was checking tire pressures for a couple of laps. As bad a hit as it was, I didn’t want to keep pushing through but make sure everything was right. At that point, I thought I cost myself a shot at the pole. I still had some Michelin tires potential left and it all came together. That last lap was mega. It was a messy qualifying, but like I said you have to commit so much around here that you expose yourself. I think that’s why you see so many mistakes; it’s a really unforgiving place. A good, traditional street track with walls right on the edges. Very sharp curbs on the entry and exit. Big reward when you put it together but high intensity behind the wheel.”

AN UP AND DOWN YEAR FOR YOU. DO YOU WISH IT WAS MORE CONSISTENT?

“For sure. I’ve had a fairly uneventful season. Mostly, it’s been running out of luck. We’ve had electrical issues that really never happens. It’s not so much on the guys. I don’t think I’ve hit the wall that many times in succession in a long time – since I was 16 or 17 when I was dumb and stupid. I guess I’m not getting any wiser. You have to hustle the car around so much and push that you expose yourself. The BoP is tough for us on a track that is historically strong for us. I think it proves that we have to dig that deep. Track position is key. We haven’t had the season we’ve wanted so far as far as results. We’ve been really fast and have had a bunch of poles, but opportunity doesn’t reward the points you need to win the championship. We’re hoping to kickstart our season in the second half and put some points on the board. Hopefully, it starts tomorrow.”

MAXIMIZING THE POINTS IN QUALIFYING HELPS A LITTLE?

“It’s a small consolation prize. We’re 200 points behind in the championship. We have to start getting things to come our way and our opponents to have some issues if we want to get back in that fight. We have to keep our heads down, push as hard as we can and minimize mistakes and hope we get a little luck at some point.”