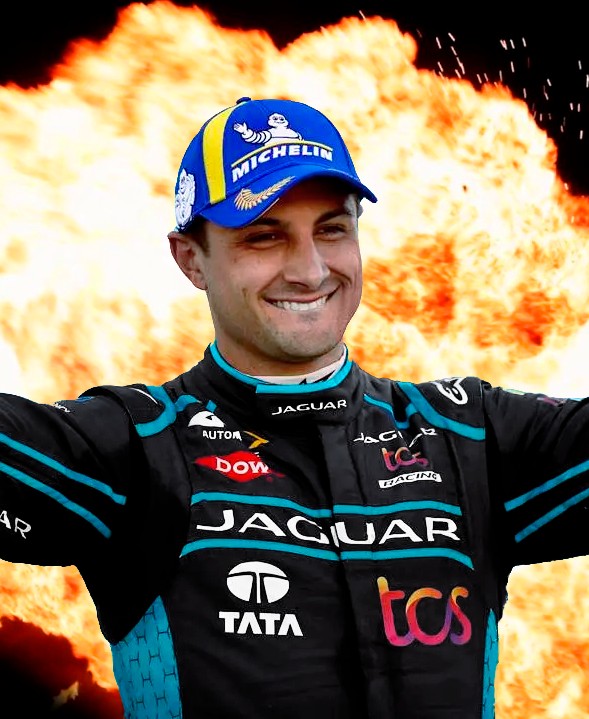 The Jaguar driver made a late-race lunge that caught then-leader Vergne off-guard at Turn 7 on Lap 31 – an opportunistic move from way back. From there, energy management became increasingly critical for the lead duo as they fought between themselves and against searing track temperatures at the Jakarta E-Prix International Circuit, right by Ancol Beach.

That allowed Mortara to join the party and look to pick up the pieces as Evans and Vergne squabbled. Evans had some five minutes plus added time to hold the pair off, with the race anybody’s heading into the final turn and his rear tires fading fast. The Kiwi did hold on, though, to head Vergne home with Mortara right with both of them – all three drivers within a second of one-another.

Antonio Felix da Costa (DS TECHEETAH) slipped from second at the start to fourth come the checkered flag, with standings leader Stoffel Vandoorne (Mercedes-EQ) making three crucial passes through the race to wind up fifth and retain his Drivers’ World Championship advantage – albeit a more slender one.

With Vandoorne’s closest rivals all finishing on the podium, the Drivers’ standings concertinaed up: now just 12 points split the top four, with Vergne five points back from the Belgian, Mortara two shy of the Frenchman in third and Evans another five back in fourth.

Mercedes-EQ still sit atop the Teams’ running on 186 points, 16 ahead of DS TECHEETAH which climbs above ROKiT Venturi Racing in the points table.

Vergne and da Costa led away from the front despite the Portuguese bogging down and having to fend off the attentions of Evans in the Jaguar. Mortara followed in fourth with Dennis fifth and Vandoorne made two spots up on the opening lap to take sixth.

Just a lap into the race, the Safety Car was deployed to deal with Oliver Rowland’s stricken Mahindra Racing car – short of a wheel. On the restart, Evans stuck right with the lead DS’ and with da Costa locking up and running wide at Turn 7, the Jaguar driver made his move to take second spot – an uncharacteristic mistake from da Costa.

On Lap 7, Vergne was the first of the front-runners to jump for ATTACK MODE, with his teammate da Costa following. Both lost a place, with Evans temporarily taking the lead. The thought behind taking the 30kW boost early being that the batteries would likely be cooler than if taken in late in the race – lower performance loss, and maximum gain from the ATTACK MODE boost while harming usable energy reserves least.

Evans followed on Lap 9 with his first jump through the ATTACK MODE loop, and Vergne retook the lead. Of the front five, Mortara was the last to blink.

Vandoorne was the penultimate top 10 runner to take his first ATTACK MODE, holding sixth in the process while catching a big slide while driving through the activation zone.

Vergne’s second dose of ATTACK MODE left him second but right on the tail of leader Evans, with the Jaguar driver still to take his second boost. The Frenchman dispatched the Kiwi into Turn 1 and made use of FANBOOST to draw a small gap. Evans, meanwhile, now had Mortara on his tail – the Venturi driver well placed to take a net second once everything shook out.

Wehrlein was a big mover after a five-place penalty had left him 11th on the grid. The German had worked his Porsche up to eighth early on and right on the back of Vandoorne – before eventually passing the Belgian for a net fifth with Vandoorne missing the ATTACK MODE activation loop on his second visit. The Mercedes-EQ man fought back with the remainder of his 30kW boost, though, leaving Wehrlein back where he’d started.

With 20 laps in the books, Vergne already looked to manage things with a gap of a second to second-placed Evans, Mortara, da Costa, Vandoorne and Wehrlein.

Dennis, having run fourth early on, made it by Wehrlein on Lap 22 and was tasked with holding off the Porsche, Lucas di Grassi (ROKiT Venturi Racing) and Andre Lotterer in the second Porsche.

Mortara hadn’t done enough to hold second spot through his second ATTACK MODE activation – the Venturi falling to fourth but challenging da Costa just ahead. Evans’ final dose of ATTACK MODE on Lap 25 saw him retain second spot by a whisker, however, much to Jaguar Team Principal James Barclay’s delight.

Da Costa couldn’t hold off Mortara for long, though, despite some help from FANBOOST. Mortara made the remnants of his second ATTACK MODE count to pinch third back from the Portuguese on Lap 27.

In the battle for sixth, again on Lap 27, Dennis fended off the attentions of di Grassi in style with a nice switchback on the Brazilian. A strong race for the Brit who looked back on-song.

The lead pair – and title rivals – looked to be fighting among themselves heading into the final 10 minutes – Vergne from Evans with the duo within 0.5 seconds of one-another and three clear of Mortara in third.

On Lap 30, contact left Nyck de Vries’ championship charge was left deflated by a left-rear puncture – the Mercedes-EQ driver forced to retire from the race.

Lap 31 saw the defining move of the race – Jaguar’s Evans spying an opportunistic move on leader Vergne at Turn 7. The Kiwi got the pass done on the brakes, catching Vergne unawares and got the car stopped and rotated into the apex to hold on.

From there and inside the last five minutes, it looked good for Jaguar and Evans – a percent to the good on usable energy. However, as the minutes ticked down and the race entered added time, that advantage ebbed away with Mortara also joining the lead duo.

Vergne was all over the diffuser of leader Evans, with Mortara waiting to pounce with two laps to run – the Venturi best-placed on energy.

Into the final three turns and energy became critical, with the lead trio crossing the line Evans from Vergne and Mortara – all together.