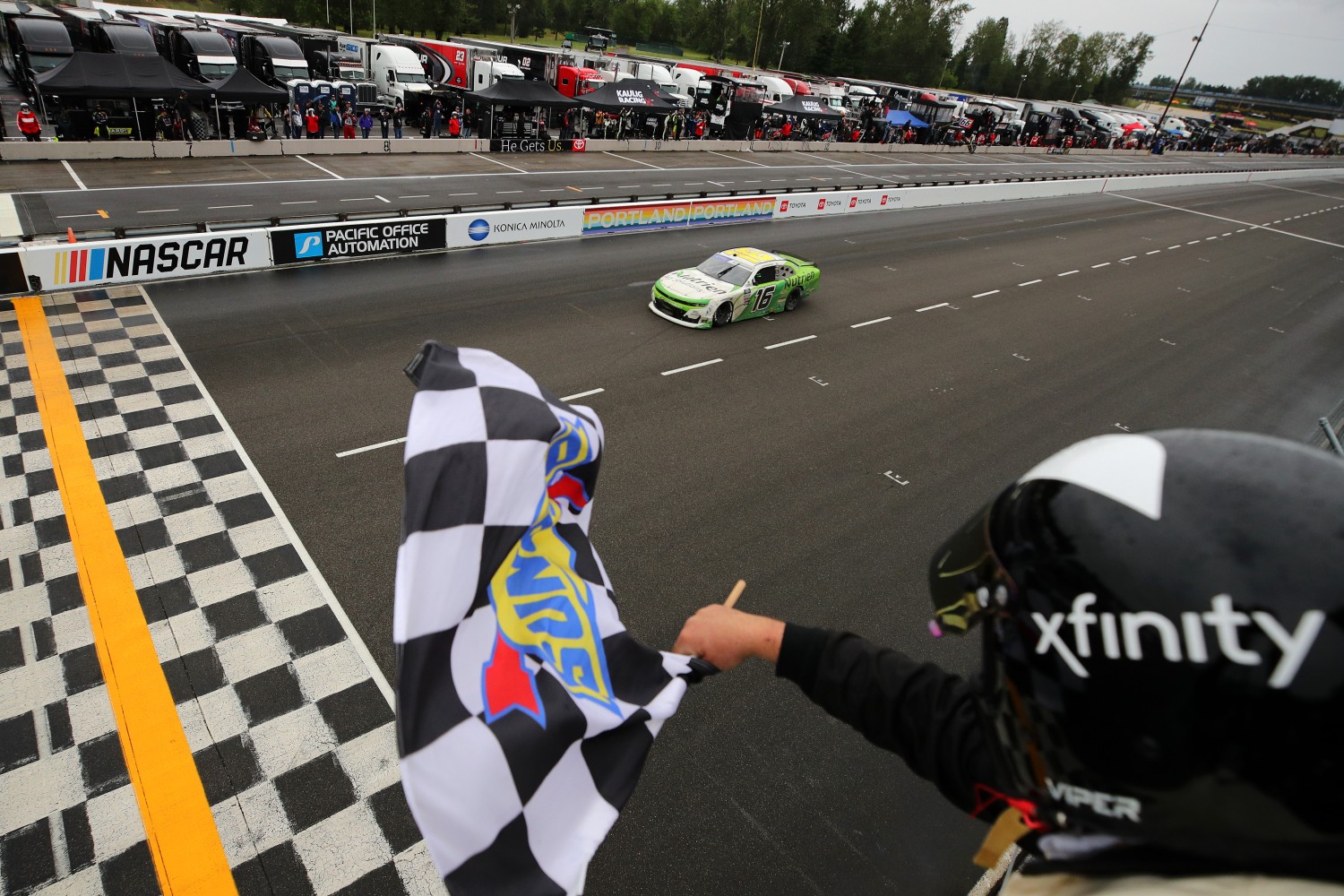 Allmendinger literally came from last on the grid to earn the win – after changing “everything but the motor” before the race, he claimed in victory lane. His No. 16 Kaulig Racing Chevrolet led only six of the race’s 75 laps and beat Myatt Snider by 2.879 seconds to earn the popular veteran his second Xfinity Series victory of 2022; his other win coming on the road course at the Circuit of the Americas early this season.

“It might be one of the craziest wins I’ve ever had,’’ the 12-time Xfinity Series winner Allmendinger said smiling.

It would be hard to argue otherwise. Not only did the 40-year-old Californian Allmendinger start from the rear, he had his first of a half-dozen off-track excursions before even taking the checkered flag. He went down a lap early but managed to stay focused and rally back to the lead lap in a race that had nine cautions and only 21 of the 38 cars on the lead lap at the finish.

“Man I cannot believe this, I crashed before it went green,’’ said Allmendinger, who also earned his first Champ Car win at Portland back in 2006.

“I was making so many mistakes, trying so hard,’’ he added. “I put so much pressure on myself in these races because I know what everyone expects and I know what I expect out of myself, more importantly. But what a win.’’

Snider, who led five laps in the No. 31 Jordan Anderson Racing Chevrolet, managed a smile himself acknowledging that runner-up to Allmendinger on a road course isn’t such a horrible defeat.

“Just AJ’s experience,’’ Snider said, managing a smile as he explained the difference in winning Saturday. “I could tell he was setting up those [corner] exits better than I was. To me, that was good hard racing.

“So cool to be disappointed with second [place] with a team that’s only a year-and-a-half old and to get my first stage win and maybe the first top-three with this car,’’ he added.

As with Allmendinger, many of the top finishers had adventurous days.

The opening stages on the 1.97-mile course called for wet tires with a steady downpour at the green flag that dissipated slowly as the race progressed. By the Stage 2 break, most teams opted for the Goodyear slicks as the rain lessened and was replaced with heavy mist. Only to have the rain come back in the final stage – after cars had swapped to the dry tires.

It was the sort of drama that characterized the race.

Joe Gibbs Racing driver Gibbs led a race-best 42 laps in the No. 54 JGR Toyota but was involved in several on-track incidents vying for the lead – and even just driving under caution at one point, hit from behind by Jesse Iwuji, who was three laps down.

Gragson, who like Allmendinger started from the rear of the field, made up a race-best 22 positions by the start of Stage 2 and was running top five when he was pushed off course by Gibbs on a mid-race restart that proved to be consequential for many of the day’s top drivers.

Gibbs had contact with Gragson then with Sheldon Creed – resulting in both Gibbs and Creed’s cars going off-course. Creed returned to track and then was involved in a multi-car accident with 20 laps to go – damaging his No. 2 Richard Childress Racing Chevrolet beyond repair.

“I thought we had an okay day going. I made a mistake running second there but got back to the lead,’’ said Creed, whose wife is due to give birth to their first child any day now.

“The way my year’s gone, every time we have speed something goes wrong. … Today I felt like we had a really good shot at winning.’’

With the victory, Allmendinger extended his championship lead over Gibbs to 44 points. Gragson’s ninth-place finish keeps him 45 points behind.