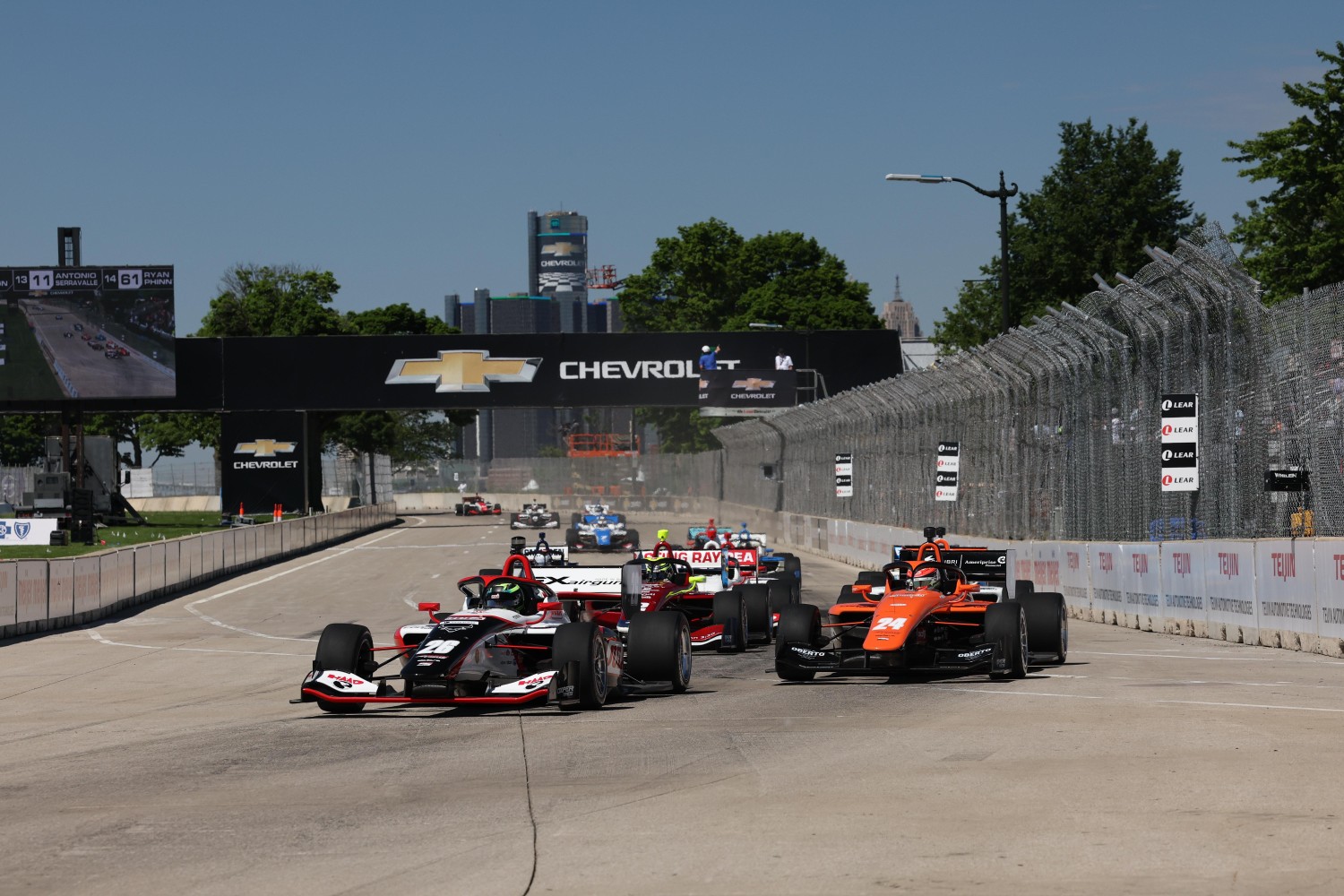 Linus Lundqvist expanded his lead in the Indy Lights Presented by Cooper Tires championship with a dominant drive to victory Saturday in Race 1 of the Detroit Grand Prix doubleheader.

Swedish driver Lundqvist drove his No. 26 HMD Motorsports with Dale Coyne Racing car to a 3.7232-second victory from pole over the No. 24 Global Racing Group with HMD machine of teammate Benjamin Pedersen, leading all 25 laps. St. Petersburg race winner Matthew Brabham finished third in the No. 83 Andretti Autosport car.

“I can’t really ask for much more, can I?” Lundqvist said. “First, a massive thank you to my team, HMD Motorsports with Dale Coyne Racing. Congrats to my teammate on P2. Good for us to get a 1-2 as a team.

“It’s been a perfect day for us today. We’ve got another race tomorrow, but we’ll celebrate this one a little bit and full focus on tomorrow.”

Christian Bogle finished a career-best fourth in the No. 7 HMD Motorsports with Dale Coyne Racing car, with 17-year-old rookie Kyffin Simpson rounding out the top five in the No. 21 TJ Motorsports car, tying a career best.

It was the third victory of the season and sixth career Lights victory for Lundqvist, who grew his series lead to 58 points over Pedersen, his closest pursuer. Lundqvist’s previous wins this season, at Barber Motorsports Park and in the second race of the Grand Prix of Indianapolis doubleheader, also came from the pole.

The pace car was the only thing that could slow Lundqvist during the 25-lap race on the 14-turn, 2.35-mile temporary street circuit at the Raceway at Belle Isle Park.

Lundqvist rocketed away from the field from the drop of the green flag, building a lead of 1.7 seconds after the first lap. He continued to pull away from his rivals, returning within their grasp only during two full-course caution periods.

The second caution came on Lap 18 when Christian Rasmussen made contact with the barrier in Turn 5 in his No. 28 Road to Indy/Stellrecht machine fielded by Andretti Autosport. But once again, Lundqvist waved goodbye to Pedersen on the restart on Lap 21 and cruised to victory.

A dramatic, cruel twist after the final restart perhaps prevented HMD from a podium sweep. Danial Frost was running third with two laps remaining when his No. 68 HMD Motorsports with Dale Coyne Racing entry slowed on the course and limped to the pits. Frost ended up 10th.

Before Frost slowed, he and Brabham produced an entertaining side-by-side duel for third place on the lap after the final restart. Frost, hugging the inside line, was able to resist the moves of Brabham.

Sting Ray Robb, who started third, also had a disappointing end to his racing while driving in a podium position. On Lap 14, Robb made an outside move around Pedersen for second in the No. 2 Sekady car fielded by Andretti Autosport, but he slid into the tire barrier in Turn 7 while trying to complete the pass. Robb ended up 11th.