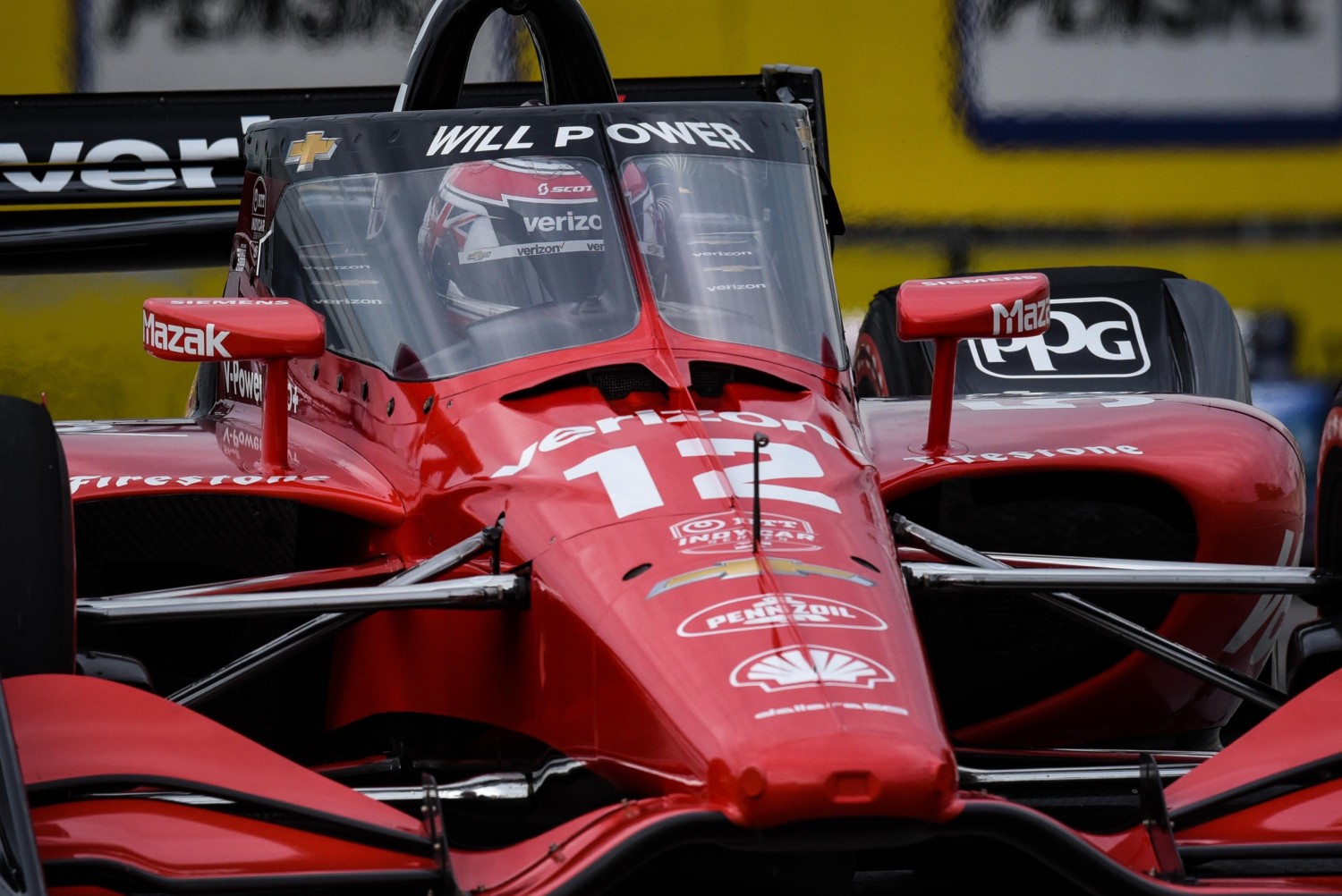 Penske veteran #12 Will Power managed his wearing soft Firestone red tires to perfection and held off a charging #27 Alexander Rossi by 1.0s to win the Chevrolet Detroit GP presented by Lear on Belle Isle.

#9 Scott Dixon was third, 6.1s behind while Power’s Penske teammate and polesitter #2 Josef Newgarden was a further 3.5s back.

Pato O’Ward rounded out the top-5 in his #5 Arrow McLaren Chevy.

Black tires were the way to go today.  Will Power and Scott Dixon both started on the black primary tire, the only two in the top 15 on the grid.  Gambling that they were going to hold up better than the reds, both drivers moved up the grid quickly.

“For one, I didn’t have to have a blistering outlap and destroy the tire,” said Power. I was very conscious and drove it very straight and very focused. I could have pushed at the end; they didn’t like die. It was a job well done by the team. I was a bit worried when they went black-black, and I was like, ‘Man, we’re saving the reds for the end? I hope there aren’t any yellows.’ But a full green race? Crazy, huh?”

Today’s win was a proper send-off from Belle Isle as the Detroit stop on the schedule moves to downtown next season.

Teams unfurled different tire and fuel strategies almost from the drop of the green flag.

Andretti Autosport called Rossi to the pits after just four laps to remove the Firestone “red” tires and affix the more durable “black” tires, choosing a three-stop strategy. All drivers must run at least one lap per race on both the primary and alternate tires, per NTT INDYCAR SERIES rules.

Team Penske and Chip Ganassi Racing chose a different route for Power and Dixon, respectively, opting for two-stop races. But there was variety even among that option.

Power started the race on primary tires and didn’t pit for a second pair of “blacks” until Lap 26. He stayed on those tires before making a mandatory switch to “reds” on Lap 51 for the final 20 laps of the race.

Dixon started on primary tires and switched to alternate tires on Lap 27. He made those grippy, but less durable, tires last until switching back to primaries during his second and final stop on Lap 45.

Meanwhile, Rossi had stopped for primary tires on Lap 25 and 47, completing his team’s three-stop strategy.

When Power exited the pits on Lap 51 after his final stop, he led Rossi by 16.079 seconds. He also had nearly twice as much of his allotted push-to-pass time left as Rossi.

The chase was on.

Rossi trimmed the gap to 12.128 seconds with 10 laps left, facing a daunting challenge of making up more than 1.2 seconds per lap to catch Power, let alone pass him. A late caution period would have done that dirty work for Rossi, who started 11th, but it never came.

Still, it appeared Rossi might catch a break with eight laps to go when Power pulled close to the No. 45 Hy-Vee Honda of Jack Harvey, who was running at the tail end of the lead lap. Knowing the risks of trying to pass Harvey on degrading alternate tires, Power wisely instead stayed just behind the Englishman and managed the turbulence and his tires in a deft display of skill.

The gap tightened to 7.7 seconds with five laps left, as a steeper degradation of the less-durable alternate tire began to take its toll. With three laps to go, Rossi pulled to within 6.5 seconds.

Then, with one lap to go, the gap was 2.8 seconds. Rossi was able to trim another 1.8 seconds on the final trip at speed around Belle Isle for the NTT INDYCAR SERIES, but he ran out of laps to get close enough to Power to try to make a race-winning pass.

“I think one more lap would have been really interesting,” Rossi said. “But you’ve got to give credit to the 12 guys and Will. That’s hard to do at the end, to hang on. It was a good recovery from yesterday. The strategy was good.”