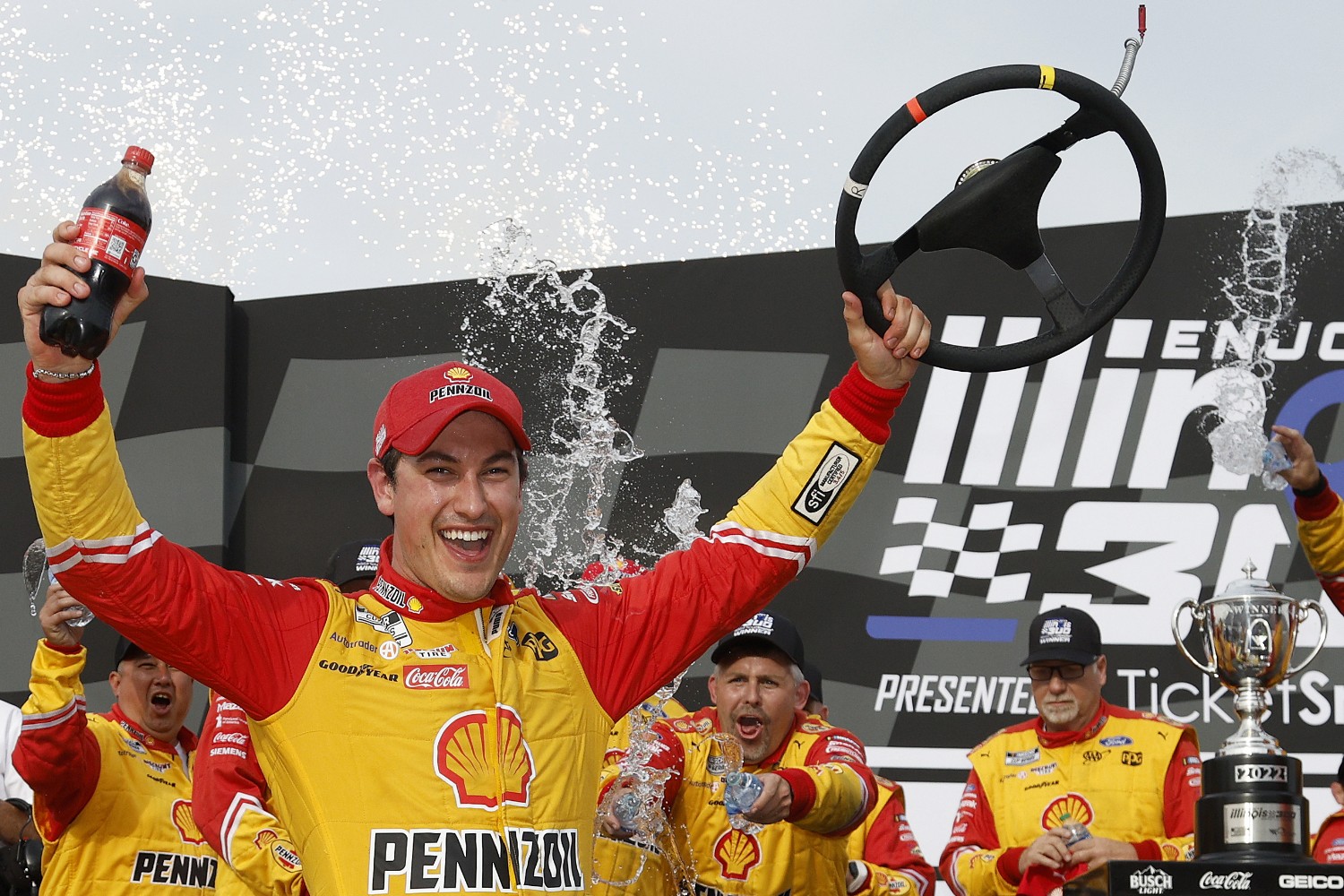 After a brake rotor failure sent Kevin Harvick’s Ford rocketing into the Turn 3 wall on Lap 236 of a scheduled 240 in Sunday’s Enjoy Illinois 300, Busch, as the leader, picked the outside lane. Logano lined up beside Busch to the inside, with teammate Ryan Blaney behind him.

After the overtime restart — with Blaney giving Logano’s No. 22 Team Penske Ford a serendipitous shove — Logano and Busch swapped the lead until Busch washed up the track in Turns 3 and 4 on the white-flag lap.

That enabled Logano to secure the victory by 0.655 seconds and indulged his penchant for winning debut races in the NASCAR Cup Series. Last year, Logano won the inaugural event on the Bristol Motor Speedway Dirt Track.

“Thanks for coming out, guys,” Logano said, acknowledging the sellout crowd. “I hope you enjoyed that race. It doesn’t get much better than that. Racing for the lead like that with Kyle, one of the best. It was a lot of fun. Crossing each other back and forth. I knew it was coming. I did it to him; I knew he was going to do it to me. We crossed back and forth there a couple of times…

“What a great car, though. Really fast. I kind of messed up in qualifying, and (crew chief) Paul (Wolfe) made a great call putting two tires on (during the No. 22 Team Penske Ford’s final pit stop). Blaney did a great job with the push down into (Turn) 1, which kept me close at least and being able to make the move.

“Racing for the lead like that with Kyle, one of the best. It was a lot of fun. Crossing each other back and forth. I knew it was coming. I did it to him; I knew he was going to do it to me. We crossed back and forth there in the last lap there a couple of times. Good for Pennzoil Mustang for sure. Nice to get a few wins on the season here, start collecting those points, playoff points. What a great car, though. Really fast. I kind of messed up in qualifying, and Paul made a great call putting two tires on. Blaney did a great job with the push down in the one, which kept me close at least and being able to make the move. Good racing there.”

The victory was Logano’s second of the season and the 29th of his career. Kurt Busch ran third behind Logano and Kyle Bush, with Ryan Blaney coming home fourth and Aric Almirola fifth.

“Our car just took too long to come in,” Busch said. “Better on the long run. Better up top. Top is not good to fire off on, but great job by the Snickers guys. Again, we stayed in the running all day long and fought hard and thought maybe we could — but that was it.”

As riveting as the drama of the overtime turned out to be, the subplot involving Chastain and his two primary victims — Denny Hamlin and Chase Elliott — drew the lion’s share of the focus as the race developed.

On Lap 64, Chastain drove hard into Turn 1 behind Hamlin and knocked the No. 11 Toyota up the track and into the wall, ending Hamlin’s chance at a strong finish. Hamlin subsequently expressed his displeasure by running Chastain down to the apron on the backstretch.

On Lap 101, contact from Chastain’s Chevrolet turned Elliott’s No. 9 Camaro and sent it spinning into the inside barrier off Turn 4. On the subsequent restart, Elliott got a measure of revenge when he rubbed Chastain’s Chevy and moved it up the track.

Chastain rallied to finish eighth and expressed his remorse after the race. Elliott took 21st, and Hamlin – last weekend’s winner of the Coca-Cola 600 – was 34th, 11 laps down.

Chase Briscoe started from the pole position and led the first 27 laps until his No. 14 Stewart-Haas Racing Ford suffered a flat tire. He lost a lap after a pit stop and finished 24th on the lead lap.

Zane Smith, a late-hour sub in the No. 17 RFK Racing Ford after Chris Buescher contracted COVID-19 last week, finished 17th in his Cup Series debut. Smith was bumped into a pit-road spin by Michael McDowell’s No. 34 Ford during the Stage 1 intermission, but he continued with minimal damage.

Martin Truex Jr. finished sixth, followed by Erik Jones, Chastain, Christopher Bell and AJ Allmendinger, who won Saturday’s debut Xfinity Series race at Portland International Raceway and started from the rear of the field with no prior laps on the track after flying to St. Louis for the Cup event.