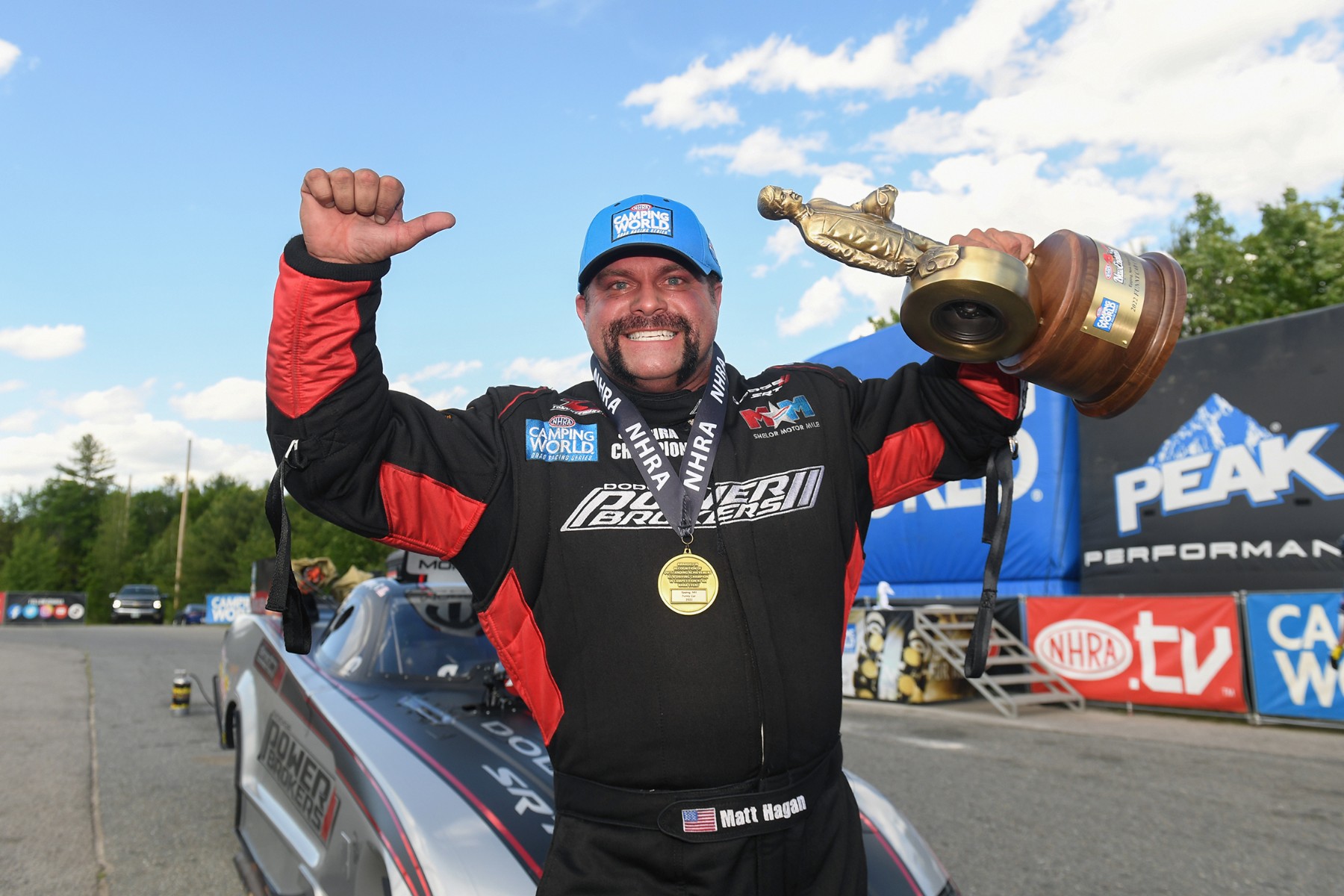 For the first time this year, Funny Car points leader Matt Hagan knocked off Robert Hight in the final round, powering to an impressive third win of the season on Sunday at the NHRA New England Nationals at a sold-out New England Dragway.

Hagan delivered a run of 3.922-seconds at 327.98 mph in his 11,000-horsepower Dodge Power Brokers Charger SRT Hellcat for Tony Stewart Racing in the championship round against Hight, as the two standouts met in the final for the third time in 2022. Hight won the first two, including at the most recent race, but Hagan earned his 42nd career win on Sunday. It’s also his fourth win at New England Dragway in the past five events, as Hagan knocked off Dale Creasy Jr. and J.R. Todd to reach the final round. It was his sixth championship round in eight races and followed with the impressive win against Hight.

“It was just a great weekend, and I can’t say enough about (crew chief) Dickie Venables,” Hagan said. “Nothing really needs to be said because the race car speaks for itself. All the boys wrenching on the car just do a great job, and when I crawl in that car, I don’t have to think about anything other than leaving the starting line. I’m nothing without those guys, and I’m so proud of them. They truly deserve all the credit, and I should be giving all my trophies to these guys.

“We’re in a great rhythm, and Dickie is in a great mind space. I think we’re going to keep doing what we’re doing. There will be some lows, but that’s drag racing. You just try to ride this wave as long as you can. I give a lot of respect to Robert Hight and Jimmy Prock for showing up and showing out, and I love that. It creates a great rivalry for the fans.”

Hight stayed second in points, advancing to the final round for the fifth time this year and 89th overall with wins against Cory Lee, Alexis DeJoria and defending world champion Ron Capps.

In Top Fuel, Salinas drove to his third win in what has been a stellar 2022 campaign, powering past Justin Ashley in the final round with a 3.729 at 330.80 in his 11,000-horsepower Valley Services/Scrappers Racing dragster. A year after falling in the final round at New England Dragway, Salinas made amends on Sunday, climbing to second in points with his sixth career victory. He reached the final round thanks to victories against Joe Morrison, Leah Pruett, and Austin Prock before getting past Ashley to pick up his first win at the historic facility.

“I was glad to come back and redeem myself,” Salinas said. “I will honestly say I got lucky. This has been an off week for me. I’ve been all over the place and a mess. I would call this a lucky week for me. I was doing a couple of silly things in the car, but we know we have a good car, and we were still able to get the win. I love the people here and everyone here is so awesome. The fans and the people are amazing. They’re good people and 90 percent of them thanked us for coming. It’s a timeless place.”

Ashley reached the finals for the third time this year after round wins against Dan Mercier and Shawn Langdon. Brittany Force, who set the track speed record on Sunday with a run of 334.90, maintained the points lead, now 50 points over Salinas.

More than a month between Pro Stock races didn’t slow down Enders one bit, as the points leader stayed red-hot in Epping, capping off her weekend with a winning run of 6.547 at 211.00 in the finals in her Melling Performance/Elite Motorsports Chevrolet Camaro. Enders knocked off defending event winner Aaron Stanfield in the final round, claiming her third straight victory and fourth in what’s been a dominant 2022 season.

Enders reached the final round with victories against Kenny Delco, defending world champion Greg Anderson and Mason McGaha, and then led wire-to-wire against Stanfield to run away with her 37th career win. It’s only the second time in the four-time world champ’s career where she’s had a three-race winning streak, showing just how motivated she is to claim a fifth world title.

“We’re off to a tremendous start, and we’re going to enjoy the ride while it lasts and try to capitalize on it,” Enders said. “But this is a dream come true. Any weekend we can stick two Elite Motorsports cars in the final round is awesome and winning here in 2017 kind of turned the tides for us. This is a unique place to run, and the cars usually run really well here. I love racing in this part of the country. It’s exciting to see the fan’s reception for our class when nitro kind of takes the lead because they explode and crash and run into things. But Pro Stock is so intricate and precise, and the fans here love it. This is Pro Stock country.

“This is our effort for our fifth title, and the fashion that we lost in last year was pretty gut wrenching. But that gave us the motivation to go to work. We’ve started the season on the right foot, and I’m blessed to be the girl that gets to drive that racecar.”

Stanfield advanced to the final round for the third time this year, knocking off Troy Coughlin Jr., Deric Kramer, and Fernando Cuadra Jr. He also stayed second in points, though Enders’ lead grew to 92 points with the victory.