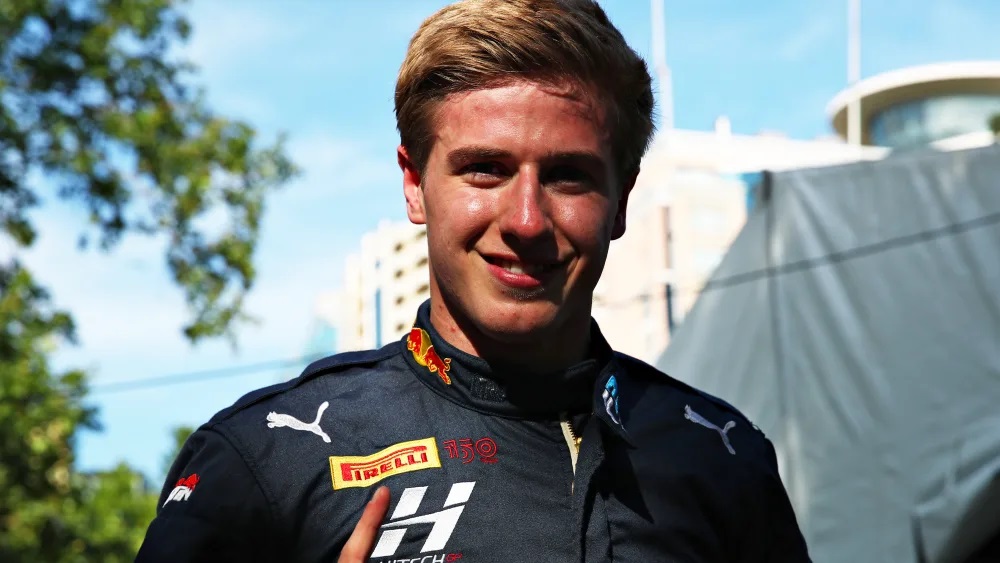 Having narrowly missed out on pole position last year, Jüri Vips set out to make amends with a last-minute charge to P1 in a highly competitive Formula 2 Qualifying session in Baku. The Hitech Grand Prix driver had been stuck down in 10th following his opening run, but a surprise burst of pace was enough to put him 0.163s clear of Liam Lawson – as Dennis Hauger made it an all-Red Bull junior top three.

Jake Hughes got running underway around the aptly named City of Winds, clocking in the first representative time of a 1:56.556. However, that time was swiftly blown out of the water by Ayumu Iwasa. Rapid straight out of the box, the DAMS driver was the one to beat. His time of 1:54.483 sent him over sixth tenths clear of Hauger, whilst Championship leader Felipe Drugovich slotted into third on his first attempt.

Optimizing their purple-walled supersoft tires would be crucial, as track temperatures climbed to around 39.8˚. Able to find an extra bit of tire life on his second attempt, Marcus Armstrong shot up into P2, as Drugovich held firm in third.

The twisty and unforgiving Baku City Circuit left no margin for error, as the old city walls closed in quickly around the drivers. Having found the barriers in Practice earlier on in the day, Ralph Boschung went deep into the run-off at Turn 3 and was unable to set a representative time on his first set of Pirelli tires.

As no drivers opted to run in the gap, Cem Bölükbasi led the grid out with 11 minutes remaining. Things soon got frantic as the 20 cars jostled for track position on their preparation laps, keen to utilize the slipstream without getting caught out by traffic ahead.

However, no sooner had several drivers begun their flying laps was running brought to a sudden halt. Determined to push his DAMS car to its limits, provisional pole-sitter Iwasa carried too much speed into Turn 4 and collided with the barrier – having looked untouchable early on.

The Japanese driver’s mistake blew the fight for pole wide open once again, as Richard Verschoor and Hauger both clocked in their personal bests, with the PREMA Racing driver getting a handy tow from Verschoor’s Trident teammate Calan Williams.

Yet it was the final minute of the session that showed who had truly mastered all of Baku’s tricks. A storming performance in the middle sector helped Vips leapfrog his rivals into P1 with a 1:53.762 – over five tenths faster than last year’s pole position time set by Lawson.

Saving his best for last, Lawson narrowly missed out on repeating that feat, taking the checkered flag 0.163s down on the Estonian driver’s lap. Hauger sealed his best F2 Qualifying result so far in third. Meanwhile, Armstrong made it two Hitechs in the top four after improving on his final attempt.

Championship leader Drugovich was forced to settle for fifth, as Verschoor put in another strong performance to take sixth. Despite a late whack to the wall, Carlin’s Logan Sargeant was seventh, ahead of Jehan Daruvala, Frederik Vesti and Jake Hughes, who rounded out the top 10. The top 16 all ended their running within a second of Vips’ pole position time.

Van Amersfoort Racing will have their eye on the top step of the podium as Hughes lines up on reverse grid pole for Saturday’s Sprint Race, with action scheduled to get underway at 13:30PM local time.