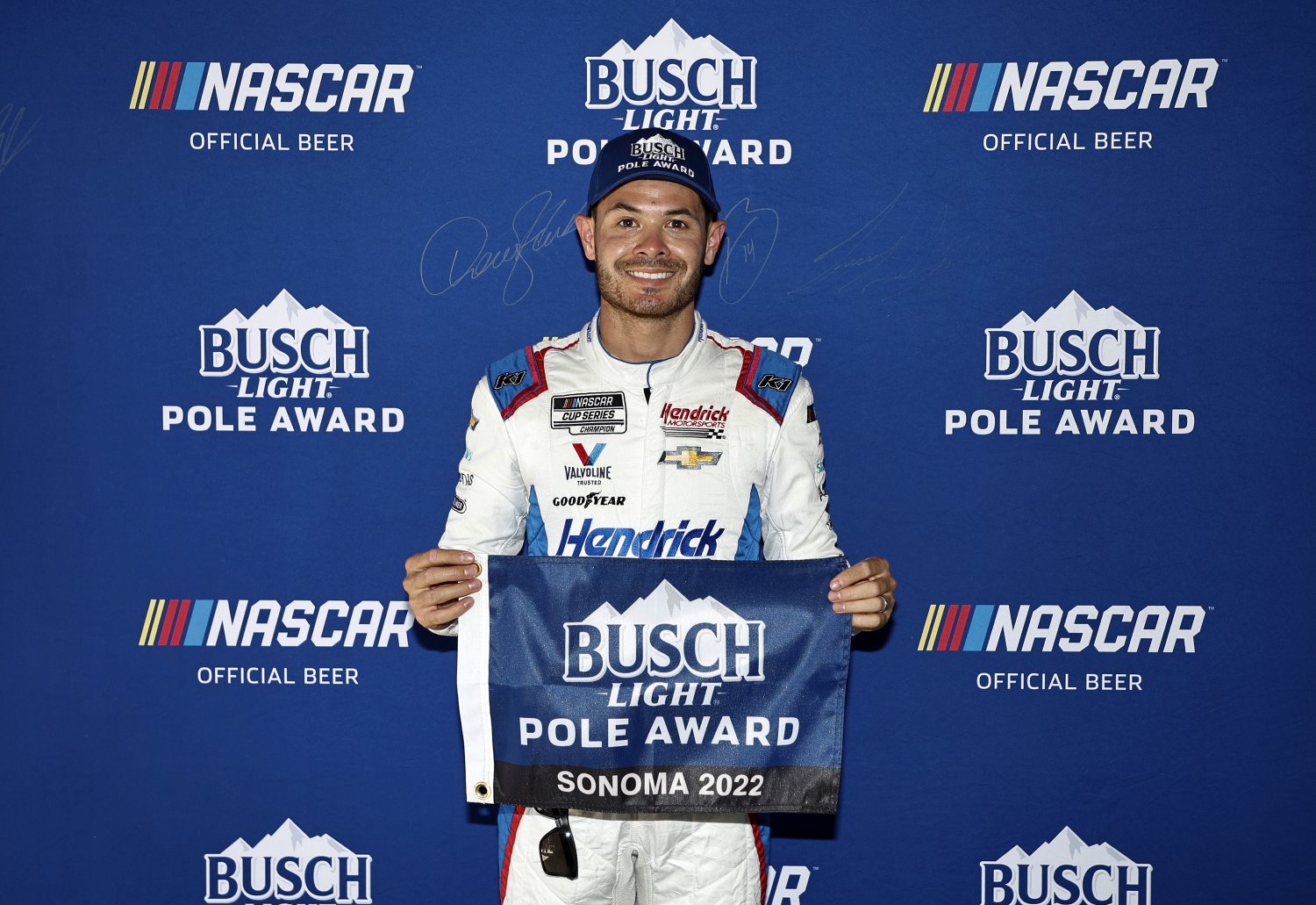 For the third time this season, a Camaro ZL1 will lead the field to the green in Sunday’s NASCAR Cup Series (NCS) Toyota / Save Mart 350 at Sonoma Raceway. After topping the overall speed chart in the series’ practice session, the speed of the No. 5 HendrickCars.com Camaro ZL1 carried over to qualifying, with Kyle Larson putting down a lap of 77.776 seconds, at 92.111 mph, to capture a series-leading fourth pole win at Sonoma Raceway and his 12th-career pole in NASCAR’s premier series.

The most among active drivers at Sonoma Raceway, Larson also now sits second on the all-time pole win list in the series’ history at the track, behind Career Chevrolet driver Jeff Gordon (five poles).

“It was a good lap,” said Larson. “I was a bit surprised that I ran that lap because I feel like I gave up a lot of time in turns four and seven. If I had those two corners back, I feel like I could have gone quite a bit faster. We just have a really good No. 5 HendrickCars.com Chevy. Thank you to everyone on our team and everybody back at the shop and the engine shop. I’m excited about it.”

NO SURPRISE YOU’RE ON THE POLE AGAIN. WALK US THROUGH QUALIFYING FROM YOUR PERSPECTIVE.

“Really, really neat to get another pole here. I think that’s five-consecutive I heard. It’s cool. My car was really good in qualifying trim. I felt like I could have gone quite a bit faster there. On my good lap, I made a pretty big mistake there in turn four. So, I was surprised I ran the lap that I did because it was such a big mistake.

Good to get another pole and I look forward to the race.”

YOU’VE WON FIVE POLES IN A ROW HERE AT SONOMA RACEWAY. HOW NEAT IS IT TO DO THAT AND HOW MUCH MOMENTUM WILL THAT GIVE YOU GOING INTO TOMORROW?

“It gives you confidence in your car, especially for the short run stuff. I feel like we need to work on it a fair bit for race trim stuff. I feel like Chase (Elliott) was really good and Kyle Busch was probably pretty good; at least the guys around me. I just have to look at some data tonight and try and get a little better; and do a better job once the tires start to lose grip.”

DO YOU PREFER THIS LAYOUT OVER THE CAROUSEL; OR DOES IT REALLY MATTER TO YOU?

“I think every driver has their different preferences. I think for me, the other layout works better for me and my driving style. I really struggle in turn seven here. The way that the track was before, turn seven was a little bit different and I felt like that lended itself a little bit better to me. The carousel, being a more traditional, left-hander, was better for me, too.

But it doesn’t matter. We’ve been able to be fast on both layouts, so hopefully tomorrow we can win on this layout.”

OFF WEEK NEXT WEEK. PLANS FOR YOU AND ANY UPDATE ON OWEN’S RACING AFTER HIS INCIDENT?

“I’m going to not be racing. I’m really excited about that to spend time with the family and just hangout.

For Owen, I had to go pickup a new chassis, spindles, radius rods, body parts, wings – basically everything. His car will be ready to go for Tuesday at Millbridge.”

YOU ARE THE REIGNING WINNER AT SONOMA RACEWAY, BUT IT’S A BRAND NEW CAR AND IT’S A DIFFERENT LAYOUT. IS THERE ANYTHING YOU CAN CARRYOVER FROM LAST YEAR THAT WILL HELP YOU THIS WEEKEND OR IS IT COMPLETELY DIFFERENT?

“I don’t think so. My car felt really, really good last year. Our car was just really good compared to the field everywhere we went last year. This year, things are a little bit tougher. Cars are more equal and they seem to be more of a handful here this year than last year’s car. I don’t think there’s much I can take from that, maybe just a little bit of technique and stuff you use to pass people and stuff like that. The cars don’t really drive that similar. There are some areas where it feels normal and then there are other areas where I seem to be struggling a little bit more, which I’m sure everybody is.”

DID YOU FEEL THE CONCRETE THEY PUT DOWN COMING OFF OF TURN FOUR, REMOVING THE CURB COMING OUT OF FOUR – HOW WAS IT?

“Now that it’s not there, I don’t know why we ever had a curb there. It’s so much nicer without it and you kind of use up the same amount of track as you did before. So, it’s just less aggressive on your car, your body and your head bouncing off the head rest.

I love how they did that. It’s got some good grip out there, which is nice. It’s a pretty straight and forward corner.”

HOW DOES COTA HELP YOU FOR THIS WEEKEND? HOW DOES THE CAR HERE FEEL IN RELATION TO COTA?

“That would be a better question for Cliff (Daniels, crew chief). I’m sure the setup is way different, maybe it’s not. The two tracks are totally different – the grip level in them, the elevation, the corners, braking, speed, everything is way different. So, there’s not a whole lot that I can take from it. But like I said, I don’t know what’s different with our car, but I’m sure there’s a fair amount different, as well.”

THIS IS YOUR HOME TRACK. DOES THAT GIVE YOU ANY KIND OF BOOST?

“Once I’m in the car, no I don’t really think about any of that. But I’m sure during the race or before the race starts, I’ll definitely glance around the crowd and see many blue No. 5 shirts there are out there. I know I think in this section right behind us in the grandstands, it’s supposed to be the ‘Kyle Larson section’. I heard there’s supposed to be like thousands of fans with blue shirts, so that should be really cool. I always feel the support when I come home; and now that I’ve had some success, it’s just exploded. It’s been neat and like I said, seeing those stands, hopefully it’s really blue and that will be cool to see.”