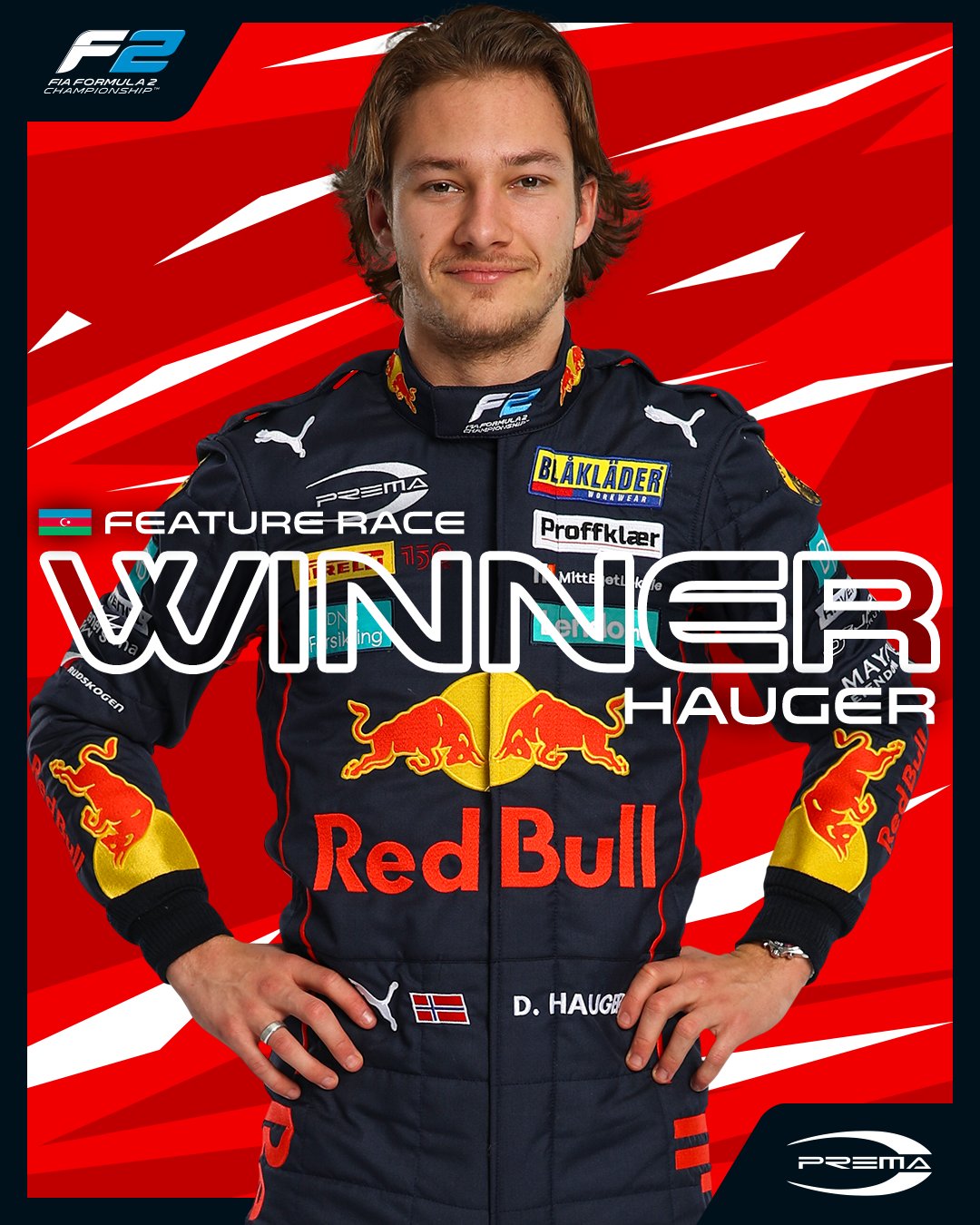 Dennis Hauger claimed his first F2 Feature Race win after a tense battle with Jüri Vips that ended after the Hitech driver crashed out of the race. The pair were battling sector by sector in the closing stages and with just over five minutes remaining, the Hitech Grand Prix man clipped the wall in the castle section, handing the victory to Hauger.

Logan Sargeant completed a measured drive to take second and Championship leader Felipe Drugovich extended his points advantage, finishing third. Jehan Daruvala made it two PREMA Racing cars in the top five followed by Richard Verschoor in fifth. Enzo Fittipaldi kept up his impressive scoring record with sixth place while Frederik Vesti made up for a start-line stall to recover to seventh. Marino Sato, Ralph Boschung and Jake Hughes rounded out the top 10 in a dramatic Baku Feature Race.

Pole-sitter Vips got a great start and comfortably covered off Lawson to seal the lead. Verschoor was aggressive and made a dive down the inside of Drugovich into Turn 2, forcing the Championship leader to play safe and concede the place. His balked momentum left him defending from Daruvala, with the PREMA Racing driver the next to get by, putting Pourchaire right behind his title rival in ninth.

Contact between Amaury Cordeel and Olli Caldwell at Turn 4 brought out the Safety Car soon after. Both were out on the spot, but it was a bonus for Sprint Race winner Frederik Vesti, who had stalled on the grid. He eventually got going from the pit lane and joined the back of the train.

Racing resumed on Lap 5 and Marcus Armstrong was immediately on the attack for P2. Lawson fended off the threat to hold the position as Vips scampered clear at the front. Pourchaire slipped down two places on the restart, losing out to Hughes immediately and later Doohan on the main straight entering Lap 6.

Daruvala and Ayumu Iwasa were in immediately with the pit lane open for stops, switching to the mediums at the first opportunity. On track and with DRS enabled, Lawson was under big pressure from Armstrong, but got his elbows out at Turn 3 to keep the position.

Lawson and Hauger opted to pit as they approached Lap 9, but Carlin were forced to hold the New Zealander stationary as cars filtered past in the fast lane, allowing the PREMA man to gain the place. Vips opted to cover off his closest rivals on the following lap and retained the effective race lead despite a delay fitting the right rear medium tire.

Armstrong was forced to stay out one lap longer with his teammate pitting and was the last of the leaders on the conventional strategy to make a stop on Lap 11. It turned out to be a good move as he re-joined clear of Vips and took the net race lead from the Estonian. It was a temporary gain though as with DRS, Vips breezed by on the following lap into Turn 1.

The Safety Car was back out on Lap 12 following an incident between Roy Nissany and Cem Bölükbasi. The Charouz Racing System driver made a pass into Turn 2 but on exit the pair made wheel-to-wheel contact, sending both into the barriers.

Racing got back underway on Lap 15 with Calan Williams leading the pack on the contra strategy, yet to pit on his mediums. He opted to wait until as late as possible, which caught out several behind him including the two Hitech Grand Prix teammates. Armstrong nosed into the back of Vips, but both somehow made Turn 1 despite the contact. Vips kept second place, but Armstrong dropped down to ninth as others capitalized on his error.

Further back, Pourchaire sustained front wing damage, while Iwasa hit the back of Hughes. Contact between Lawson and Doohan left the New Zealander with a puncture, an incident for which the Virtuosi driver would later be handed a five-second time penalty. The debris from the array of incidents quickly brought out the Virtual Safety Car.

The VSC was withdrawn on Lap 17 with Vips the effective leader in second with Williams still yet to stop. Hauger was pressuring Vips for the de facto lead and the Hitech wasn’t hanging around. With DRS, he attempted a pass on Williams, but the Trident driver locked up into Turn 3 and missed the corner, clearing the way for the fight for first.

Back-to-back fastest laps by Vips on Laps 19 and 20 couldn’t quite break Hauger’s pursuit. The Norwegian was clinging on to the leader, hovering on the edge of DRS range. Hauger kept the pressure up as the pair exchanged fastest sectors lap after lap and it came to a head with six minutes remaining of the race.

Vips clipped the wall in the castle section, pitching him into the barriers and out of the race, promoting the PREMA driver into the lead. As Vips hit the steering wheel in frustration the Safety Car was called back out to recover the Hitech car.

The clear up job took up the remaining time left on the clock and Hauger led the train across the line for his first F2 Feature Race win. Sargeant and Drugovich completed the podium and were followed by Daruvala, Verschoor, Enzo Fittipaldi, Vesti, Marino Sato, Boschung and Hughes.

“Really happy with P1 in the Feature Race. It was a messy one. I tried to put Jüri under pressure a bit, especially at the end just before the crash. He had really good pace so it’s a shame for him but really happy with the win. It’s a good step for me this season. I think we‘re building up which I’m happy with.”