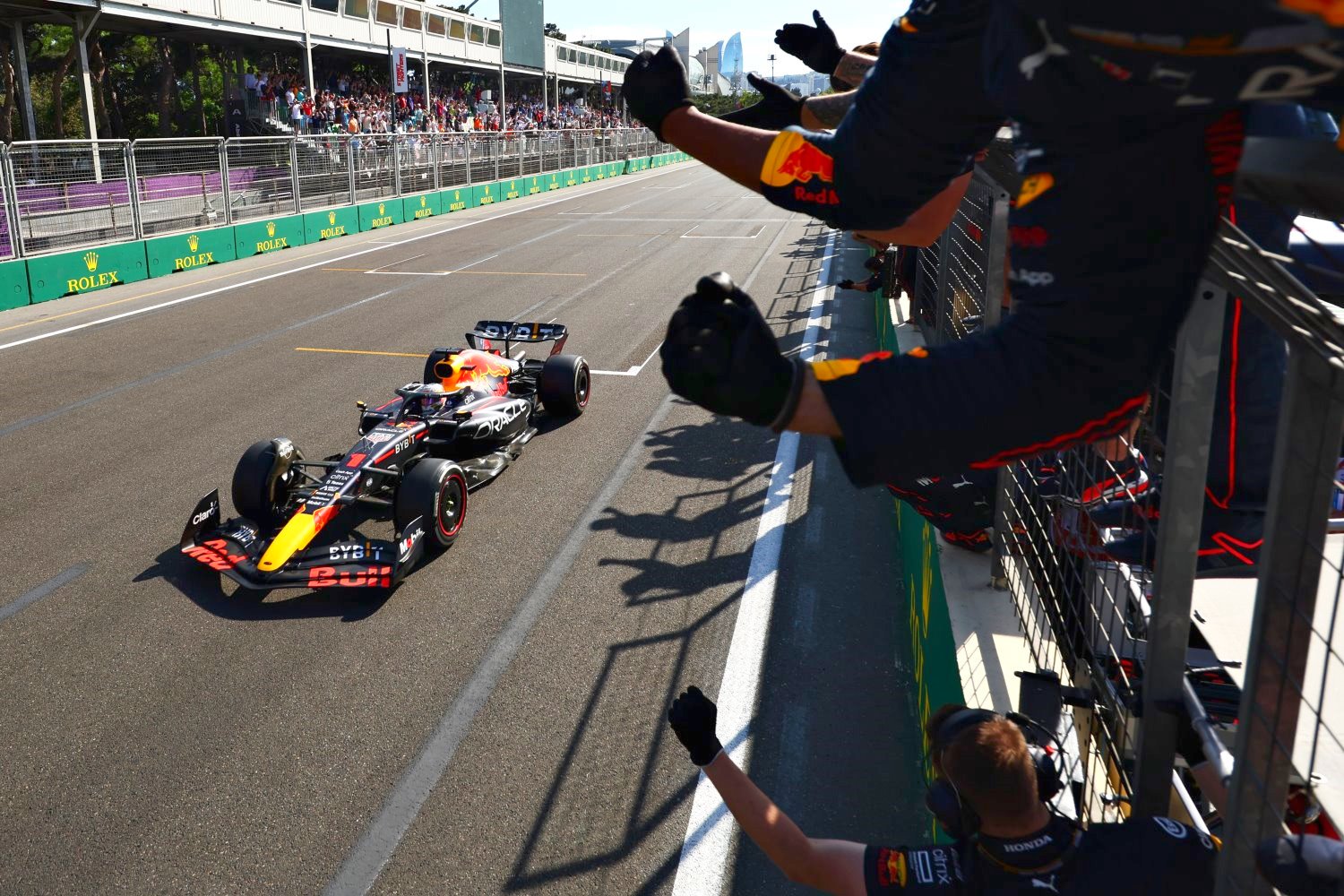 While three Ferrari-powered cars spewed their guts all over the Baku asphalt, the two Red Bulls cruised to an easy 1-2 to win the Azerbaijan GP.

Max Verstappen schooled his Red Bull teammate Sergio Perez and beat him by 21 seconds to stretch his lead in the Drivers Point Chase.

A great day for the Red Bull team, in both the drivers’ and constructors’ championships.

“Today we had incredible pace in the car, we could look after the tires and chip away at it,” said Verstappen.  “A tiny bit lucky with the retirement, but the car was quick today. To have a 1-2 as a team as well, a really good day for us.”

However, Verstappen was confident he could have caught Charles Leclerc when his Formula 1 world title rival was leading the race before the Monegasque’s Ferrari engine failed.

“I think today we had an incredible pace in the car, we could really look after the tyres and we could chip away at it, pass for the lead,” Verstappen said after securing his 25th F1 win over Perez by 20.8 seconds.

“But then, of course also, maybe a tiny bit lucky because with the retirement.

“But I think nevertheless, our car was really good today. So I could have closed that gap. Then of course you have a race on your hands.

“But overall, yeah, really, really happy with how the balance of the car was today.”

Hydraulics did in Carlos Sainz Jr. early on, and Leclerc was forced out with a blown engine while leading.

“Unfortunately, we missed the VSC stop, there was some miscommunication, we were a bit unlucky there,” said Perez. “At the restart, I got too much deg on the medium tire, it was extremely high for me and Max was stronger on that medium stint.”

But it really did not matter, Verstappen was clearly faster than Perez on all the tires. Perez got the fastest lap of the race, but that is because Verstappen was told to stroke it home.

Verstappen now leads the point standings 150 to 129 over Perez, while Leclerc drops to a distance 3rd with 116.

George Russell and Lewis Hamilton were 3rd and 4th for Mercedes, 46 and 71 seconds behind respectively.   In other words, out to lunch and once again Russell easily beating Hamilton.

Hamilton was clearly in severe back pain and was very slow getting out of the car, the bouncing Mercedes wearing on the 7-time champion’s body.

“We’ve got to be there to pick up the pieces, the cars are going through a torrid time with the bouncing so pleased to bring it home in P3,” said Russell.  He clearly was in much better shape after the race than his teammate Hamilton, who walked gingerly away from his car, appearing to be a defeated man.

“Lewis, we all know this is a bit of a shit box to drive at the moment, we will sort ourselves out,” was the radio message from his boss Toto Wolff.

Pierre Gasly finished a distant 5th for Alpha Tauri ahead of Sebastian Vettel in 6th for Aston Martin and Fernando Alonso 7th for Alpine.

Daniel Ricciardo finished just ahead of his McLaren teammate Lando Norris, and Esteban Ocon rounded out the points.

When the lights went out for the start, Leclerc got away well, but Pérez’s start was fractionally quicker, and as they reached the end of the short run to Turn 1, the Red Bull driver was able to steal the lead though the corner.

Verstappen slotted into P3 ahead of Sainz and behind the leading quartet, Mercedes’ George Russell held fifth ahead of AlphaTauri’s Pierre Gasly and the second Mercedes of Lewis Hamilton.

At the front, Pérez quickly began to carve out a gap and by the end of the fourth lap he was 2.2s clear of Leclerc, who had Verstappen in his mirrors. At the start of the next tour Verstappen, aided by DRS, closed in on the Ferrari driver, but Leclerc defended well to keep the Red Bull driver at bay.

On lap nine, Sainz suddenly lost power and was forced to take the escape road at Turn 4. The Spaniard tried to resume but it quickly became clear that his race was run due to what Ferrari later confirmed as a hydraulic issue.

The Virtual Safety Car was deployed and under the caution Ferrari pitted Leclerc. The Monegasque driver’s switch to hard tires was delayed by a stuck front jack and with Red Bull choosing to stay on track, Leclerc rejoined in third place, just under 13 seconds behind Verstappen who was now second and 2.0s behind Pérez.

Behind the leaders Russell, Gasly, Aston Martin’s Sebastian Vettel, Hamilton and Alpine’s Yuki Tsunoda all pitted for hard tires. Vettel, who had passed Hamilton in the pit stops, locked up while overtaking Alpine’s Esteban Ocon and dropped to 12th place. That left the order behind the leaders as Russell in fourth place after his stop, followed by Alpine’s Fernando Alonso, the McLarens of Lando Norris and Daniel Ricciardo and Gasly, all of whom needed to make a pit stop.

On lap 15, Verstappen closed on Pérez and with DRS made his move past his team-mate to take the race lead. Behind them Leclerc was closing in, running a second quicker than the Red Bulls and by lap 16 the Ferrari driver was 7.9s behind Pérez.

Pérez pitted at the end of lap 16 for his switch to hard tires, but like Leclerc, he too suffered a slow pit stop, this time caused by a problem with the gantry lights. Leclerc swept past and the Mexican rejoined in third place, just ahead of Russell. Verstappen made his pit stop at the end of lap 18 and after taking on hard tires he rejoined behind Leclerc who now led by 13.6s.

On lap 20, the shape of the race changed completely. A plume of smoke suddenly bloomed from the back of Leclerc’s car and the Ferrari driver was forced to retire from the race. Verstappen retook the lead, 5.2s ahead of Pérez.

Further back, Gasly was hunting down Ricciardo and on lap 21, with the benefit of DRS, the AlphaTauri man powered past the McLaren driver to steal fourth place. Behind Ricciardo, Hamilton was now sixth ahead of Tsunoda, Ocon, Vettel and Haas’ Kevin Magnussen. Ricciardo, still on starting hard tires, then lost fifth to Hamilton. At the front, Verstappen began to pull away from his team-mate and on lap 28 he was more than seven seconds clear of Pérez, who had settled into second place 13.6s ahead of Russell.

On lap 33, Magnussen pulled over at the side of the track as his Ferrari power unit expired and the Virtual Safety Car was deployed for the second time in the race. Red Bull took the opportunity to pit both its drivers for more hard tires. Russell, too, took on fresh tires but Gasly stayed out. The French driver soon began to struggle for grip on his aging hard tires. And after a couple of rebuffed attempts, Hamilton swept past the Frenchman on lap 44.

In the final laps the order settled and after 51 laps Verstappen crossed the line to take his 25th career win. Behind him, Pérez took his fifth podium finish of the year to seal the one-two for Red Bull. The Mexican also grabbed the extra point on offer for fastest lap. The final podium place went to Russell, who scored his third P3 finish of the season.

Behind them, Hamilton finished fourth ahead of Gasly, while Vettel secured his best finish of the season to date with sixth place. Alonso finished seventh ahead of the twin McLarens of Norris and Ricciardo and the final point on offer went to Ocon.

Note: With only 78,000 fans in attendance over three days, this race has one of the lowest attendance records on the F1 calendar. With such demand for F1 races around the world, can Azerbaijan remain on the calendar much longer?  The race was impacted by Covid the last two years, the race Executive Director was happy with the turnout.

Commenting after the Grand Prix had concluded, BCC’s Executive Director Arif Rahimov was in celebratory mood: “We are thrilled to have welcomed F1 – and most importantly the fans – back to Baku this year for another wonderful weekend. Seeing so many people on the grandstands and in our Fanzone after 3 long years was an incredible feeling. The weekend had it all, action, drama, excitement and, of course, a new winner in Baku! We now look forward to building on this year’s success to deliver an even bigger and better race in 2023! See you all then!”