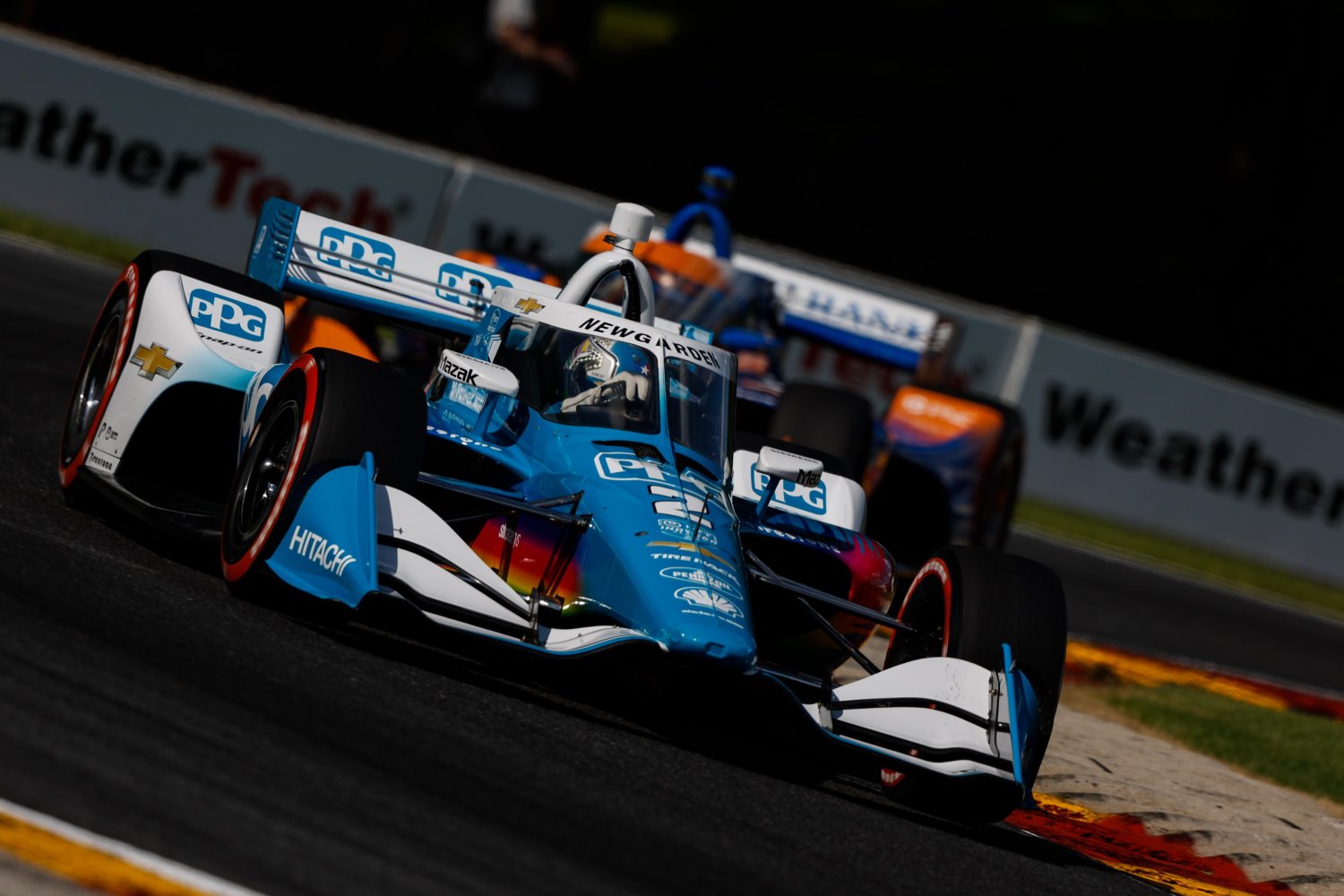 Alexander Rossi won the pole on Saturday for the Sonsio Road America GP IndyCar race, but when the race was on the line, outside polesitter Josef Newgarden had too much talent for the Californian and schooled him.

On the final restart, Rossi was right on Newgarden’s tail, but when the green flew Newgarden walked away from the #27 Andretti driver, the teacher schooling his student.

Newgarden led a race-high 26 of 55 laps, taking the top spot for good during rivals’ pit stops on Lap 43.

“I was just trying to stay focused on what I had to do,” Newgarden said. “Just an unbelievable job by everybody at Team Penske.”

Indy 500 winner Marcus Ericsson also schooled Rossi and passed him in Turn 1 on that same restart, and then gapped Rossi to finish 2nd.

The runner-up finish for Ericsson came despite contact with teammate and reigning series champion Palou while racing for third in Turn 5 on Lap 4. Palou finished 27th in the No. 10 The American Legion Honda.

“First of all, I’m really sorry,” Ericsson said. “You never want to have contact with a teammate. From my point of view, the door was open, and I was already side by side. If you see a gap, you go for it. It’s important at the beginning of the race to get track position.

“It was a really good race, and we had a really strong weekend. Super happy with P2.”

“I tried to be really aggressive on that last restart, and it cost us,” Rossi said. “But we were trying to win the race. But ultimately a good day. Josef certainly had a little better base than us, and it took us until the last stint to dial in the balance of the car.

“We were coming back on him pretty quickly. I don’t think we could have beat him, but all in all, it was a good day.”

The 2022 Indy 500 winner commented on his race day. “Yeah, it was a really good race for
us. We were strong all weekend. I think the race was pretty straightforward. Pretty good
from our side. Obviously a lot of cautions that got you out of rhythm. ”

“Got some opportunities there in the end to try and get a better position. Alex had a bit of a slide out of the last corner so I got a run on him and managed to get by.”

“Overall good day. P2 is a really good result for the championship, back in the lead. Super happy. The team did a really good job on pit stop strategy, so really thankful to the No. 8 Huski Chocolate Honda Ganassi crew.”

Ericsson is now leading the championship points after some of the front runners not having a finish today.  The Swede commented about leading the points right now.

“Like we talked about, it’s so competitive in the series at the moment. Any given weekend can be a new winner. It’s hard to be even in the top 10 if you don’t get everything right.”

“I think it’s going to be a tough season, a long season. We put ourselves in a really good position now, leading. So we just got to keep doing what we’ve been doing. The last 12
months we were the top scorer in the championship. I think that says something about where we’ve been performing since Detroit last year.”

“But, yeah, like we said, the points race is going to swing a couple more times. It’s a matter of being consistent now, bringing home the results. Today P2 was definitely a very good result for us with the way the race played out.” 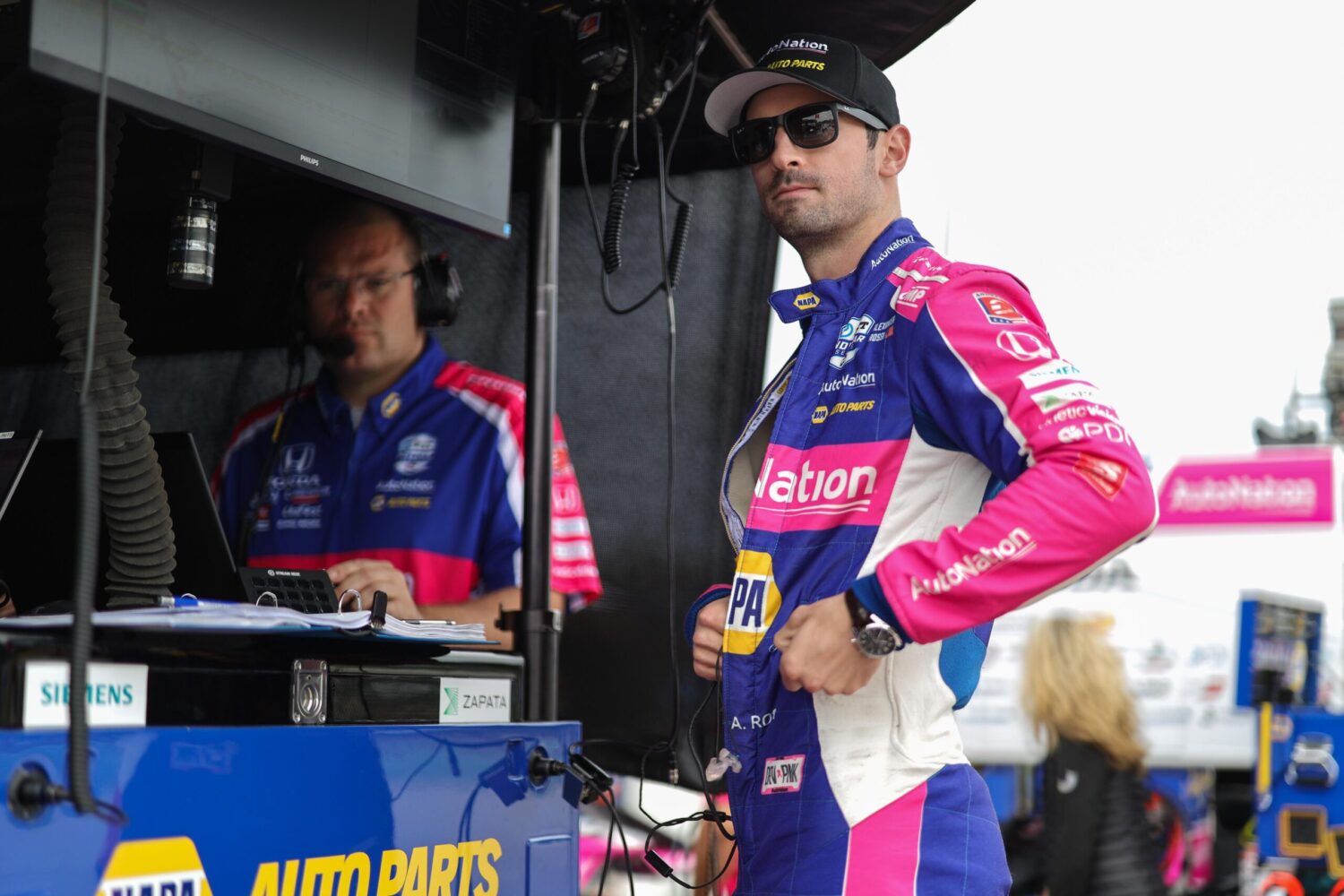 “Yeah, probably a little disappointing when you start on pole and can’t convert. It was generally a good day I think. I think Josef had a little bit better pace than us. I think we were the second best car.”

Pretty aggressive on the restart there to try and do something. Just kind of overstepped a little bit. That’s what allowed Marcus to get by.”

“Ultimately I don’t know that we would have been able to win. Got held up with Scott McLaughlin a little bit coming into the pits when we were trying to leave on the first
sequence. With the lap cars, Josef was the first to get to him. From there on it was trying to close the gap that got started there.””

“A little disappointing, but all in all I think it was a very positive weekend for us for obvious reasons. A good run of races, look forward to going to Mid-Ohio.”

Newgarden won a $1 million bonus for completing the PeopleReady Force for Good Challenge as the first driver to win on all three types of tracks IndyCar races on.  The American won on the oval at Texas Motor Speedway and the street circuit at Long Beach before his win today at Road America.The $1 million will be split between Newgarden and Team Penske, and the two charities of Newgarden’s choice – Wags and Walks of Nashville and SeriousFun Children’s Network.

The PeopleReady Force for Good Challenge is part of a new partnership between industrial staffing giant PeopleReady and INDYCAR. It will continue to award a $10,000 donation to every race winner for the remainder of the season – split between the driver, their team, and their charity of choice.