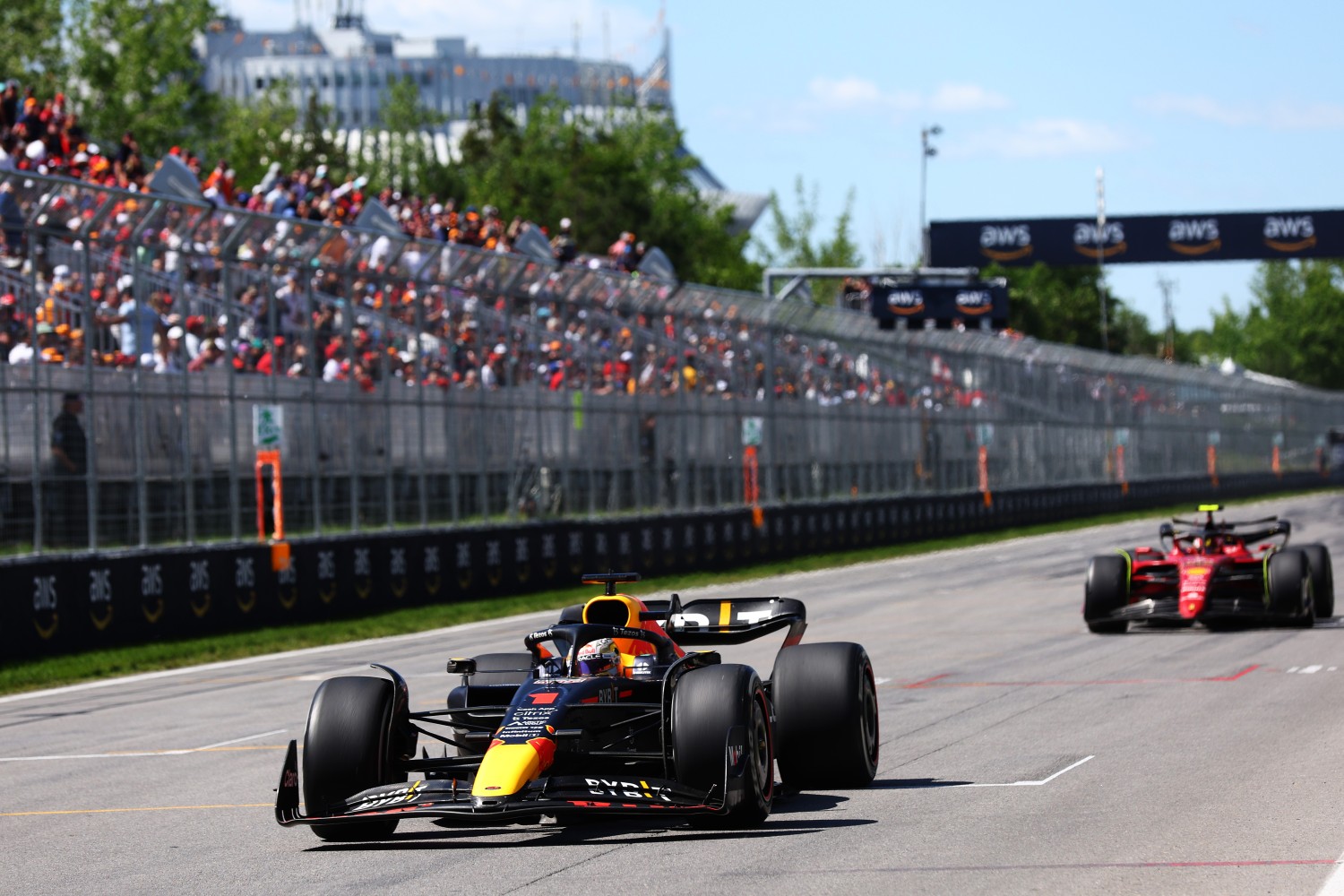 Defending F1 World Champion and current points leader, Max Verstappen, had Carlos Sainz Jr. all over his tail when the green flew with 15 laps to go, and they battled hard lap after lap, but Verstappen had just enough pace in his #1 Red Bull to hold off the #55 Ferrari to the end.

When Yuki Tsunoda crashed exiting the pits, the safety car had to be deployed that closed all the cars up on Verstappen’s tail. The green flew with 15 laps to go, and the race was on.

Sainz, on newer tires, try as he might, just came up short by 0.993s, but he did manage to get the one point for fastest lap.

The Dutchman just didn’t make any mistakes out there, under extreme pressure from the Ferrari of Sainz. He picks up his sixth win of the season in nine races, and his first win in Canada and he extends his point lead over 2nd place Sergio Perez to 26 points.

As it is, he has extended his lead thanks to his teammate’s early DNF. This one is all coming together for Verstappen, but Ferrari will be relieved that Sainz at least picked up good points for the constructors’ out there.

“The Safety Car didn’t help, overall [Ferrari] were very quick,” said Verstappen. “Following is tricky around here, but I could see him pushing, charging, pushing, charging. The last few laps were a lot of fun.”

“I was pushing flat out, I wasn’t leaving any inch to the walls under braking. I tried everything to pass Max, but the positive thing is we were quicker, we were faster in the race. We were very close to winning today, so I’ll take the positives,” said Sainz..

Lewis Hamilton, who always runs well here, drove his best race of the year to take the final podium position, 7-seconds behind.

“We’ve had such an awesome crowd, and it’s quite overwhelming to get this third place,” said a jubilant Hamilton. “We remain vigilant, never give up, and it’s something I’m inspired by. We’re getting closer. I could just about see them [the front-runners] at the end! Honestly, I’m ecstatic.”

George Russell in the #63 Mercedes came home 4th to keep his run of top five finishes this season intact.

Charles Leclerc came from last on the grid in his #16 Ferrari to round out the top-5.

The Alpines of Esteban Ocon and Fernando Alonso were 6th and 7th.

Horner confirmed that strategy-wise, it really wasn’t clear what to do out there with the timing of the two VSC periods plus the late Safety Car. But they got the victory, so even though it might not have been the original plan, their strategy worked.

“Max just couldn’t break the DRS – the Ferrari was quick in a straight line. But not a single mistake, we lost communication with the car, but I guess he didn’t need to talk to us. All credit to Carlos, he pushed him really hard.”

As for Mercedes, are they back in the fight? They still looked a few tenths short of outright pace of the top two teams, but were comfortably ahead of the rest of the field.

“They were both (Russell and Hamilton) very good, they had different rear wing set-ups, George opted for more downforce yesterday in the rain,” said Toto Wolff. “In terms of performance, at various points in the race they were quick. Before the Safety Car came out, we were quicker than Sainz.”

At the race start, the field got away cleanly and at the front of the grid Verstappen powered into the lead ahead of Alonso. Sainz held third ahead of Hamilton who resisted heavy pressure from Haas’ Kevin Magnussen. Further back, Pérez also made a good start and he quickly rose to P11 ahead of  Williams’ Alex Albon.

At the front, Verstappen quickly began to carve out a gap and by lap three the Dutchman was almost three seconds clear of Alonso who was holding off Sainz. However, when DRS was enabled, the Ferrari driver used the speed boost to pass Alonso on the run to the final chicane. Elsewhere, Magnussen, who had sustained front wing damage at the start, was shown black and orange flags on lap 7 and he pitted to have the wing changed.

On the next lap, Pérez’s race came to an end when he suddenly slowed on the approach to Turn 8 and he ground to a halt in the run-off area. The Virtual Safety Car was deployed and Verstappen immediately headed for the pit lane for hard tyres. He emerged in third place behind new leader Sainz, and second-placed Alonso.

The VSC period finished at the end of lap 10 with Verstappen in third place, 6.5s behind Sainz and 4.0s off Alonso. Mercedes’ George Russell held fourth place while the Briton’s team-mate, Lewis Hamilton, who also chose to pit under the caution, was soon past Alpine’s Esteban Ocon to take fifth. Further back, Ferrari’s Charles Leclerc had climbed to 13thplace after starting from P19 on the grid. At the end of lap 13 he passed McLaren’s Lando Norris and set off after Alfa Romeo’s Valtteri Bottas, who had the benefit of DRS from 10th-placed Albon.

On lap 20 Mick Schumacher stopped in the run-off area in the same spot where Pérez had retired and the VSC was again deployed. That gave Sainz and Russell the chance to make a pit stop and both took on hard tyres. Alonso, though, stayed out on track and he took second place, 7.7s behind Verstappen.

Leclerc, still on his starting hard tyres, also stayed out during the VSC and on lap 22 he found himself in seventh place. Sainz, meanwhile, passed Alonso to once again take second place and the Alpine driver was also then passed by Hamilton.

As the race reached the halfway mark, Verstappen led Sainz by eight seconds, though the Dutchman was complaining that he was beginning to struggle for grip on his hard tyres. On lap 37, Sainz, whose tyres were 10 laps newer, closed the gap to 7.4s, while Hamilton continued in third place, 10s behind the Spaniard and nine ahead of Russell. Further back Alonso began to close on sixth-placed Leclerc who was complaining that he had no rear-end grip and couldn’t mount a challenge on fifth-placed Ocon. The Ferrari driver elected to pit at the end of lap 41 but the stop was hampered by a problem with the rear left. He rejoined in 12th place, behind  McLaren’s Daniel Ricciardo.

Leclerc, on new tyres, now began to claw his way through the pack and he soon climbed to P8. On lap 49 AlphaTauri’s Yuki Tsunoda lost control into Turn 2 and slid into the barriers. The Safety Car was deployed and Sainz took advantage of the caution to make a second pit stop. Verstappen retook the lead behind the SC and Sainz soon closed up to the Red Bull to prepare for a fight to the finish. Behind the Spaniard, Hamilton and Russell held third ahead of Ocon and Alonso and Leclerc was seventh ahead of Bottas, Vettel and Zhou.

The Safety Car left the track at the end of lap 54. Verstappen controlled the re-start perfectly and he held his lead ahead of Sainz and Hamilton. Sainz put in the fastest lap of the race on lap 56 to stay within a second of Verstappen and on lap 57 DRS was enabled. At the end of the lap the Spaniard closed in but Verstappen defended well to keep the Ferrari driver at bay. Leclerc then made a great move past Alonso in the hairpin to split the Alpine drivers and claim P6. He then put the same move on Ocon to claim fifth place.

At the front Verstappen upped his pace marginally and he began to eke out a tiny margin of comfort to Sainz and he was able to steady the gap at a little over half a second. Sainz pressed hard and there was no room for error but after 70 laps, the Dutchman crossed the line nine tenths of a second ahead of the Ferrari to take his 26th career win and his sixth win of the season. Sainz was left with second place and Hamilton took his second podium finish of the campaign with third place. Russell finished fourth ahead of Leclerc and Ocon and Alonso were fifth and sixth respectively. Bottas finished seventh for Alfa Romeo, ahead of team-mate Zhou and the final point on offer went to local hero Lance Stroll of Aston Martin.

Verstappen’s first win in Montreal means he now has a commanding 46-point championship lead over Pérez, whose DNF leaves him second, on 129 points. Leclerc’s fifth-place puts him on 126 points. In the Constructors’ Championship the team now has 304 points, 76 clear of Ferrari who have 228 points.

Note: Fernando Alonso has been demoted to ninth place at the Formula 1 Canadian Grand Prix after receiving a five-second penalty for some overly zealous late-race defending.