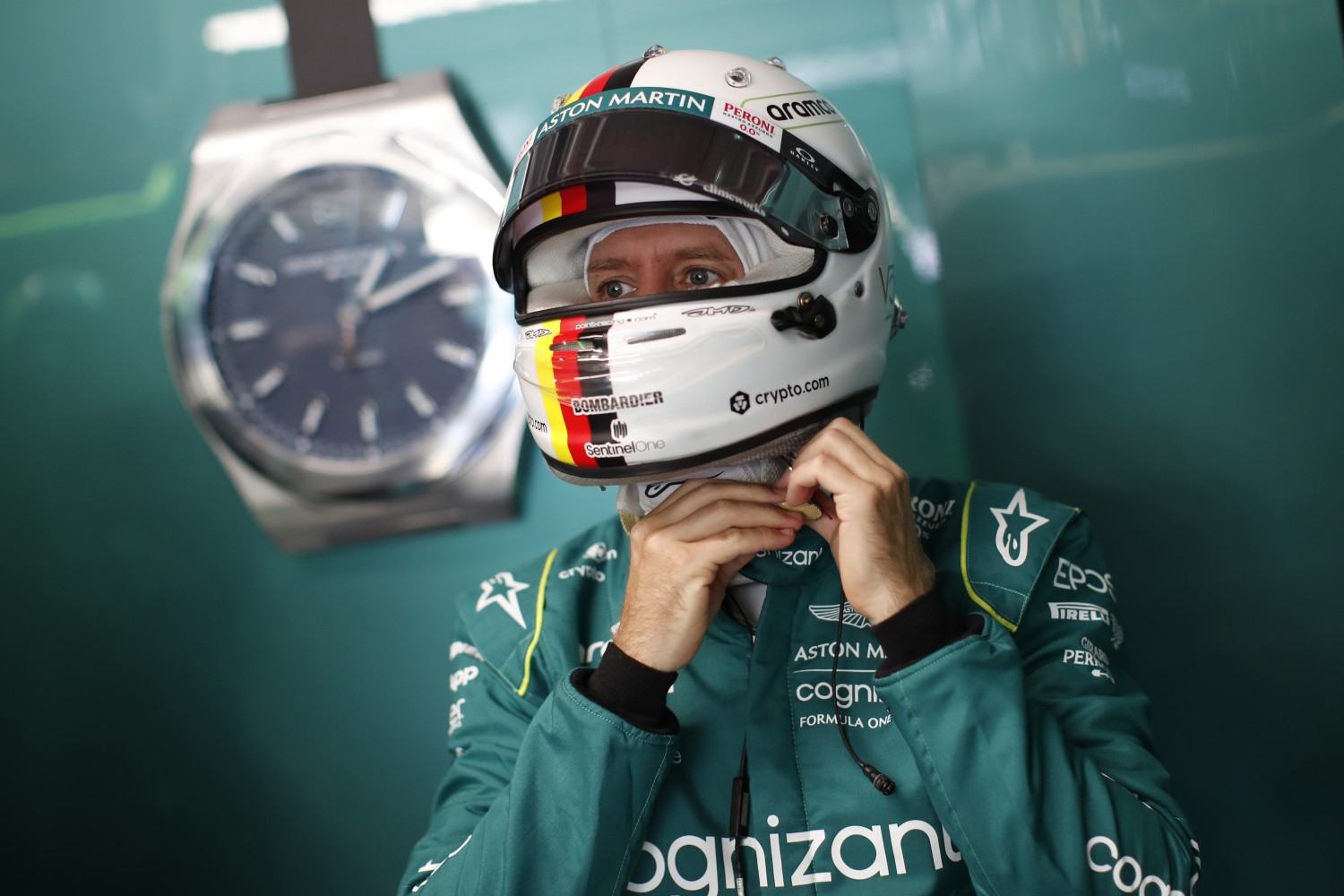 This was the original helmet Sebastian Vettel showed up in Canada with.

That met with a media barrage calling for Vettel to quit racing immediately.

“If Sebastian Vettel really thinks Alberta’s oil and gas sector is a “climate crime” then so is his day job as an F1 racer. He needs to stop being a hypocrite and quit racing. Right now,” wrote the Toronto Sun.

“We’re getting more than a little tired of wealthy celebrities flying in to denounce our oil and gas sector. They’re hypocrites, the whole darn lot of them.

“But Vettel takes things to a whole new level. The guy burns up way more emissions than a regular person. In fact, it’s literally all he does. Formula One is a very gas-guzzling activity, and Vettel drives cars in a circle all day.

“I have seen a lot of hypocrisy over the years, but this one takes the cake,” Alberta Energy Minister Sonya Savage tweeted in response to Vettel.

” Time for the hypocrite Vettel to either drop the insults or drop his job.”

Rex Murphy of the National Post wrote, “Hypocrisy, your name is Sebastian Vettel”

“Mr. Vettel is just a man who loves to ride around at astonishing speeds in multimillion-dollar machines, which chug those dear old fossil fuels by the whale-load, in front of thousands of people who drive to his venues just to watch him. And he has illustrious associations, being sponsored by Aston Martin, with financing from Saudi Aramco, the world’s largest oil producer.

“And simultaneously Vettel is a fervid evangelist against the discovery and production of … oil and gas. Without either of which his miracle of a machine would be little more than a very colorful jigsaw of metal and carbon fiber on exhibit in some mall parking lot.”

(GMM) Sebastian Vettel on Sunday was in no mood for questions about his suddenly-missing “climate crime” helmet.

Earlier in Montreal, the quadruple world champion was slammed by Alberta’s energy minister Sonya Savage after Vettel blasted the mining of “tar sands”.

He had ridden a rainbow-colored bicycle into the Circuit Gilles Villeneuve paddock with a custom-made t-shirt blasting “Canada’s climate crime”.

Vettel, 34, then practiced and qualified with a corresponding helmet that told Canada to “stop mining tar sands”.

Minister Savage accused the German of hypocrisy as a gas-guzzling Formula 1 driver “with financing from Saudi Aramco”, a company “with the largest daily oil production of all companies in the world”.

“It is reputed to be the single largest contributor to global carbon emissions, of any company, since 1965,” she added.

Suddenly, and without explanation, Vettel reverted to his usual white helmet with German colors for Sunday’s Canadian GP.

When asked about that by the German broadcaster RTL, the Aston Martin driver answered: “Are there any other questions?”

Vettel also told Sky Deutschland: “I don’t want to say anything about that now but I always have more than one helmet.”

Aston Martin boss Mike Krack denied that Vettel had been ordered to drop the offending helmet.

“He wanted to use the helmet and the t-shirt to draw attention to the topic,” he said. “At some point he decided that the attention had been drawn.

“Like you and me, he doesn’t wear the same t-shirt every day,” Krack laughed.

“You’ve seen in the past that such campaigns mainly take place on Friday and Saturday, but of course he’s free to make his own decisions. He’s a free man.”

Vettel, meanwhile, hit out at Minister Savage for making his climate activism “personal”.

“I’m a little bit disappointed that politicians to go the personal level because this is not about me, not at all. It’s about the bigger picture,” said Vettel.

“Yes, I am a hypocrite doing what I do for a living or doing what I love, but there are solutions for the future to make it more sustainable.”