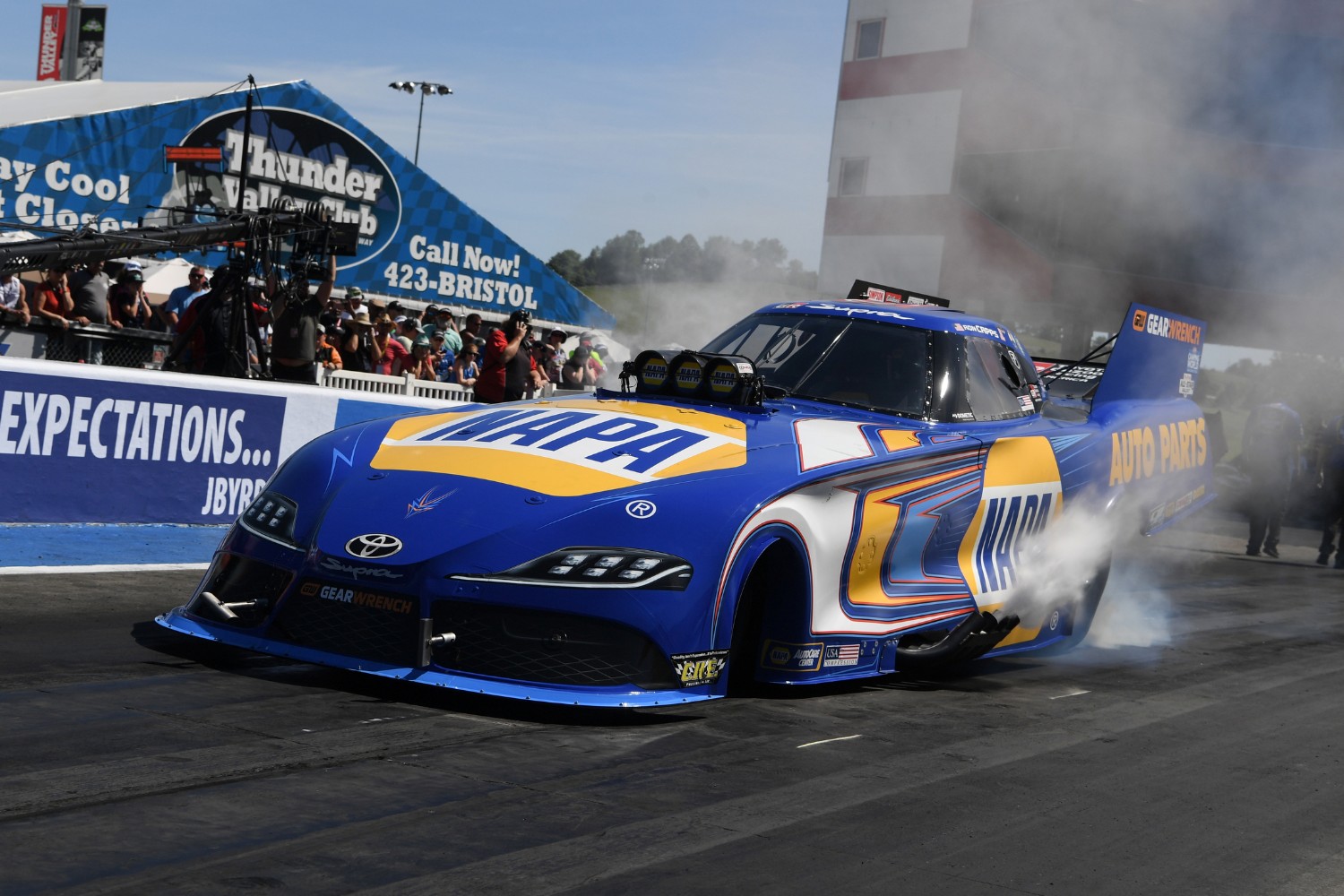 Aaron Stanfield defeated Erica Enders in one of the craziest final rounds in the history of the Pro Stock class while Justin Ashley, Ron Capps, and Jerry Savoie also scored wins at the Thunder Valley Nationals at historic Bristol Dragway.

Stanfield and Enders had arguably the two best cars in the Pro Stock class but the final round was anything but a display of horsepower. After an even start, Stanfield shook the tires, appearing to send Enders to her fourth straight victory.

The engine in Enders’ Melling/Elite Camaro turned sour, pouring volumes of smoke out the exhaust. Enders stayed in the throttle while Stanfield quickly stuffed his J3 Energy Camaro back into gear to begin a pursuit. It wasn’t pretty, but Stanfield ultimately won with an 8.033 to Enders’ 8.801 elapsed time.  The win stopped Enders’ win streak at 14 rounds, dating back to the Gatornationals in March.

“As a team we did a good job today,” said Stanfield. “I cut it loose, and it shook at the top of low gear, so I stopped. Then, I could see smoke out of her car and Big Al [Lindsey, crewman] was on the radio telling me to go, go, go. I stuck it back in gear and tried to get there. It for sure did not go according to plan. Sometimes it goes like that.

“We haven’t had the best luck from the No. 1 spot,” Stanfield said. “We thought about flying under the radar and not going for the poll because it’s been bad luck for us in the past. This is the best gift I can give my dad [Greg] on Father’s Day. My dad and I love being here in Bristol.”

Stanfield qualified in the top spot with a 6.638 and made consistent runs on race day as he topped Wally Stroupe, Fernando Cuadra Jr., and Kyle Koretsky. The race against Koretsky was perhaps the most competitive round of the day with Stanfield taking a 6.63 to 6.69 victory.

Despite the loss, Enders now has a 19-3 record in elimination rounds and she’s still the runaway leader in the points battle with a near triple-digit lead over Stanfield, who remains solidly in second place.

Ashley opened the season with a victory in Pomona and also went to finals in Houston and Epping. The former rookie of the year picked up career win No. 4 when he defeated Shawn Langdon in the final round. Closing the event with a thrilling side-by-side race, Ashley nosed ahead for a 3.813 to 3.841 victory.

“Happy Father’s Day to all the dad’s out there that make this possible,” said Ashley. “[Crew chiefs] Tommy DeLago and Mike Green did such a good job all day. We’re very privileged and blessed to be here.”

“This Bristol track has so much history,” Ashley said. “When you look up and see all the famous names [in the Legends of Thunder Valley]. It’s impressive. Beating Steve [Torrence] in semi’s was great. I have a lot of respect for Steve and a lot of respect for that team. I was fortunate to collect the win.”

Ashley admittedly struggled in qualifying. In fact, his No. 14 starting spot was one of the worst of his career but the Phillips Connect team made the necessary adjustments on Sunday to get to the winner’s circle.

Coming off a frustrating final round loss to Mike Salinas in the Epping final, Ashley survived a tough battle in round one when he topped Josh Hart, 3.824 to 3.827. He then topped Doug Foley and reigning champ Steve Torrence to reach the final round. Against Torrence, Ashley was particularly impressive with a 3.816 that was one of the best runs of the day.

For Langdon, the news wasn’t all bad as he won the Super Comp title in Bristol. The runner-up also represented a huge improvement for the DHL team that had only been to the semifinals once in eight previous events this season.

Capps’ drive to his 70th victory seemed unlikely in round one after he suffered a body-destroying explosion in his victory against Paul Lee. The NAPA team, led by Dean “Guido” Antonelli and John Medlen, quickly regrouped made the necessary adjustments and Capps rallied with an outstanding performance that culminated with a 3.984 to 4.075 win against Tim Wilkerson in the final.

Entering his first year as a team owner, Capps likely didn’t imagine that he’d visit the winner’s circle twice in the first nine races of the year. The reigning world champ also continued to apply the pressure to Matt Hagan and Robert Hight, who had been threatening to make the points battle a two-horse race. Capps has other ideas.

“We qualified No. 9, which was not our best by a longshot, Capps said. “It was on a good run in Q3 and the chutes came out. That was a lucky break. It could have happened in the first round and we would have been dust. Then in round one, I tried to drive the wheels off it. Right when I stepped off the gas, it went boom. All the safety work from Toyota paid off because we had minimal damage. It could have been a lot worse.”

“To run 3.98 in the final was unbelievable,” Capps said. “This is a very demanding track every time we come here. I think this is like NASCAR and their [Southern 500] in Darlington. It’s hot, humid, and demanding. You can’t take your mind off it for a second.”

After changing bodies, Capps took out Robert Hight with a 4.031 and then improved to a 4.016 in his semifinal win against Alexis DeJoria. Capps’ 3.984 in the final was the only three-second run of the day in Funny Car, largely due to the warm temperatures and the altitude of the Bristol Dragway track.

Jerry Savoie almost didn’t make the Pro Stock Motorcycle final after wounding an engine in the semifinals but the White Alligator team thrashed hard. They elected to replace their four-valve engine with their older two-valve combination and Savoie was rewarded with the 14th win of his career after opponent Angelle Sampey red-lighted. The final numbers included a 6.909 for Sampey and a 6.929 for Savoie.

“We blew up the engine in the third round and thanks to NHRA and Vance & Hines for waiting on us,” said Savoie, who was forced to miss the most recent event in Richmond after breaking a toe. “I usually don’t let things get to me and I put my faith in my crew, who did a motor swap in 32 minutes.”

Savoie has been known to get emotional after wins (and losses) and this race was no exception, since it landed on Father’s Day.

“This is for my dad, Blue, who we lost years ago,” Savoie said. “His blood runs through my veins and gives me the need for speed. I’m 63 and to be out here running with all these youngsters and pretty girls is amazing. I just wanted to win one race and now I’ve got 14 and a championship I’ve been blessed. This was an awesome weekend and I don’t think I could ask for anything more. I said I wouldn’t cry but I’ll be damned if I didn’t get down there and cry.”