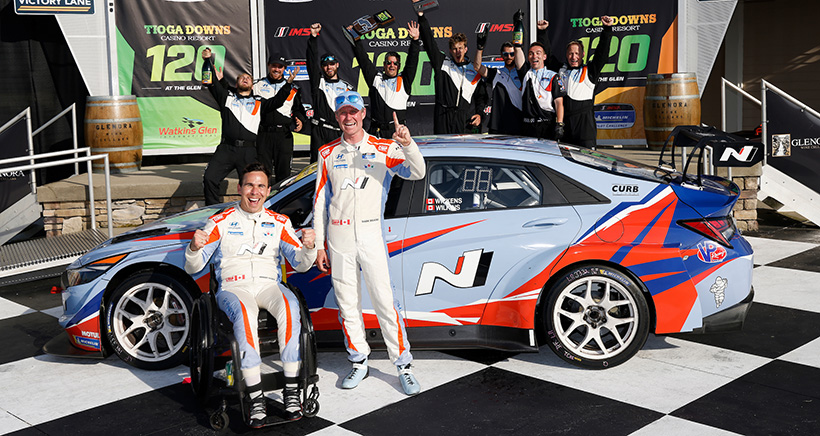 The excitement and emotion were palpable. Yet Canadian racer Robert Wickens delivered the ultimate of understatements following the victory drive he and co-driver Mark Wilkins put together in the Touring Car (TCR) class of the Tioga Downs Casino Resort 120 IMSA Michelin Pilot Challenge race at Watkins Glen International on Saturday.

Most would argue, “pretty good … pretty doggone good!” The win for the No. 33 Bryan Herta Autosport with Curb-Agajanian Hyundai Elantra N TCR marked the first for Wickens since he began racing full time again this season – the first triumph since he suffered major spinal cord injuries in a 2018 crash while competing in the IndyCar Series.

Wickens, a paraplegic who uses a specially constructed steering wheel to steer as well as control the brakes and throttle, drove the No. 33 Hyundai for the first half of the two-hour race – moving from his third-place qualifying effort into the class lead for the final 10 laps of his stint behind the wheel.

Fellow Canadian Wilkins took the driver’s seat for the final hour and quickly made his way forward from the pit stop – ultimately holding off a hard-charging Tim Lewis in the No. 5 KMW Motorsports with TMR Engineering Alfa Romeo Giulietta Veloce TCR by a mere 0.374 seconds. Bryan Herta Autosport drivers A.J. Muss and Ryan Norman finished third in the No. 2 Elantra.

Intently watching the final laps of the race on a mobile device from the No. 33 pit, Wickens didn’t offer any emotion until the checkered flag. His roll down pit lane afterward was interrupted dozens of times by congratulatory wishes, pats on the back, hugs and handshakes.

“The closing laps were a bit stressful because all I could do was just trust Mark and watch him do his thing, and that’s exactly what he did,’’ Wickens said. “He couldn’t make a slip-up and he didn’t. It was such an awesome day.”

After the trophy presentation and spray of champagne on the podium, Wickens smiled and conceded, “It means a lot, but I don’t think it’s really sunken in. I’m not much of an emotional guy. I was just trying to have my moment to myself.

“It was great, though,’’ he continued. “Really, start to finish, this was by far our most complete race we’ve done. So, to get rewarded at the end with a victory was the cherry on top.’’

The win was the sixth of Wilkins’ IMSA Michelin Pilot Challenge career. The best finish for the drivers together before Saturday was third place at Daytona International Speedway in the January season opener. It was Wickens’ first professional win since 2017 when he drove in the DTM touring car series in Europe.

“I think it’s incredible,’’ said veteran driver Bill Auberlen, who claimed the overall race win. “We all know (Robert) is a great driver, but finally, to get over that hurdle to get that win.

“I was close enough to watch how they do their pit stop. They get him out of the car and put him in the car, and it’s really neat. I just got to know him here recently, so I wanted to go over and congratulate him. I think it’s amazing.”

The reception for Wickens and Wilkins should be just as amazing next week, when the IMSA Michelin Pilot Challenge heads to their home soil for the Canadian Tire Motorsport Park 120. It will mark the series’ first visit to the track in Bowmanville, Ontario, since 2019.