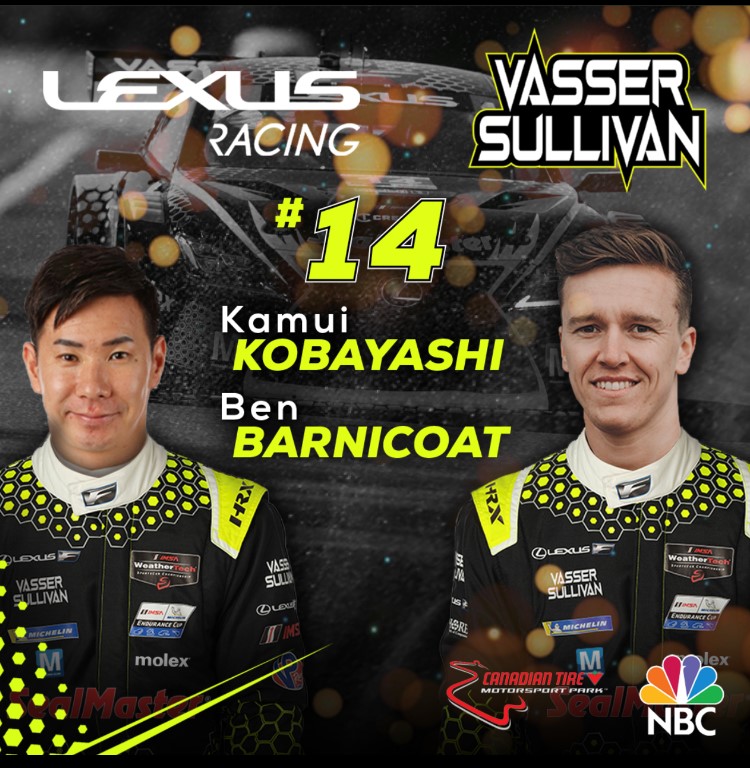 Sports car racing fans are accustomed to Kamui Kobayashi excelling in prototypes, winning the Rolex 24 At Daytona back-to-back and capturing the 24 Hours of Le Mans last year. IMSA WeatherTech SportsCar Championship fans will get to see the talented 35-year-old Japanese driver take on a new challenge this weekend at Canadian Tire Motorsport Park when he joins Ben Barnicoat behind the wheel of the No. 14 Vasser Sullivan Lexus RC F GT3 for the Chevrolet Grand Prix.

Kobayashi is substituting for Jack Hawksworth, who continues recovery from an injury sustained in a motocross incident in May. Barnicoat and the No. 14 Lexus are currently second in the GTD PRO class standings, 98 points out of the lead. Barnicoat and Kyle Kirkwood finished fourth in Sunday’s Sahlen’s Six Hours of The Glen.

“I’m thankful for the opportunity to drive the Lexus RC F GT3 with Vasser Sullivan this weekend in Canada,” said Kobayashi, who has made eight career WeatherTech Championship starts since 2019, all in the Daytona Prototype international (DPi) class. This will mark his first series start in a GT car.

“Obviously, my experience is quite low in a GT car,” Kobayashi admitted. “It’s going to be quite different than what I’m used to driving and it’s going to be challenging, but I’m excited to see how well the RC F handles. I have a lot of support from the Vasser Sullivan team, Lexus and TRD (Toyota Racing Development) USA to help make me comfortable going to Canada. It will be a challenge, but I’m looking forward to it.”

“I’m extremely excited to be sharing a car with Kamui,” Barnicoat said. “He was a Formula One driver when I was growing up coming through the ranks of motorsports, so that’s going to be an amazing opportunity for me to share our Lexus with a driver of his caliber and also help guide him with our RC F GT3. We’re aiming to have a strong weekend and continue pressing on for the championship as we head into the second half of the season.”