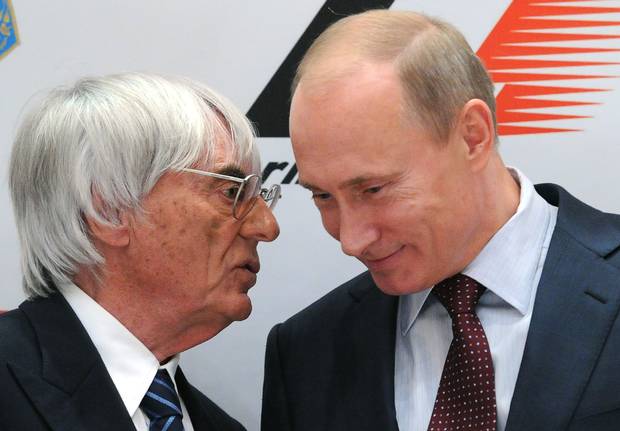 Bernie Ecclestone, worshiped by the British for decades as a F1 god, has said he’d “take a bullet” for Vladimir Putin during a controversial interview on Thursday’s Good Morning Britain.

The former F1 boss described the Russian leader as a “first class person” during a discussion about the war in Ukraine with hosts Ben Shephard and Kate Garraway.

Bernie and Putin’s friendship reportedly blossomed after the pair were introduced at the Russian Grand Prix in 2014.

“I’d still take a bullet for him,” Bernie said of the Russian president after Kate asked if he still regarded him as a friend.

“I’d rather it didn’t hurt, but if it did I’d still take a bullet for him.

“He’s a first-class person. What he’s doing is something he believed is the right thing he was doing for Russia. Unfortunately, he’s like a lot of business people, like me, we make mistakes from time to time.”

‘I’d still take a bullet for him.’

Bernie Ecclestone says Ukrainian President Zelensky should have listened to Putin to avoid war because Putin ‘is a sensible person’. pic.twitter.com/jZ1hLnrYTU

The 91-year-old then discussed the Ukraine president Volodymyr Zelenskyy.

“I think if he’d thought about things, he would have made a big enough effort to speak to Mr Putin, who is a sensible person and would have listened to him and probably would have done something about it,” he said.

After his appearance, a Formula One spokesperson said: “The comments made by Bernie Ecclestone are his personal views and are in very stark contrast to the position of the modern values of our sport.”