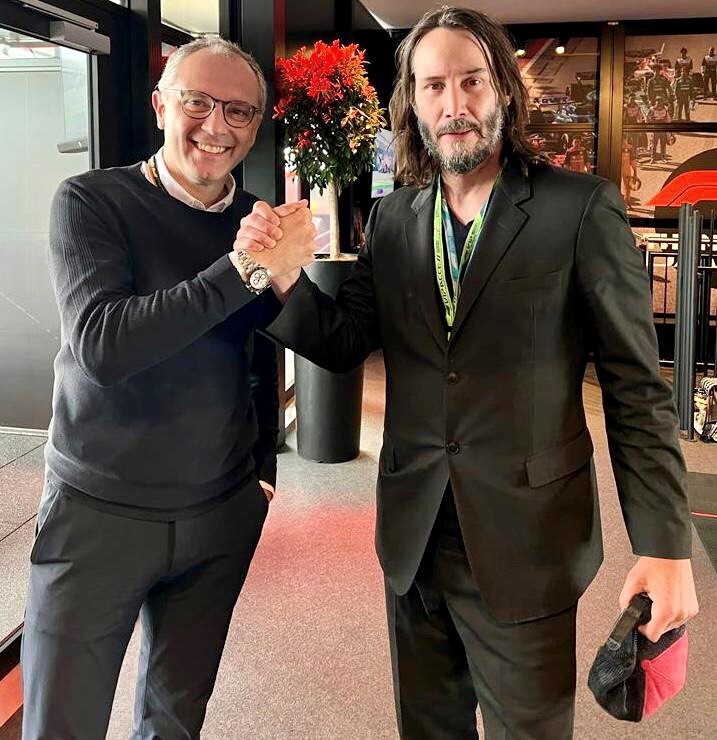 The as-yet-untitled four-part docuseries will reportedly focus on Formula 1 managing director Ross Brawn, who in 2009 bought the Honda team, renamed it Brawn GP and took it to two unprecedented championship victories.

Reeves will host the doc and has already been conducting interviews. Among those believed to be on board are former Ferrari chairman Luca di Montezemolo, whom Reeves was pictured with last month, and drivers Jenson Button and Rubens Barrichello. Brawn himself is also set to take part.

All3Media-owned North One Television is understood to be producing the series.

Reeves has long been known as a speed freak with an extensive motorcycle collection. He even founded his own motorcycle manufacturer, Arch Motorcycle, with Gard Hollinger.

Last week, Reeves was pictured at the British Grand Prix in Silverstone, U.K. (pictured above), where he spoke to a local racing journalist about the doc. “We want to tell that amazing remarkable story [of Brawn GP],” he said. “There is so much to talk about.”

“A friend of mine was telling me the story and I was so struck by it and he was actually working for Brawn back in the day in publicity and he’s a producer/director and so we were like, well let’s tell that story, let’s try and tell that story,” the “John Wick” star continued.

“It’s been really great to be able to learn more about what was going on in Formula One that year. It wasn’t just the cars, new regulations, FOTA [the Formula One Teams Association], breakaway series. I mean there was just so much happening in Formula One at that time. The world of Formula One was just extraordinary. I mean, it’s always extraordinary, but in that year with Brawn GP I think something really special happened.”

Reps for Disney+ declined to confirm the commission but it’s believed the show will air on the streamer in fall 2023.

Formula One is something of a hot topic right now with multiple projects connected to the racing competition in the works. Brad Pitt, John Krasinski and Jerry Bruckheimer have teamed up for a Formula One movie, which has been snapped up by Apple Studios, while a series about ex-Formula One supremo Bernie Ecclestone is also in the works. Italian studio Fandango are also working on a Formula One-themed series, about the competition’s first female driver.  Source: Variety

In this interview at the British GP, actor Keanu Reeves talks about how much he loves F1 and that he is being hosted by Ross Brawn.

“It was absolutely amazing to be that close,” Keanu Reeves said of taking in Saturday’s British Grand Prix qualifying race at Silverstone Circuit in England.

“It was wet but it was thrilling,” he told Sky Sports. “It was absolutely amazing to be that close. Silverstone and rain, perfect. I think being that close to it, just seeing the speed and the way that they’re going at the turns and exiting the turns is something unbelievable.

“We are being hosted by Ross Brawn, he has been a legend and is such an amazing person so it was really cool to meet him and spend some time with him, he offered us the chance to be here. That’s what we are going to try and do, we are going to tell that amazing, remarkable story,” Reeves added.

“From the outside a friend of mine was telling this story and I was so struck by it. We were like ‘Well let’s tell that story’ and it has been really great to be able to learn more from what was going on in F1 back in the day, there was just so much happening in F1,” Reeves explained. “Just the world of F1 was extraordinary, it always is but that year with Brawn I think something special happened.”

Reeves is doing a documentary on the one year (2009) of Brawn GP when they went a kicked everyone’s butt and took the world title with Jenson Button.

Keanu Reeves’ Formula 1 docuseries is reportedly set to premiere on Disney+ in 2023.