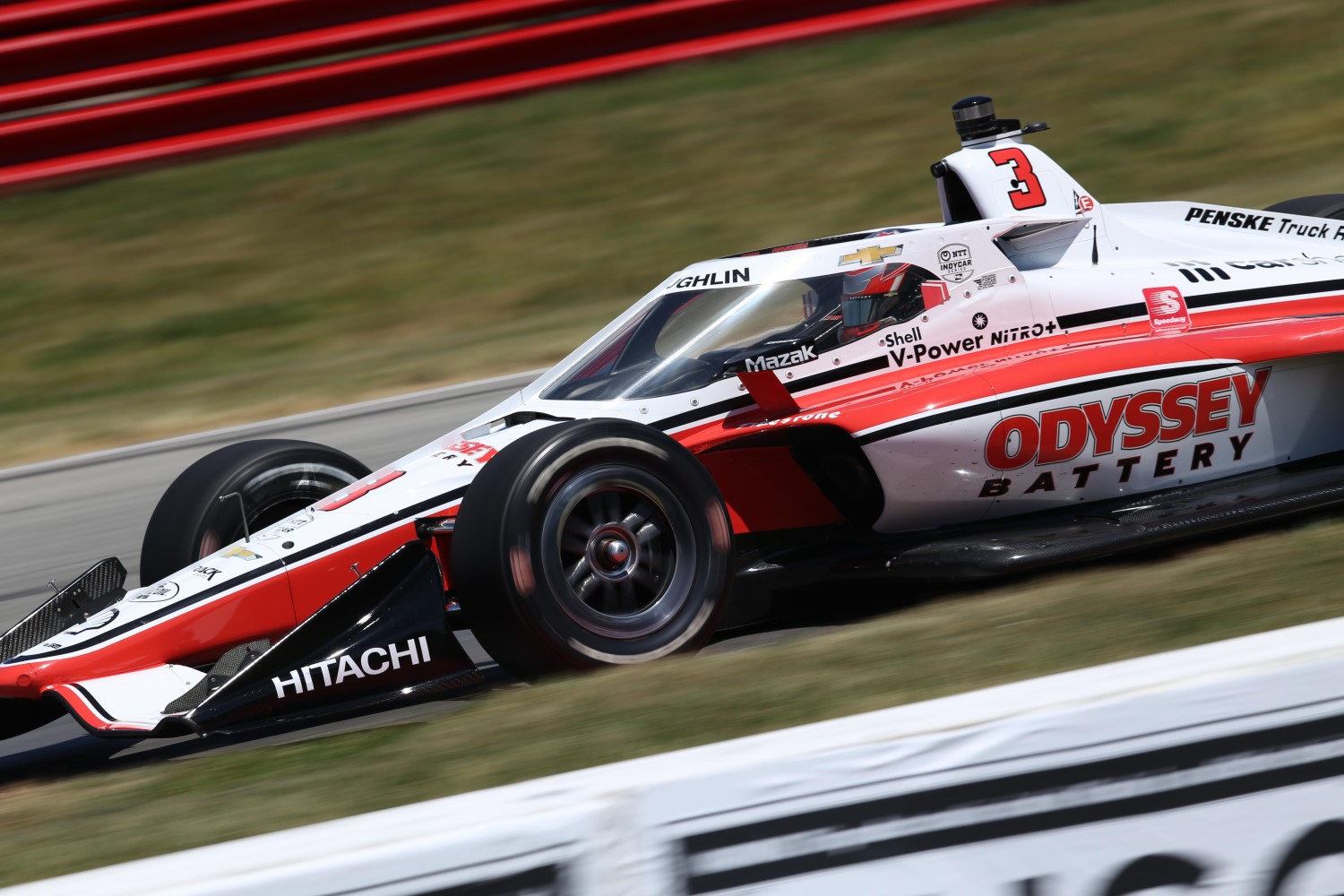 Will Power came from last to third in the drive of the day 3.8s back.

Rinus Veekay and Scott Dixon rounded out the top-5.

“It’s amazing,” said an elated McLaughlin from Victory Lane.  “I really wanted to get a win here even more with my mom and dad here. And our first time we have had Odyssey Battery on the car and you know it was it was awesome as well to have them on board but that mom and dad is very special on America’s weekend.

“Last night I was dressed up as a bald eagle, so maybe I need to do that every year, July 4th weekend.”

Perhaps the highlight of the race was watching Alexander Rossi crashing into almost all of his Andretti Autosport teammates, and Grosjean crashing into teammate Colton Herta. It was a comedy show of wankers, and it left Michael Andretti with smoke coming out of his ears.

Will heads roll in the team meeting called by Michael Andretti below? He should fire Rossi on the spot.  He is a negative energy in the team now, should be sacked, and Kyle Kirkwood called up from the Foyt team.

Romain Grosjean on his race today and the contact with Alexander Rossi and Colton Herta:#Honda200 #IndyCar pic.twitter.com/96m0OKbUuZ

The 80-lap race was treacherous compared to past NTT INDYCAR SERIES races at the track. There were six cautions for 17 laps, more than the previous five Mid-Ohio NTT INDYCAR SERIES races combined. The 2021 race and Race 2 of the 2020 doubleheader each featured two stoppages, while Race 1 of the 2020 doubleheader and the events in 2019 and 2018 did not have any.

The first caution came on Lap 1 for a waved-off start, and the second on Lap 10 was for a mechanical failure on the No. 7 Vuse Arrow McLaren SP Chevrolet of Felix Rosenqvist, who was running third when his car started hitting the rev limiter in Turn 2 and then billowed smoke.

It was an ominous sign for NTT P1 Award winner Pato O’Ward, who led the first 28 laps in the No. 5 Arrow McLaren SP Chevrolet. However, on Lap 30, O’Ward began reporting power issues on his car.

By Lap 54, O’Ward’s car had completely lost power as it stalled at the end of pit lane. His Arrow McLaren SP team pushed the car back to the pit box, where O’Ward exited and ended the streak of Mid-Ohio polesitters winning the race at three.

This allowed McLaughlin, who started second next to O’Ward, to inherit the lead during a round of green flag pit stop cycles on Lap 31. During the stops, rookie Kyle Kirkwood went off track in Turn 9 in the No. 14 Sexton Properties Chevrolet of AJ Foyt Racing.

The yellow flag flew just as green-flag pit stops cycled through, which put McLaughlin at the point. The second-year series driver was in full control of the race on the 13-turn, 2.258-mile permanent road course thereafter.

McLaughlin led 45 of the final 52 laps. Colton Herta led seven laps after not pitting under caution on Lap 53 while the rest of the leaders pitted. McLaughlin got the lead back on Lap 60 and never looked back, keeping Palou in his mirror through a series of cautions and restarts.

Palou, a Spaniard, was never more than second behind New Zealand native McLaughlin, and the final caution on Lap 59 for contact between Romain Grosjean’s No. 28 ForeverLawn/DHL Honda and Alexander Rossi’s No. 27 NAPA AUTO PARTS/AutoNation Honda gave him one last chance to try to capture his first win of 2022.

“Man, it was so close,” said Palou, who started seventh. “Our No. 10 NTT DATA car was fast. We just missed it by ‘this much’ again today, but I’m super proud. I don’t think I was good enough to pass (McLaughlin). I wish I would have gone for it, but I did not see that it was clear to do it.”

McLaughlin’s third podium of the season and Palou’s fourth allowed them to close in on the NTT INDYCAR SERIES championship. Marcus Ericsson held his points lead with a sixth-place finish in the No. 8 Ridgeline Lubricants Honda, but he is now just 20 points ahead of Power. Josef Newgarden is third, 34 points back.

While McLaughlin’s surge in the championship standings will be beneficial down the road, the three-time Australian V8 Supercars champion was basking in the glory of scoring his first NTT INDYCAR SERIES win with his parents, Wayne and Diane, in attendance. The couple came to the United States in May for the “500” and reunited with their son for the first time in two and a half years. This was the first race they’ve seen him win in this series.

“Oh, I really wanted to get a win here with mom and dad for the first time,” McLaughlin said. “To have mom and dad here on America’s weekend is awesome.”