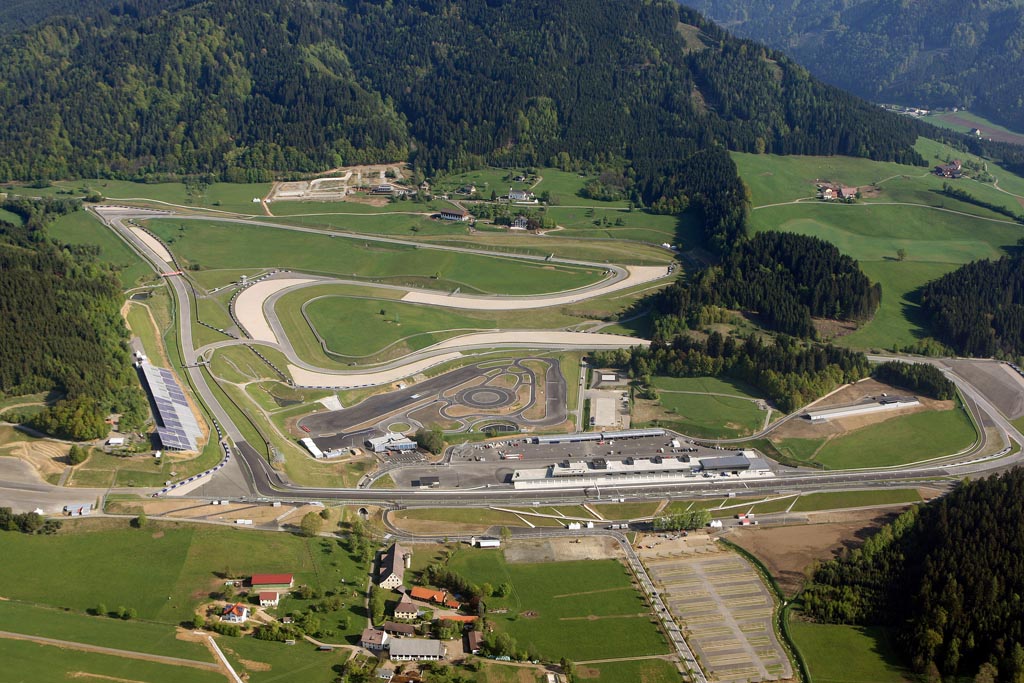 Austria first joined Formula 1’s calendar in 1964, at Zeltweg Airport, but from 1970 it moved to the newly- constructed Osterreichring in the undulating landscape above the village of Spielberg.

Austria’s grand prix again dropped off the schedule for over a decade, with the circuit falling into an unusable state, but after heavy funding from Red Bull it was extensively renovated – with the layout retained – and Austria’s Formula 1 event was revived in 2014.

Austria held the opening two rounds of the 2020 season, as Formula 1 grappled with the early stages of the pandemic, and once more in 2021 Spielberg stepped in to fill the void with back-to-back events.

Now, after four races in two years, Austria is back to its conventional national grand prix – though there will once more be two opportunities to do battle. That’s because F1 Sprint will return for its second of three outings this season, marking the first time the format has been run at Spielberg.

The layout of the circuit is more challenging than is perhaps apparent from the track map, with the tight low-speed corners contrasting heavily with the faster infield corners at T6/7. The significant elevation changes add to the challenge and make some of the braking zones tricky. Finally, the curbs are very tempting for the drivers, but can damage the cars if they are abused. 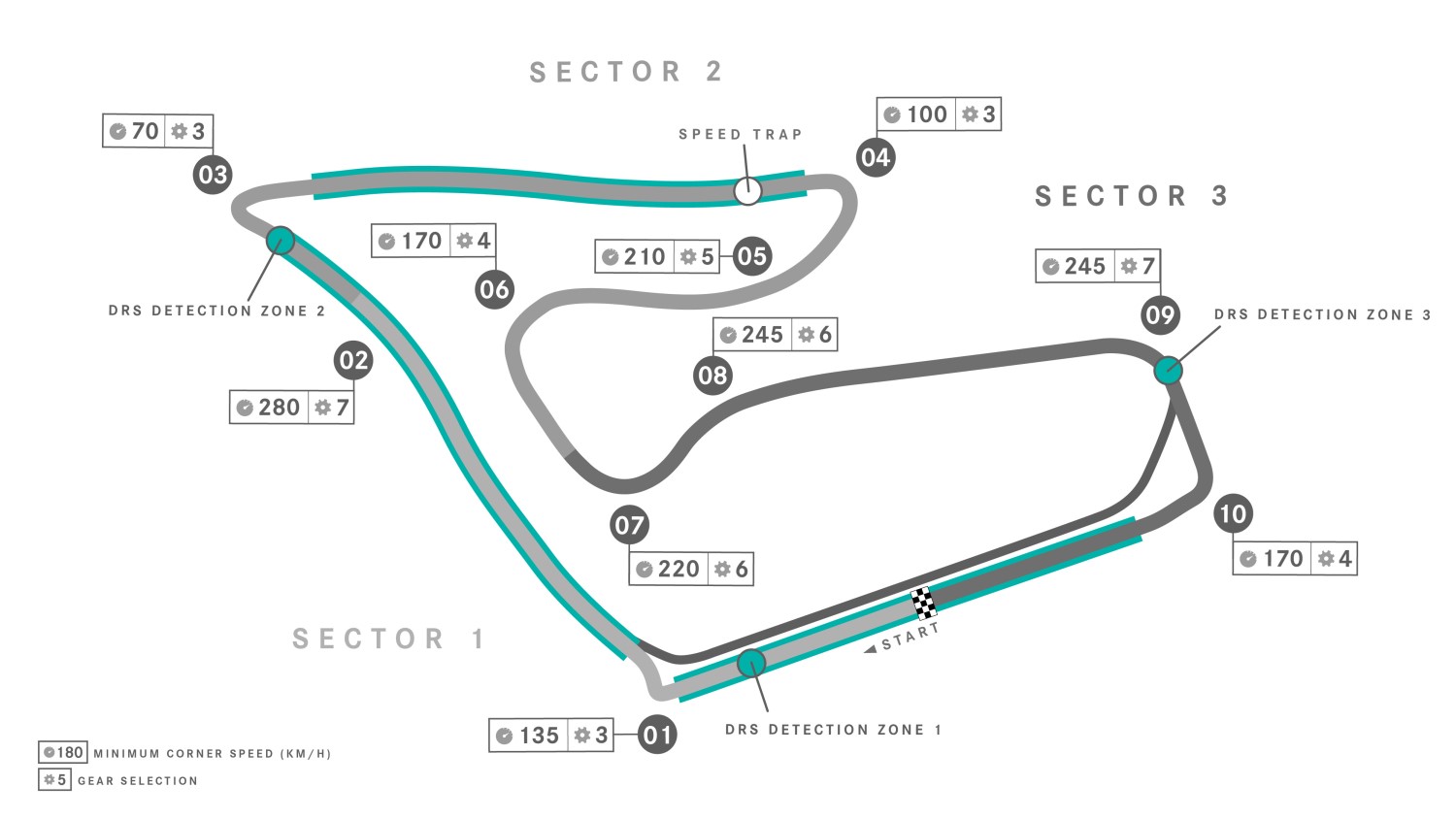 Just like this track, Austria is a country that mixes tradition and modernity like no other. It’s a place where the dirndl meets haute couture; where the Wienerschnitzel lives alongside fusion dining. Loving things that are done as they’ve always been doesn’t mean not appreciating the impetus coming from the new, from the exotic, from the unexpected.

Austria has an Alpine heart but retains the soul of an empire that brought together people, ethnicities, cultures. It’s a place bringing together Mozart’s Don Giovanni and Mark Ronson’s Valerie (knowing both would have appreciated Amy Winehouse). It’s both extremely classic, and extremely badass.

Friday, July 8 – Practice 1 and Sprint Qualifying weather
Conditions: Partly sunny and pleasant, with a very high UV index of 9 with NNW winds blowing at 15km/h and no probability of a thunderstorm.

Saturday, July 9 – Practice 2 and Sprint Race weather
Conditions: Pleasant with clouds and sunshine, with a very high UV index of 9 and NNW winds blowing at 11 km/h with no probability of a thunderstorm.

Sunday, July 10 – Feature Race weather
Conditions: Times of sun and clouds with a 25% chance of thunderstorms in spots with a very high UV index of 9 and NW winds blowing at 13km/h.

The Red Bull Ring is not only the fastest lap on the calendar, it also has the fewest corners, with just 10. This makes every braking zone, apex and corner exit absolutely critical to lap-time.

Hard braking zones conclude all three DRS zones – but the nature of these three corners is very different. Turn One (named after the late Niki Lauda) is uphill and deceptively tight on exit; Turn Three is an overtaking possibility and encourages both attack and defense on entry; Turn Four is a late-apex right-hander that also creates action on both entry and exit.

Two more key corners are the pair of downhill right-handers that conclude the lap. Both are extremely fast, requiring maximum commitment and extreme accuracy – running wide can result in laps being deleted due to exceeding track limits and impacts with the large exit curbs.

“I have a lot of good memories from racing in Austria so I’m really excited to go back.

“It’s a really interesting track with not many corners, it’s a lot of fun to drive. The atmosphere is always great, I love seeing the fans in the grandstands, and I think people in general just really enjoy the weekend there.

“Silverstone was a tough race but we look ahead and hopefully we can have a good weekend and really maximize the points available over a Sprint weekend at our home circuit. I expect it to be a good weekend for us as a Team.”

“Its going to be great to be back in Austria this week. It’s one of our home races and you feel that the minute you enter the circuit, the Team get incredible support there. I am looking forward to this weekend massively, I think it’s safe to say we’ll be the most supported Team and we want to give the fans something back.

“I’m coming off the back of a very pleasing result at the British GP, I always say never give up, and this was the case at Silverstone. We hadn’t had the best weekend up to that point with the car but in the end I managed to get on the podium and we all need to be proud of that.

“We’re set for another battle on track in Austria and I think all the drivers can say we’re having a lot of fun racing each other this season.”

Mario Isola on Pirelli Tires to be used

The asphalt at the Red Bull Ring offers reasonably low grip on a low-severity circuit, which makes it possible to bring the softest tires in the range. This helps us in putting the focus on entertainment, at a venue that has often delivered exciting races in the past, thanks to a busy and compact lap that’s essentially a series of short corners. Traction and especially braking are key here: with a particular risk of lock-ups in some of the tricky downhill braking areas. Maintaining the performance of the rear tires throughout the lap is also vital to ensure adequate traction. Our tire nomination makes a variety of different potential strategies possible. 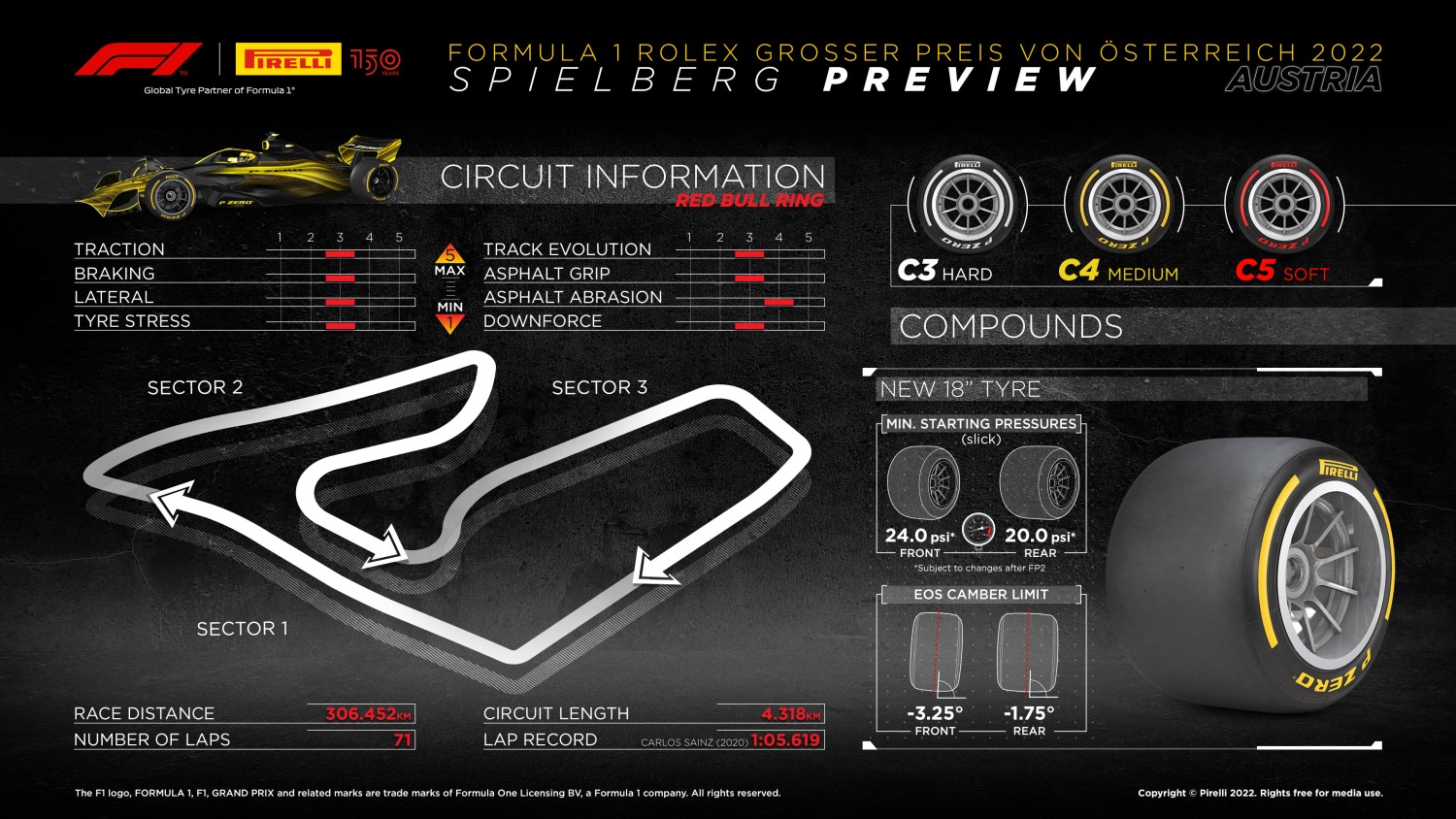