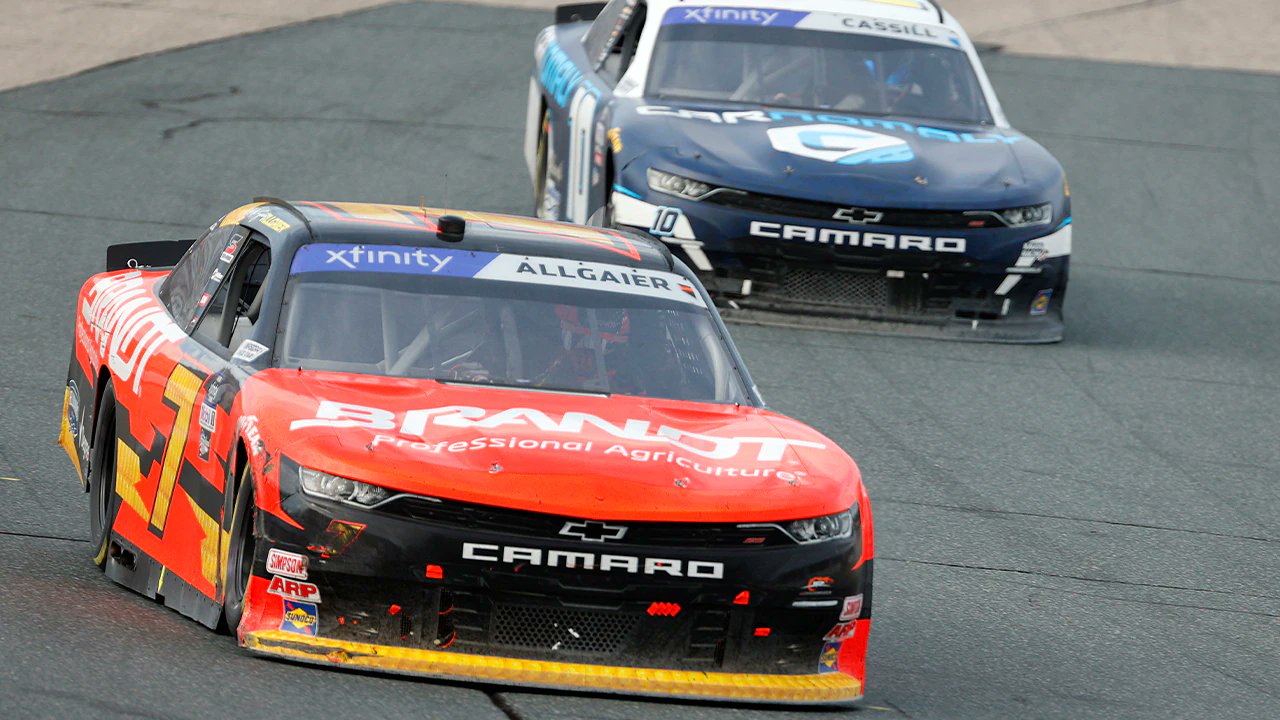 Justin Allgaier prevailed in an action-packed Crayon 200 at New Hampshire Motor Speedway on Saturday, earning his third victory of the season and a very special birthday present for his wife, Ashley. A race trophy.

The driver of the No. 7 JR Motorsports Chevrolet delivered Chevy’s first win at the 1.058-mile track in 15 years. It’s Allgaier’s third win of the season – coming a comfortable 3.869-seconds ahead of Joe Gibbs Racing Toyota driver Trevor Bayne, who was trying to earn the JGR team its seventh consecutive New Hampshire win.

“We finished second here last year to one (Toyota) and I told these guys I really wanted to win here,’’ said Allgaier, who now has three wins in the last eight races. “This place has been so much fun over the years.’’

“First of all, it’s my wife’s birthday, so if I can’t be with my wife on her birthday, the best thing to do is take home a trophy to her. Just proud of the team.”

It was, at times, a dramatic drive for the 36-year-old Illinois driver. He had an incident with Julia Landauer’s car early – apologizing to her after the race. And although he ran top five for most of the day, he didn’t actually lead the race until 48 laps remaining — dicing it up with Landon Cassill, who was looking for his first career win.

The two exchanged the lead five times in the closing 60 laps with Allgaier able to pull away for good with 19 laps to go.

Cassill, who led 17 laps, ultimately had his third-place finish disqualified for post-race inspection violations – the rear of his No. 10 Kaulig Racing Chevrolet was ruled too low.

The fourth-place finisher, Allgaier’s JR Motorsports teammate Noah Gragson in the No. 9 JRM Chevrolet was also disqualified after a failed post-race inspection. His car failed front body inspection heights and was too low. The DQ dropped him from fourth place to fifth place in the season standings, now 99 points behind leader AJ Allmendinger but safely in the Playoffs with two victories.

The two disqualifications moved fifth-place finisher Brandon Brown in the No. 68 Chevrolet officially into third place in the official race results – the best result and first top-5 of the season for the 29-year-old Virginian’s family-owned team.

It may have been a Toyota-dominated Victory Lane for most of the past few years, but even with the disqualifications to Cassill and Gragson, Chevrolet drivers still made up nine of the top 10 positions on Saturday.

The race included 10 caution periods (including a nearly eight-minute red flag), and there were 15 lead changes among 10 drivers with Joe Gibbs Racing’s Ty Gibbs led the most laps (49) on the day.

Both Gibbs and championship leader Allmendinger were noticeably absent from that group atop the scoreboard. Gibbs’ No. 54 JGR Toyota suffered a mechanical problem just after the Stage 2 break and he finished 21st – the second week in a row he’s had a sub-20th-place showing.

Allmendinger was involved in one of the multi-car accidents, hitting the wall with 58 laps remaining and forced to pit for extensive repairs to his No. 16 Kaulig Racing Chevrolet. He finished one position ahead of Gibbs in 20th place.

The race was red-flagged with 125 laps complete after contact between the cars of Sheldon Creed and pole winner Josh Berry sparked a multi-car stack-up exiting Turn 2. Myatt Snider, Ryan Sieg, Jeb Burton and Riley Herbst all piled in behind Berry’s spinning No. 8 Chevrolet, with Sieg’s No. 39 entry vaulting up after heavy contact from Burton’s No. 27.

The rough day for Gibbs and the good day for Allgaier shook up the points standings with Allmendinger now leading Allgaier by 16 points. Gibbs is now third place, 28 points back.

Landauer placed 36th in the 38-car field in her Xfinity Series debut, completing just 90 laps after involvement in a pair of crashes with her No. 45 Alpha Prime Racing Chevrolet. Contact with the No. 7 Chevy of Allgaier on Lap 34 sent her car spinning into the inside retaining wall, and a Lap 98 tangle with Matt Mills left Landauer’s car with terminal damage.