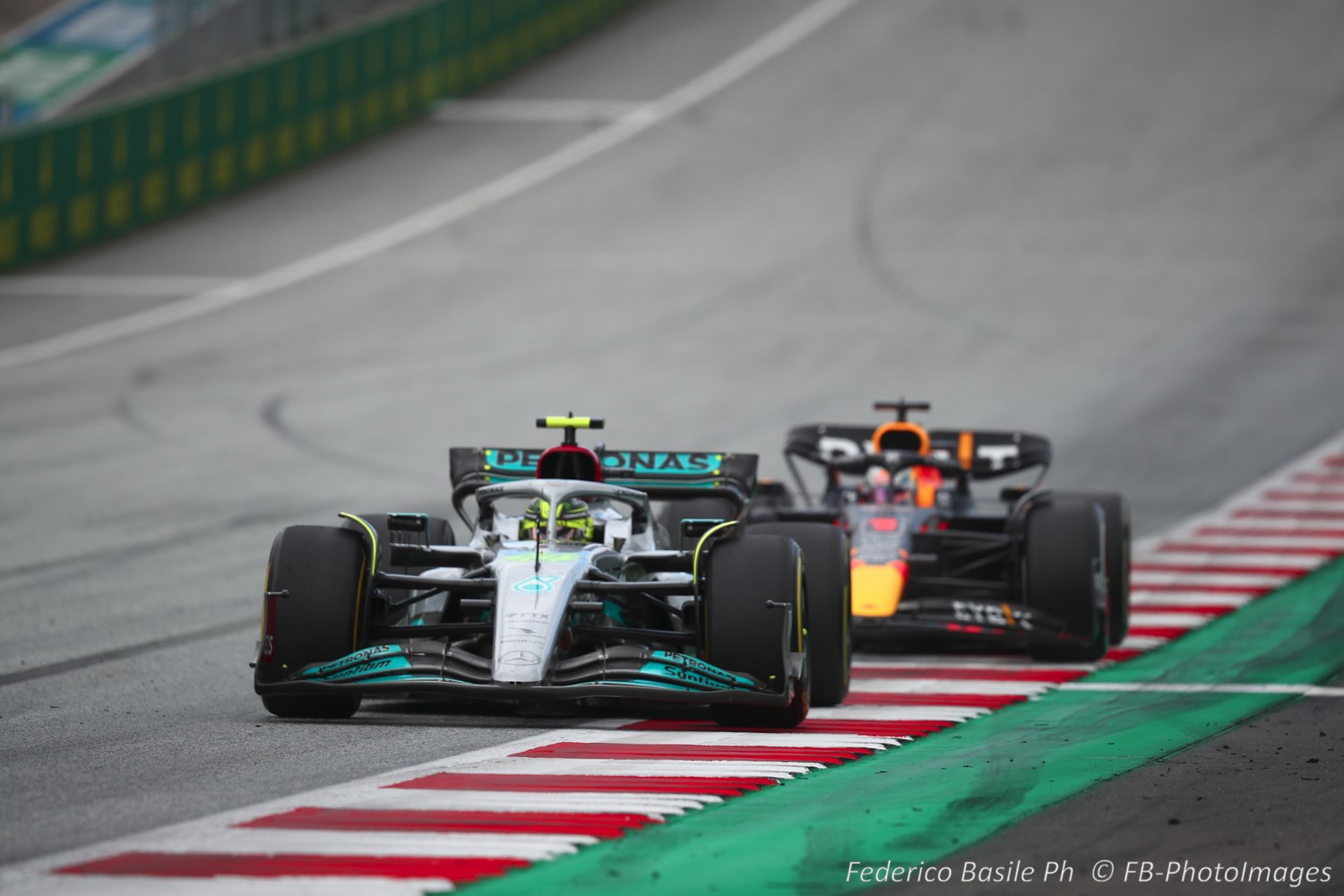 Appearing on the F1 Nation podcast, Berger joined hosts Damon Hill and Tom Clarkson to discuss the chances of Mercedes fighting at the front this weekend after both Russell and Hamilton showed immense pace in practice and early in qualifying for the Austrian Grand Prix.

“I wouldn’t go that far,” the Austrian replied when asked about the possibility.

“The Mercedes hasn’t worked really well anywhere this year. It could be maybe a bit better, but I don’t think it will go so much in this direction that they suddenly will play a role to win the race.”

“It’s a very different style of circuit. I wouldn’t be surprised if the Mercedes works a bit better there, it’s very flat. But in general, it will be again a fight between Red Bull and Ferrari.”

“I think Mercedes will let rip this weekend and be really impressive,” Clarkson said.

“We will see Lewis Hamilton back to his best. Can you imagine if we had Hamilton, [Max] Verstappen and [Charles] Leclerc all going for the win?”

Hill said circumstances of a collision or incident could turn the order of the race upside down, but also put Hamilton forward as his race winner.

“Because I think, in race trim, Lewis has been, on occasions, very quick. It could even be Lewis in first, George in second and Carlos Sainz in third. How about that?”

Berger, well known for his straightforward nature and willingness to play pranks on those around him, was having none of it.

“Which passport do you have?” he wryly asked the two hosts. “What’s going on with you guys, are you drinking or what?”

Asked about whether Hamilton would be finding 2022 particularly difficult given his less competitive machinery this season, Berger said, “For him, the toughest is that he lost the championship last year, because last year he would have put himself in the books as the most successful Formula 1 driver ever.

“Not winning the championship means it’s Michael Schumacher and Lewis Hamilton. This, for him, in the way how he seeks to beat all the records, which has been very impressive until now, this is something where he needs to still win one championship.

“It could be really difficult because now, with the new regulations, Mercedes have first to catch up with the others. Not thinking about having an advantage, as they had very often in the last years. So now it could be a long way [away].

“But in Formula 1, saying ‘I need to win the championship’, it doesn’t work. I think this is something where, for him, it is probably a difficult situation. Then having the car as he has now, you can see [that] when the car starts to work a bit better, he can go to the podium and he finds his performance again.”

(GMM) World champion and 2022 championship leader Max Verstappen thinks Mercedes could soon be back in the fight for victories.

The Red Bull driver admits his rivalry with the German team and Lewis Hamilton has taken a back seat for now, but “it will be different if we fight each other again”.

Indeed, Hamilton has returned to the podium recently – and George Russell says he wasn’t far away in Austria.

“The positive thing is that I was only about 15 seconds from the podium,” said the 24-year-old.

Mercedes, having apparently solved its ‘porpoising’ issue with the 2022 car, is now pressing the throttle on car upgrades at essentially each race.

“Our best upgrade will be one that you don’t see,” an engineer at the Brackley based team is quoted as saying by Auto Motor und Sport.

Toto Wolff says the gap to Red Bull and Ferrari is now only “two to three tenths” – even though he admits it is often bigger than that.

“We still have to solve that problem,” he said.

Paul Ricard, with its very smooth surface, is expected to particularly suit the innovative W13 design, especially in terms of one-lap qualifying pace.

“If they can start further up the grid, they would already be up there at the front,” Mathias Lauda, son of Mercedes’ late chairman Niki Lauda, told Servus TV.

Red Bull boss Christian Horner said: “We expect Mercedes to be fast at Paul Ricard. There are clear signs that they are keeping their porpoising problems under control.

“They’re getting closer to us,” he added. “I expect a six-driver fight which is a fabulous thing for the fans.

“They’re getting involved, which will sometimes help us and sometimes hurt us in the battle for the world championship.”

Verstappen agrees that race wins are even back on the cards.

“Maybe at the end of the season. We’ll see,” said the Dutchman.

“They are better than at the start of the year but they need just a little bit more.”

Former F1 supremo Bernie Ecclestone even thinks it will be enough to motivate Lewis Hamilton to stay in the sport rather than look elsewhere for challenges.

“At the beginning of the year, I was ready to bet that Hamilton would win the eighth title and leave,” he is quoted by Speed Week.

“But now it does not look like he will leave Formula 1. Maybe he realized that making money in the fashion industry is not as easy as it is here.”