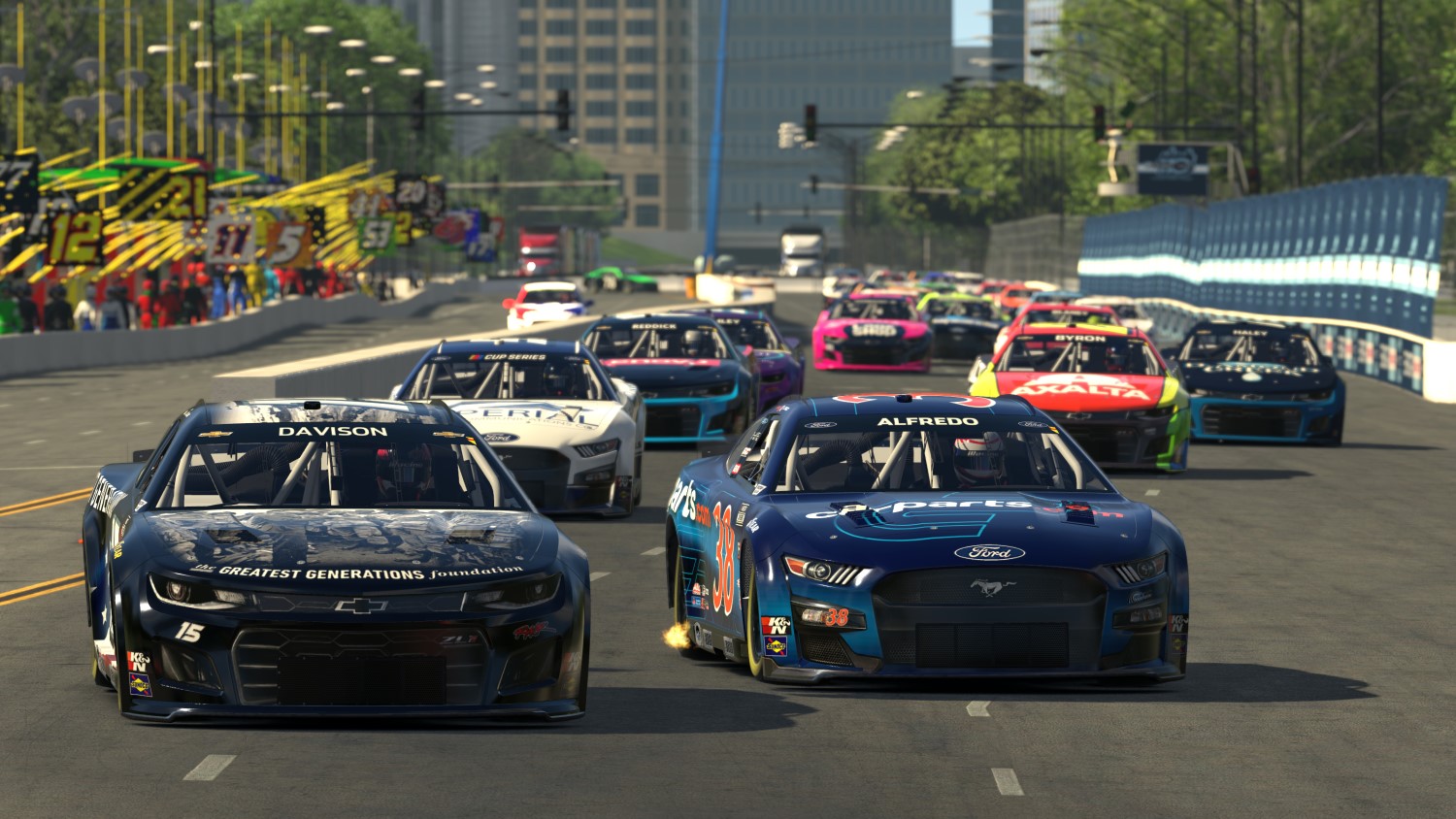 For the first time ever, the sights, sounds and speed of NASCAR are coming to the streets of downtown Chicago on July 1-2, 2023. One of the most iconic cities in the world, Chicago will add another chapter to its illustrious sports history when a NASCAR Cup Series street race debuts against the backdrop of Lake Michigan and Grant Park, televised on NBC.

“Like the Busch Light Clash at the Coliseum, we seized an incredible opportunity to add an unprecedented element to our schedule and take center stage in the heart of another major metropolitan market,” said Ben Kennedy, NASCAR senior vice president of racing development and strategy. “This is the ideal setting for the first-ever NASCAR Cup Series street race. The NASCAR Cup Series Next Gen cars and the IMSA machines will race along the shores of Lake Michigan in downtown Chicago, marking a truly historic moment for our sport. We are very appreciative of Mayor Lori Lightfoot and her team, along with the entire city of Chicago for working with us to make this concept a reality.”

The first-ever NASCAR Cup Series street-course race will take place July 2, 2023 and be preceded by an IMSA-sanctioned race, which will run July 1, 2023. The specific IMSA series joining the NASCAR Cup Series in Chicago will be announced at a later date. Both races will be surrounded by music and entertainment options for all ages, truly making it one of the signature sporting and entertainment events of the year.

“Chicago’s streets are as iconic as our skyline and our reputation as a world class sports city is indisputable,” Lightfoot said. “I am thrilled to welcome our partners at NASCAR to Chicago for an event that will attract thousands of people to our city. Chicago’s world class entertainment and hospitality industries, coupled with our city’s history as a conduit for sports talent, make us the perfect hosts for this unique event.”

Lake Shore Drive, Michigan Avenue, Columbus Drive and select surrounding thoroughfares will be transformed into a 12-turn, 2.2-mile street course, with the start-finish line and pit road located along South Columbus Drive directly in front of Buckingham Fountain. The course will pass through the famed Grant Park, as well as approach the northern edge of Soldier Field, one of the most notable and recognizable sports venues in the country — and the site of the only other Cup Series race to take place in downtown Chicago, in 1956.

“Welcoming yet another NASCAR event to Illinois just weeks after the inaugural Enjoy Illinois 300 Cup Series race is a testament to the strength of our tourism industry from Chicago to Metro East,” Governor JB Pritzker said. “Illinois, with its longstanding tradition of innovation, is a fitting host for NASCAR’s first-ever street race, and we are thrilled to welcome this new series to America’s most iconic drive next summer.”

“Chicago is one of the world’s top sports and entertainment destinations. Year after year, fans from all over the world travel to our great city for high-profile sporting events,” said Kara Bachman, executive director, Chicago Sports Commission: “The 2023 NASCAR Chicago Street Race weekend will continue that legacy with another monumental sports moment and we look forward to welcoming fans to NASCAR’s first-ever street race.”

Tickets for the 2023 NASCAR Chicago Street Race Weekend will go on sale later this year at NASCARChicago.com. Additional details and elements of the weekend will be announced soon, and fans can follow @NASCARChicago on social media for the latest real-time updates on all aspects of the event.

The remainder of the 2023 schedules for the NASCAR Cup Series, NASCAR Xfinity Series, NASCAR Camping World Truck Series and IMSA will be announced at a later date.

“Really excited about announcing that for the first time with our national series that we’ll be bringing it to a street course, and what better place to do it than downtown Chicago, such an iconic city,” said Ben Kennedy, NASCAR senior vice president of racing development and strategy. “You think about the history of sports there, the iconic monuments and facilities around Chicago, and the support that we’ve had around Chicago as well. Mix that in with the great racing that we’ve seen with our NASCAR Cup Series, certainly going to be a very special moment in the summer of 2023 as we go street-course racing for the first time with the series.” 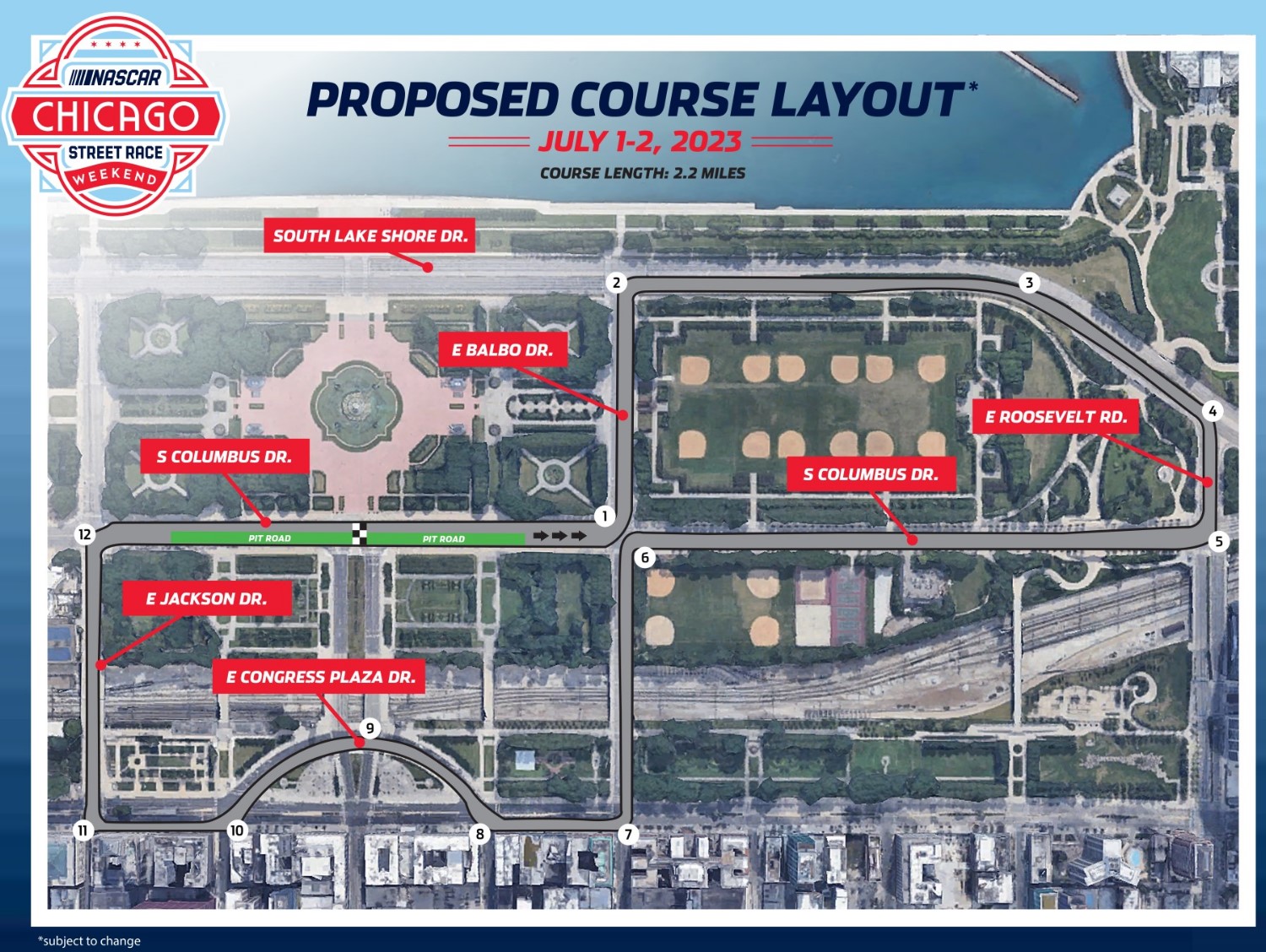 The Chicago event fits the recently cast mold of innovative additions to the Cup Series schedule, following the lead of bringing back dirt-track racing at Bristol Motor Speedway and the first-ever Busch Light Clash at the Coliseum earlier this year in Los Angeles. NASCAR’s top division will run on city streets for the first time in proximity to many Windy City landmarks, including Grant Park, Buckingham Fountain and the edge of Soldier Field. Iconic street names — Michigan Avenue and Lake Shore Drive — will be a part of the 2.2-mile layout.

The course was first developed on the iRacing platform and was used in the eNASCAR Pro Invitational Series last year. When that virtual circuit was unveiled, Kennedy said that “as we look at future schedules, certainly have everything on the table.” Tuesday’s announcement means that the sim-racing feasibility study will soon have a real-life corollary.

“Certainly a lot of work by the team in coming up with not only the vision for the iRacing event to be able to prove out what the track would look like, but then ultimately, what the site plan looks like, what the events and activities will look like on the event weekend, which will look significantly different from what we’ve seen at a lot of some of our other events,” Kennedy said. “We’ll have a number of different music acts, you know, different entertainment options throughout the weekend. IMSA will be joining us with one of their series as well, leading into the Cup Series on Sunday.

“So, really excited about it. A lot of work by the team so far to get to where we’re at today; a lot of work to go before July 1st and 2nd of next year, though.”

NASCAR officials indicated that the rest of the Cup Series, Xfinity Series and Camping World Truck Series schedule would be released at a later date. Only a handful of Cup Series dates have been revealed for 2023. Tickets are on sale for the season-opening Daytona 500, scheduled for Feb. 19. A return to the LA Coliseum for the preseason Busch Light Clash exhibition is set for Feb. 5.

Kennedy confirmed that the Chicago Street Race would replace Road America on the Independence Day weekend slot on the schedule. The 4.048-mile road course in Elkhart Lake, Wisconsin — some 150 miles north of Chicago — hosted the Cup Series the last two seasons.

Kennedy says he’s hopeful the event will replicate the festival atmosphere from previous racing weekends around the July 4 holiday.

“Certainly the city of Chicago comes alive in the summer. It certainly comes alive around July 4th, so we think it’s gonna be really special from that perspective,” Kennedy said. “On the Road America front, we won’t be going back with the Cup Series in 2023. They’ve been great partners. We’ve seen some great racing there over the past couple of years with the Cup Series. We’ve seen a great turnout from a fan base perspective. Unfortunately, won’t be going back with the Cup Series, but I’d say as far as the 2023 schedule goes, stay tuned for more on the Cup Series, Truck Series and Xfinity Series and look forward to sharing more on that here hopefully in the next month or so.”

NASCAR has an array of long-running connections to the Chicago area. A Cup Series event in 1956 joined the regular rotation of auto racing at Soldier Field, now home to the Chicago Bears. More recently, the 1.5-mile Chicagoland Speedway in Joliet hosted the Cup Series from 2001-2019.

NASCAR’s experience with street-circuit racing is more limited. The former NASCAR Southwest Tour competed on a temporary layout near the LA Coliseum from 1998-2000, and the former NASCAR Winston West circuit ran four street races in the Pacific Northwest from 1986-88 — two each in the Washington cities of Spokane and Tacoma.

The versatility of the Next Gen car that debuted this year in the NASCAR Cup Series, plus the proof of concept that emerged from the Los Angeles Clash, have prompted Kennedy and the sanctioning body’s schedule makers to take the show on the road — or in this case, the downtown streets.

“We’ve talked about this before, but it gives us the ability to go into new markets,” Kennedy said of the stadium-style Clash event, “I think street courses gives us that ability as well. That said, it’s important for us to keep the integrity that we’ve had in the schedule, right? Mile and a half, superspeedway, short tracks are all important to our schedule. Adding a street course to the schedule I think is going to continue to make it probably the most diverse motorsports schedule that exists out there today, and we’re really excited about that. But I think it gives us the ability, as we think on into the future to enter some of the new markets and look at some of our events in different ways.”