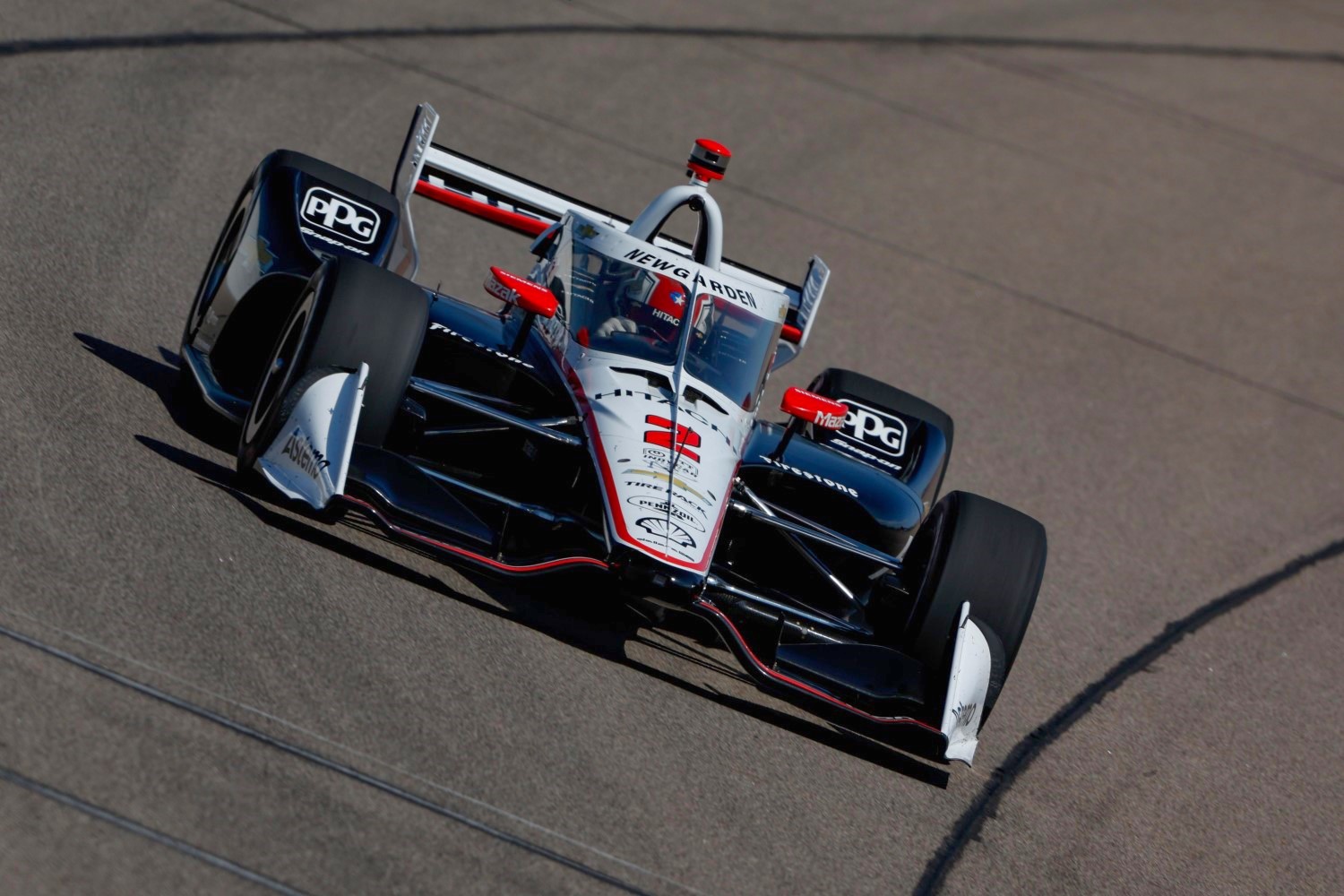 In front of a great crowd and with a temperature of 98 degrees, Newgarden and his Penske Chevy teammate Will Power led almost every lap of the race.   This is Newgarden’s fourth win at the short oval track.

Will Power, Rinus VeeKay and Scott Dixon rounded out the top five.

The first yellow came at lap 16 when Ganassi Racing’s Jimmie Johnson spun in turn four but kept it off the walls.   Using an alternate strategy, Johnson was the only other driver to lead any laps, from lap 61 to lap 80, when he came in for service.

The 2nd yellow came on lap 110 when Arrow McLaren SP’s Felix Rosenqvist  backed his entry into turn 2.  The Swede was seen and released from the infield care center.

Then a yellow for debris on lap 126 lasted four laps.

The final yellow came out on lap 164 when Ed Carpenter Racing’s number 33 entry driven by the team owner, Ed Carpenter, made contact with the SAFER barrier in turn 3.

The Ganassi Racing drivers did not qualify well for this race, but the three drivers in the points race for the championship, managed to have good finishes to keep themselves in the battle.

“It’s been a frustrating year in some regards. But it’s been tempered with great results. I mean, to your point, we’ve had four wins. I feel like we’ve showed  up at most of these weekends capable of winning the race.”

“Fortunately four of them have worked out pretty nicely. But, yeah, it’s either working out like that or it’s just going sideways to some degree. I don’t know that I want to put that on any one specific thing. It’s been kind of bad timing in a lot of respects this year. Mid-Ohio was bad timing, qualifying and the race. Toronto we had bad qualifying with P2 going out, hampered qualifying. Bad positions on the pit stop. Even the pit cycle before that was bad timing on when we pit.”

“I don’t really think it’s anyone’s fault. I don’t think we have a problem in any part of the team. For whatever reason, we have odd timing on most of these weekends. The other weekends where there is no odd timing, we win the race. I think if we could find the middle ground there, we’d be handily in the points lead. We can’t seem to find that
balance right now.”

“It’s always tough around here in Iowa. You’ve got to be really good in and out of traffic. Today was the same thing. I saw more dropoff today, though, than perhaps 2020. Being a day race makes that very different.”

“But it’s the name of the game. Keeping after the tires and your adjustments to keep after the tires, being able to get through traffic, those are the two ingredients you need to win here at Iowa.”

“It was a really solid points day for us today. I thought we had a little bit more for Josef in the end. He was really strong. All Penske cars were extremely strong.”

“It was all about what can we do different to them to be able to just have a shot at getting by them. I had to use my tires a bit much. I think Will was on the same train battling with me and Palou, Marcus. So I think we used up our tires a little bit more than what Josef did. He had a little bit more to give in the end.”

“I was happy with my car. Didn’t really start off very good. We were just extremely, extremely loose. As we saw in the 7 car, unfortunate. Yeah, glad Felix is okay. We need to see what we can do better for tomorrow to not have that because it took a lot of pit stops to get it into a window where we could actually attack rather than just being a little bit of a passenger.”

“Yeah, really happy with our day.”

“It was a good battle. Last restart is what hurt me the most, trying to keep guys behind. Had a couple of big yaw moments on the rear tire early. Pounded on that rear too much to stay ahead. Then went loose, really loose. I had some big saves.”

“I was happy to end up third actually. I was thinking we might fall back a bit further. Some good lessons in there for tomorrow. But it is difficult when you get attacked. You can’t do much. You want to be the leader because you’re in clean air, so much easier to conserve your tires up there.”

“Yeah, kind of a second-gear restart, that was a mistake. That’s what Josef got me. I should have been smarter on that.”

” You never look back on a day when finishing third is a bad thing. There’s a few things I could have done a little better, been a bit more aggressive with the tools in the car to make sure the rear wouldn’t go off.”

“I felt like we had a strong car. I was a bit conservative at the start, not attacking as much as Josef was. Then when we had the restart and I was starting to attack Josef, that’s
when I started to be a bit more aggressive and felt a bit stronger.”

“I had so much fun out there today. Watched so many great races at this track. To be here in person, drive on it in an INDYCAR is such a rush. The first two-thirds of the race I really felt like we had a car competitive enough to win. Then there at the end it kind of slipped away from us. I think the longer run at the end also kind of exposed a weakness in our car, and I faded a bit more.”

“We’ll sleep on it tonight, work with our teammates and engineers, make some good changes for tomorrow and come back stronger.”

” I mean, these cars really reward confidence. A Cup car, I think they reward patience and finesse. There’s a different skill set that goes with it. You’re going so damn fast in these things, the more downforce it creates, the confidence really rewards you.”

“Certainly hoping so. I hope tomorrow I have an even sharper performance.”