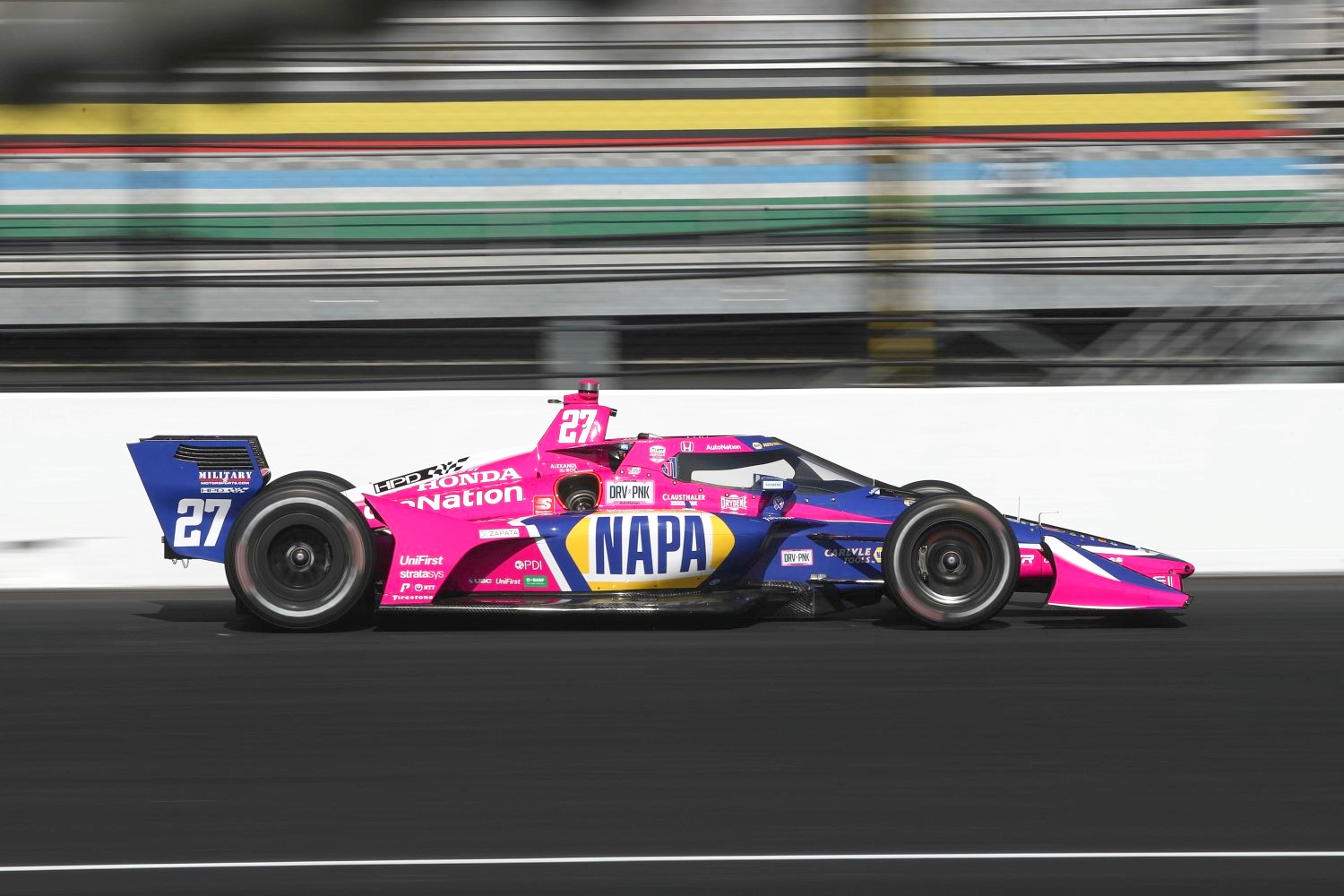 Andretti Autosport’s Alexander Rossi took the checkered flag this afternoon in the Gallagher GP at the Indianapolis Motor Speedway, after being winless for 49 races.  The last time he won was back in 2019.

Rossi, who started second, took the lead for good on Lap 42 when leader and teammate Colton Herta lost drive after navigating Turn 8 on the 11-turn, 2.439-mile road course in the No. 26 Gainbridge Honda. Herta was able to coast to the entry of the pit lane, but his race was over. He was credited with 24th place.

Rossi dominated the second half of today’s race, as the Andretti Autosport driver headed a 1-2 finish for Honda and completed a sweep of NTT INDYCAR SERIES races at the famed “Brickyard” in 2022.  Rossi led a race-high 44 laps in the 85-lap contest to record his first win of 2022, and his eighth career victory.

The rookie for Rahal Letterman Lanigan,  Christian Lundgaard crossed the finish line second.  I guess having David Letterman here at the track did bring him some good luck.

Power once again produced a composed drive, overcoming early near-calamity, to take the points lead. Power made contact with the No. 5 Arrow McLaren SP Chevrolet of Pato O’Ward in a three-wide traffic jam in Turns 1 and 2 on the first lap and also had an early dustup with the No. 06 AutoNation/SiriusXM Honda of Helio Castroneves, finding himself in 16th in the early laps.

But Power calmly drove through the field to earn his seventh podium finish of the season.

“A great recovery, man,” Power said. “You can never expect a normal day in INDYCAR. Everyone is very aggressive, and it’s so hard to win in this series. It’s the toughest series in the world. Great job by the Verizon 5G guys. It’s amazing we can go back there and recover all the way to third.”

Pit strategy helped the Penske drivers to move up to the front.  With the first yellow flag on lap three, Will Power pitted on lap four.

Josef Newgarden received a give up track position order on lap four.    He had to move back two positions.

Colton Herta, driver of the number 26 Gainbridge Andretti Autosport entry, was having a good day after taking the lead on Lap eight.  Herta pitted on Lap 14, along with his teammate Rossi.  On Lap 35, Simon Pagenaud, driver of the number 60 AutoNation/Sirius XM entry slowed on track in Turn 7.  When the race went green on Lap 39, Herta was now the leader. with Rossi behind him.

But the lead would not last long.  On Lap 42, Herta slowed down on course in Turn 12 and was brought behind the pit wall.

Rossi took the lead on Lap 42 and led to the checkered flag.

“Yeah, it’s a lot of relief I think is the main word. We’ve had some race wins that we’ve thrown away for sure, and we’ve had some weekends where we’ve just kind of not had the pace, and for whatever reason.”

“I think that we knew things were trending in a good direction this year, and we had a solid test here a month or so ago. I think the one constant has been just the mental strength of the whole team. As challenging as it is for me, it’s also hard for them. They go in every day and work their butts off, and when they don’t get results, it’s hard for them,
as well.”

“I think as a unit, that’s one of our strengths is being able to continue to just push forward. It’s a big team win and a big thank you to the whole organization. Obviously the cars were fast.”

“It sucks what happened to Colton, but I’ve had my share of things. It comes full circle, I guess, sometimes, so it’s good to be up there.”

Christian Lundgaard just celebrated his 21st birthday last Saturday in Iowa.  Having his best finish of the 2022 season, the Dane was quite pleased.

“It feels amazing. I think the best feeling right now is that the team really deserves it. They’ve worked super hard, and we’ve had such a struggling beginning to the season, and I think coming to Toronto was when things started to change. ”

“We saw sort of a streak where we started to perform better. Even Road America, Mid-Ohio was there. We were on the edge of top 10. To come here and finish second, I think
the team deserves every bit of it. ”

I’m just a guy doing my job really. I want to win, so I try as best I can every event.”

Will Power is now the championship points leader with  nine points over Marcus Ericsson, who brought his Chip Ganassi Racing entry home eleventh after starting 25th.

Power commented on his race day. “Considering the start of the race, yep, great recovery, man. Great recovery. It’s amazing some of the runs we’ve had this year. But yep, just kept my head and did what I could in the situation. I had to get a big fuel number and go as fast as I can.”

” It’s always hard starting fourth or the outside row at this track. You get — I don’t know, you get freight trained. So it’s tough going into 1.”

“Very good day. Good day for the team all around.”