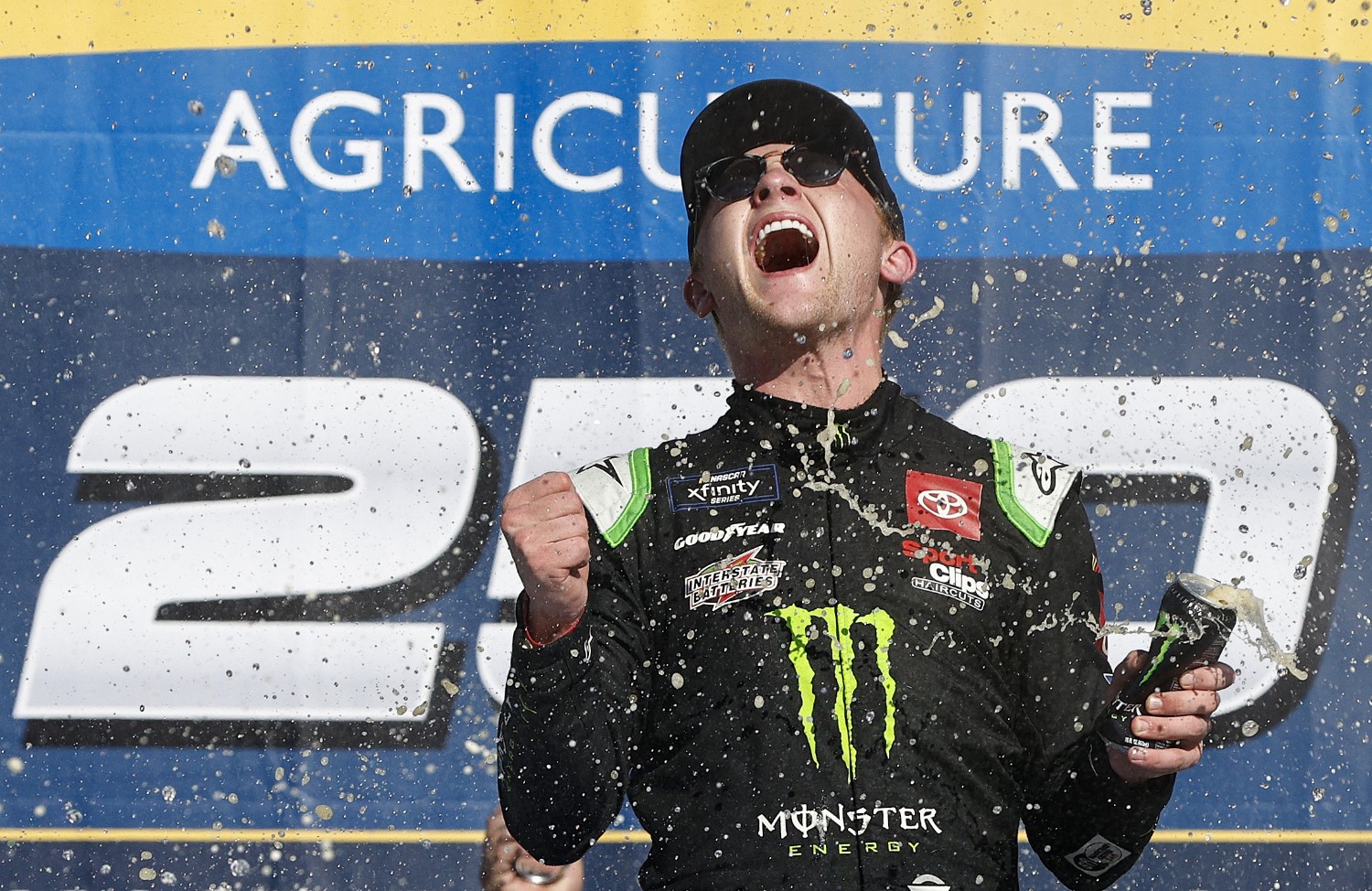 Taking control of the race in the final stage, Ty Gibbs sped to his NASCAR Xfinity Series-best fifth victory of the season in Saturday’s New Holland 250 at Michigan International Speedway.

The tenor of the race changed markedly near the end of the second stage when pole winner Noah Gragson opted to stay on the track and compete for the stage win on the high-speed 2-mile track.

Gibbs had pitted under caution on Lap 55 and inherited the lead when Gragson and others who had stayed out until the completion of the stage came to pit road during the stage break.

The race ran caution-free from the final restart Lap 68 to the finish on Lap 125, and Gibbs beat runner-up Justin Allgaier to the stripe by 1.160 seconds. Gragson worked his way up to third but trailed Gibbs by 2.472 seconds at the finish.

“I think this type of racing shows the strategy in the pit stops,” said Gibbs, who led twice for a race-high 54 laps, matching the number of his No. 54 Joe Gibbs Racing Toyota. “My guys did such a great job. I work out with them during the week, so I see how hard they work. They do a great job—every one of them.

“So I’m very thankful and glad to be part of the organization that motivates me like that week in and week out — not motivates, because that’s temporary — but being relentless, and I feel like that’s what they showed me.”

The victory was Gibbs’ first at Michigan and the ninth in 39 Xfinity Series starts for a remarkable winning percentage of 23.08.

Allgaier opted for the same strategy as Gibbs, but a slow green-flag pit stop on Lap 100 cost him a chance to compete for the win.

“I pitted to try and get clear of some lapped cars, and, unfortunately, we merged back on the race track right behind those same lapped cars, right before they made their pit stops,” Allgaier said. “So not only did we have to contend with getting by them, as soon as we got by them, they all pitted.

“Second place is tough, but my daughter’s birthday’s on Monday, so we’ll celebrate, even though it’s second.”

Gragson’s No. 9 JR Motorsports Chevrolet arguably was the fastest car in the race, but strategy and the absence of cautions in the final stage doomed his prospects.

“Restarted the third stage 12th, and that kind of hurt us there at the end, but overall good day for our Bass Pro Shops, Black Rifle Camaro. We were running him down—just needed more laps there at the end.”

The caution flag waved just twice for on-track incidents Saturday. The first came at Lap 41 when CJ McLaughlin contacted the outside wall and Matt Mills spun behind him, with the other waving at Lap 53 for an incident involving David Starr and Dillon Bassett in Turn 2. The latter crash set up the dash to the finish of Stage 2 and altered pit strategy for the race’s frontrunners.

Gibbs is also competing in the Cup Series race on Sunday (3 p.m. ET, USA Network, NBC Sports App, MRN, SiriusXM NASCAR Radio) in Kurt Busch’s No. 45 Toyota as Busch recovers from concussion-like symptoms. He will start 11th in the Cup race alongside Gragson, who will pilot the No. 16 Kaulig Racing Chevrolet from 12th. Hill will make his Cup debut in the No. 33 Chevrolet for Richard Childress Racing starting 31st.

NOTE: Inspection in the Xfinity Series garage is complete with no issues, confirming the No. 54 as the race winner.

How strong was your race car today?

“We had a very fast Monster Energy GR Supra. I’m so excited. I think this style of racing shows the strategy and the pit stops. It’s pretty spread out. But my guys did a great job and the pit crew worked so hard. I workout with them during the week and I see how hard they work, every one of them. They do a great job and my cousin is pitting now too so it’s cool to see my family involved. All glory to God and thank you to my team, Monster Energy, TRD, Sport Clips, Interstate Batteries. My car was faster than Xfinity high speed internet, just kidding it wasn’t that fast.”

Why kind of momentum does this give you for the Playoffs and does this performance make you a favorite?

Do your laps in the Cup car help you for this race?

“I’m very thankful for the opportunity and I hope Kurt (Busch) gets better. But at the end of the day it doesn’t really help me. It’s so different and the way the car is different. You think these drive different, just wait until you get to the Cup Series.”

How important was clean air in this race?

“Clean air is great air. We definitely had a very fast Monster Energy GR Supra. First of all, have to say all glory to Jesus. Thank you for this opportunity. It’s super cool to win here at Michigan, second time to win here and it’s super cool to win here. My guys did such a great job and I know how hard they work, I workout with them during the week. They work so hard. I’m very thankful to be part of an organization that motivates me like that week in and week out. Maybe not motivates because that’s temporary, but relentless and I feel like that’s what they showed me.”

What was your progression like throughout the afternoon to stay up front?

“My guys did such a great job on strategy and thank you for that. Thank you to TRD, we feel like we have a simulator that’s really close so it’s helping us out on these tracks. They work really hard over there so thank you to everyone that gets the simulator ready. Thank you to all my crew and maybe we can go win a Cup race tomorrow.”