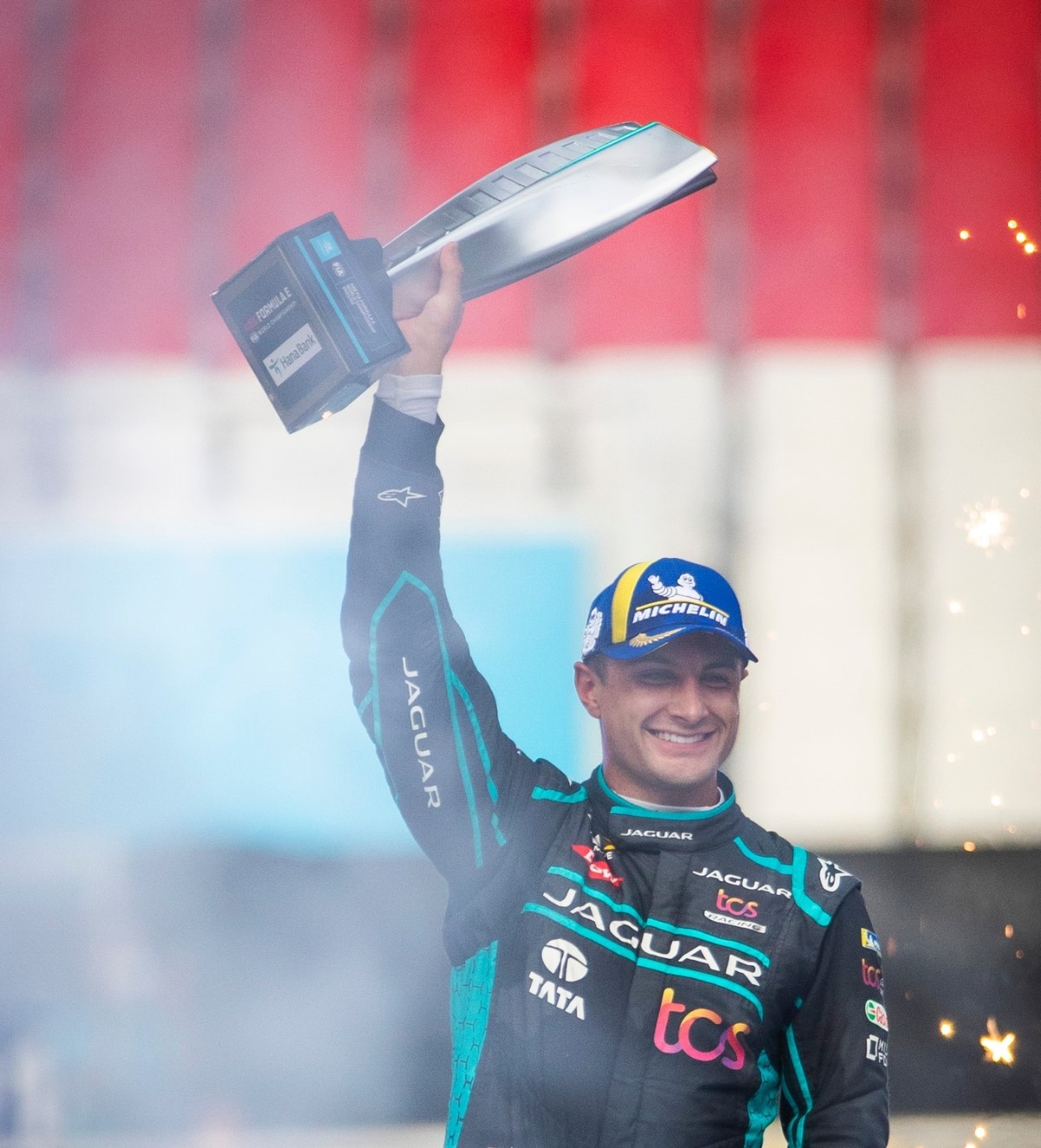 Mitch Evans produced under pressure to keep his title chances alive and slice into Stoffel Vandoorne’s points advantage as the Kiwi jumped from third on the grid to the race win in the Hana Bank Seoul E-Prix Round 15.

The Jaguar TCS Racing driver dispatched Julius Baer Polesitter Oliver Rowland (Mahindra Racing) off the line as the Brit struggled to get away cleanly over greasy road markings – the circuit still soaked from an earlier downpour. Evans then rounded Lucas di Grassi with a stealthy move into Turn 3, again on the opening lap.

Great to see all seven drivers walk away unscathed from this incident at the start of the race.

From there, after the restart, it was relatively serene for Evans, who managed a comfortable three-second gap for much of the race to Rowland; the Brit happy to seal his first podium of the season and his first with Mahindra. Di Grassi’s 39th podium brought about his 1,000th point in Formula E – the first driver to do so – in his 99th race.

The season finale and Formula E’s 100th race follows on Sunday, where the destination of the Drivers’ and Teams’ World Championship trophies will be decided.

With the circuit still holding plenty of standing water, but with no further rain falling or scheduled to fall, Evans fired away from third to slice by Rowland right from the off. He had a look around the outside of leader di Grassi and made it by the Venturi at Turn 3 – the Kiwi on a mission.

Di Grassi lost out to Rowland in the stadium and was immediately under pressure from Dennis who made a move stick for third.

On the penultimate corner, a collection of eight cars fell foul of some of that standing water with each finding the wall and one-another – Buemi, Askew, Lotterer, Ticktum, Turvey, Cassidy, Nato and de Vries all involved, with the Dutchman’s Silver Arrow 02 spearing beneath Buemi’s Nissan. A Red Flag was the only realistic outcome from that and we’d go again some 45 minutes later.

On Lap 5, Mortara was the recipient of contact from Vergne into the final corner, causing the Venturi to half spin – though the Swiss looked to have moved in the braking zone, possibly trying to avoid puddles or bumps, in fairness. That saw Vergne take fifth and Vandoorne follow through to take sixth. Mortara, then seventh, was slapped with a five-second time penalty.

Dennis and di Grassi were first to jump for ATTACK MODE on Lap 4 and 5, respectively, with the circuit looking half a second quicker per lap as the standing water shifted and burned off. Even so, that extra 30kW was causing a little extra wheelspin – some drivers had made the call to wait until the track dried further for maximum benefit, with Vergne and Mortara the last of the top 10 to blink.

On Lap 8, it was Evans from Rowland, di Grassi, Dennis, Vergne, Vandoorne, Mortara, Wehrlein, da Costa and Frijns the top 10 with the field strung out – cars a second or so apart.

Vandoorne made more ground with a regulation pass on Vergne for fifth spot – another couple of points in his pocket, and further damage to his standings lead limited with Evans still leading.

On Lap 20, Mortara’s championship hopes came to an end via a right-rear puncture, and retirement was the result. Doubly costly for Venturi in their Teams’ title battle with Mercedes-EQ. The Monegasque team had a good chance to profit from de Vries’ earlier retirement.

Evans looked serene out front with the hard work now done. Three seconds was his margin over second-placed Rowland inside the last five minutes plus one lap. A brief blip with a lock-up into Turn 22 was just about the only wobble the New Zealander had all race.

Alexander Sims (Mahindra Racing) had clambered up to 10th position but once again found the wall after hitting the barriers in qualifying – the Brit losing the back end of the car in the stadium.

A Full Course Yellow then a spell under the Safety Car was required for the Mahindra’s recovery, and that saw the race come to a close – Evans the winner, cutting Vandoorne’s standings lead to 21 points – still doable heading into the final round on Sunday.

Rowland in the sister Mahindra had a far better time of it, bringing things home in an unbothered second position, with di Grassi making the final step of the podium. Dennis followed in fifth while Vandoorne came home fifth – limiting Evans’ progress in the points battle handily.

MITCH EVANS, JAGUAR TCS RACING, #9 said: “That was the plan [to keep the Championship race alive]. It has been a lot of work since London to make sure we can make this result possible. This morning was tricky, we didn’t quite have the pace, but then the rain came at the right time – I qualified at the front – and had a good start. The race was really hard to manage, the conditions change all the time, so thanks to the team for guiding me through. This is what we needed, we don’t give up, so we go to tomorrow and keep fighting. Can I do the double? That’s the plan, I’ve done it before – let’s do it again.”

OLIVER ROWLAND, MAHINDRA RACING, #30 said: “I can’t really ask for much more, it has been a difficult season. Obviously getting the Pole Position and the 18 points is fantastic for the team. We knew this year was going to be difficult, my first with the team, but we are pushing really hard for next year and I am glad to give the whole team and these fans a great result.”

LUCAS DI GRASSI, ROKiT VENTURI RACING, #11 said: “It is a really big honour to race here, amazing place, amazing fans – thanks everybody. We did our best today for the team on the constructor’s championship, and for me personally to reach my 39th podium and 1,010 points, so I am super happy and we are going to celebrate a lot! It couldn’t be better, this track and the people of Seoul have been amazing, we couldn’t have had a better day. We fought very hard, we extracted the most out of it – no mistakes – and thank you to the team for the car that they gave me, and thank you to the fans for being here.”