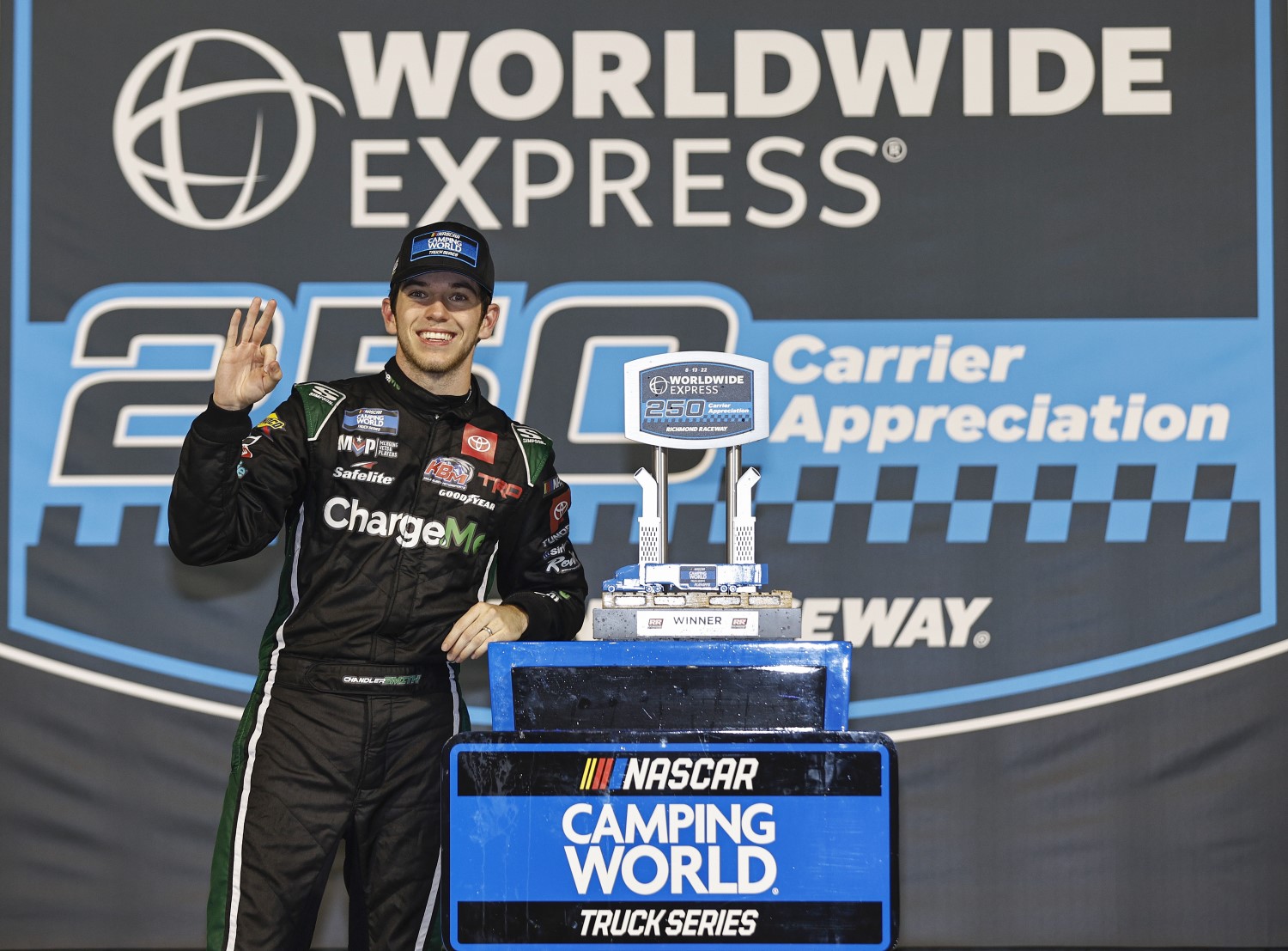 The first truck off pit road controlled the race.

That was the story of Chandler Smith’s dominating victory in Saturday night’s Worldwide Express 250 at Richmond Raceway.

Smith took charge of the second event in the NASCAR Camping World Truck Series Playoffs when he won the race off pit road under caution on lap 75 — during the break between the first and second stages.

That was the ballgame. Smith led the final 175 laps through two cautions, one for the second stage break and one for an accident in Turn 1 involving Nick Leitz and playoff driver Carson Hocevar.

With his third victory of the year and fifth of his career, Smith earned automatic advancement to the second round of the playoffs, joining Grant Enfinger, who won the playoff opener at Lucas Oil Indianapolis Raceway Park.

“Hell of a job!” Smith exulted after crossing the finish line 2.790 seconds ahead of runner-up and Kyle Busch Motorsports teammate John Hunter Nemechek. “This truck was really good — I’m not going to lie.”

It also helped that the track came to Smith after a first stage dominated by pole winner Ty Majeski, who led 73 straight laps after Smith led the first one.

Majeski won the first stage by more than four seconds, but his jackman, Paul Steele, fell in front of the No. 66 Toyota as he sprinted toward the right side of the truck. Majeski was hard on the brakes to avoid injury to Steele, but the miscue cost him two positions he never regained.

“I saw him trip, and I slammed on the brakes so I didn’t hit him,” said Majeski, who finished third. “He did a great job — he’s actually first-time tonight — he recovered well, really salvaged that pit stop. He rebounded and had a couple great stops. That’s what teamwork is all about.”

Smith’s crew was exceptional. On all three pit stops, the No. 18 team got him off pit road first, negating Nemechek’s advantage of the number one pit stall.

“I feel like the track just came to us there at the very end, especially Stage 2,” Smith said. “My pit crew did a bad-ass job — excuse my language — but they deserve that recognition. They did an amazing job, got me the lead, and we never gave it up.”

Nemechek thought the final caution for the incident in Turn 1 cost him a chance to contend for the victory. During the long green-flag run before the yellow, he had cut into Smith’s lead, and at one point pulled alongside his teammate before the frontrunners cleared traffic.

“I felt I had saved my stuff a little better on that run,” Nemechek said. “I was running him down pretty quick.”

The lead-lap trucks pitted for tires under the caution, however, and Smith pulled away once again after the final restart on Lap 223 of 250.

Enfinger finished fourth in a No. 23 Chevrolet that didn’t have the speed to contend for the win. Non-playoff drivers Corey Heim and Taylor Gray followed in fifth and sixth, respectively.

Three-time series champion Matt Crafton came home seventh and moved above the playoff cut line, three points ahead of Hocevar, who dropped to ninth in the standings, despite salvaging a 10th-place finish.

The bottom two drivers in the standings will be eliminated from the playoffs after the next race on Sept. 9 at Kansas Speedway.

NOTE: Post-race inspection was completed without major issue, confirming Smith as the winner. His No. 18 Toyota had one unsecured lug nut.

After becoming a first-time Dad earlier this week, how special is this race win?

“God is so good. I’m a Daddy now. My wife had such an amazing labor and delivery. We have an amazing and beautiful baby boy at home. Honey, this is for you and Jr. this is for you as well. I can’t wait to get home to you two tonight. The blessings just keep stacking up. I have an incredible group behind me at KBM (Kyle Busch Motorsports) and an incredible group of partners with ChargeMe, Safelite and everybody. I’m taking this in. I don’t know what I’ve done to deserve it, but I’m going to keep taking it in and giving all glory to the Lord.”

Does this race win serve notice that the championship will go through this team?

“I’ll leave that to you guys. Just like I said at media day, if the Good Lord wants it to be our championship, then it will and if it’s not, it’s not. I like how everything is going right now for sure.”

What did you need to make a run at Chandler Smith for the win tonight?

“We didn’t adjust quite like we needed to from day to night. Partly on me so I’ll take that one. Overall, solid day for our Safeway Toyota Tundra TRD Pro. Thank you to all of our great partners that are on this Tundra TRD and everyone that helps out and keeps us going here. Just big picture racing I would say. Really good points day. Second, second and second for all three stages. Can’t complain about that, just one spot short. It’s good to be disappointed when you have a run like that with second, second and second. Really good points day, let’s go advance to the next round. Only thing that matters is getting to the final four in Phoenix to compete for a championship.”

What are you going to do in the two weeks before the Kansas race?

“Going to run two races for Sam Hunt Racing in the Toyota GR Supra. Excited to go stay in the seat and keep everything that I can sharp and go have some fun racing.”

How was your truck overall tonight?

“I thought we had a really good truck in qualifying and practice, but it didn’t quite correlate to the race. Just have to get better at being a little bit more picky with the balance and learning the transition with these race trucks from day to night. All in all, really good run for us today. We had a good points day and we’re right there.”

How difficult was it to recover after the incident with your jackman?

“I saw him trip and I slammed on the brakes so I didn’t hit him. He did a great job and it was actually his first time tonight and he recovered well and really salvaged that pit stop. He rebounded and had some really great stops. That’s what teamwork is all about, we win and lose as a team. I tried to encourage him over the radio and told him it was a good recovery. They gave me two great pit stops on those last two.”