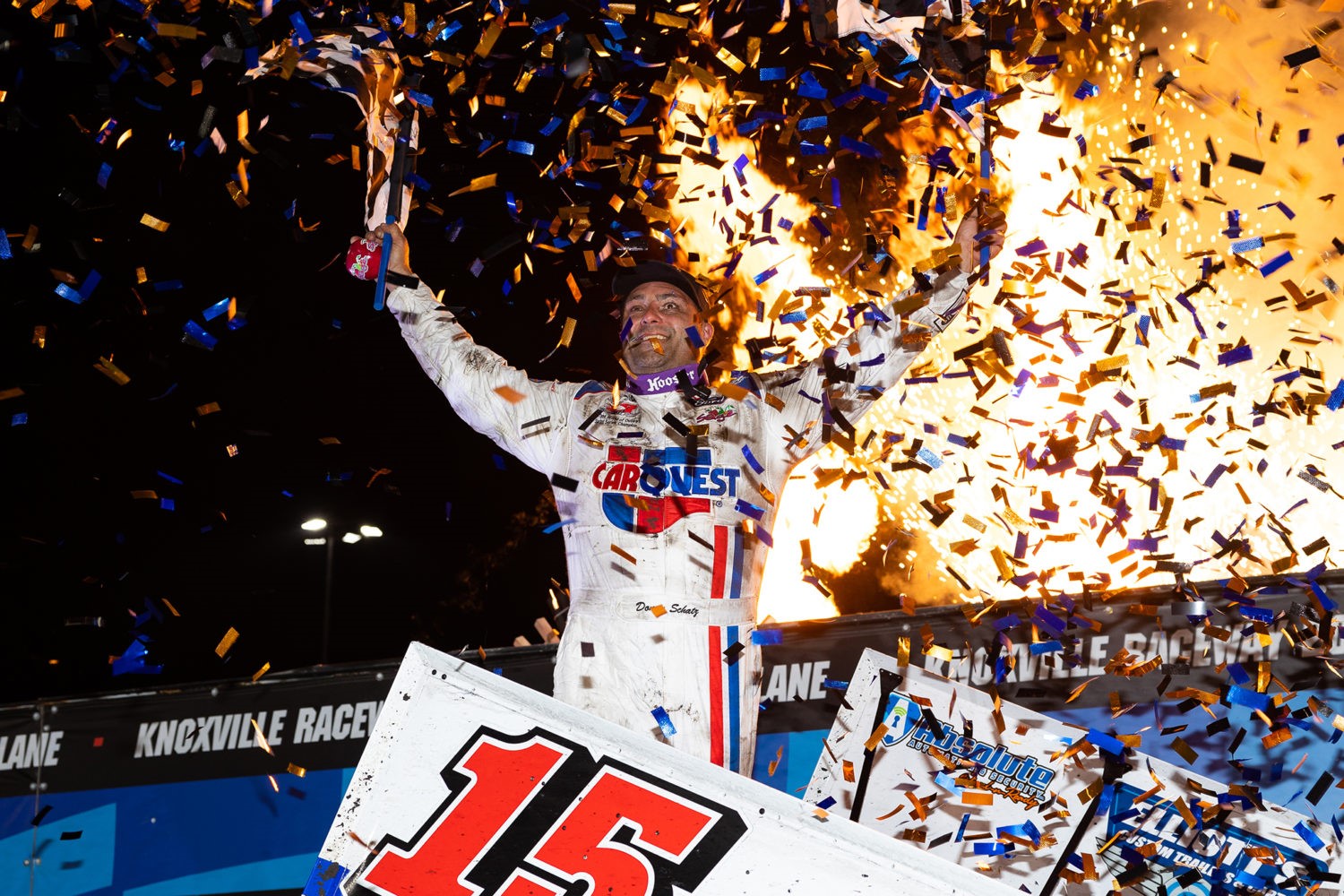 Donny Schatz made a late charge to record his eleventh NOS Energy Drink Knoxville Nationals Presented by Casey’s championship Saturday night at the Knoxville Raceway. The Fargo, North Dakota native recently lost his father Danny, so the $175,000 triumph was an emotional one to say the least. The winning ride came aboard the Tony Stewart Racing #15. It marks the twelfth owner championship for Stewart, who is second on the all-time list behind Karl Kinser’s 14 triumphs. Donny’s eleventh title also ranks second, just behind Steve Kinser’s twelve.

The 50-lap championship event got off to a rocky start. JJ Hickle flipped wildly in turn one after the green flag fell, and collected Parker Price-Miller, who was transported by ambulance for observation.

Once things went green, pole-sitter Austin McCarl led lap one, but Tyler Courtney showed his strength on lap two, taking the lead and driving away. David Gravel worked by Donny Schatz into the third spot early on, and Carson Macedo would move into the top four on lap three.

Kyle Larson entered the top five on lap six, before Courtney entered lapped traffic on the eleventh circuit. Larson was running fifth when he blew his right rear tire on lap 12. Courtney led McCarl, Gravel, Macedo and Brad Sweet. Scelzi got into the wall on the restart, slowing things yet again.

Shredded right rear for Kyle Larson. Crews change tire an he is pushed back off. #NOSvilleNationals pic.twitter.com/Yjue7XfwNu

Gravel captured second on the restart, but things slowed again four laps later when Justin Sanders came to a rest on the front stretch. It was Brent Marks turn to roll when green fell again, as he jumped from seventh to fifth, took fourth from Macedo on lap 19, and has a pass for third negated when the mandatory pit stop came at the halfway mark.

Courtney had built a 2.1 second lead before the break, but the restart put Gravel on his tail. Gravel made a bid for the lead immediately, but Courtney fought back. A slider in turn three on lap 27 gave him the point. Schatz gained fifth, took fourth from Macedo with 20 to go, and two laps later, passed McCarl for third on the low side. McCarl would suffer a flat of his own shortly after, surrendering his fourth place run.

Gravel led Courtney, Schatz, Macedo and a charging Logan Schuchart back to green flag racing. Schatz worked under Courtney to gain second before Macedo suffered a flat right rear on lap 39. Gravel took off again, but Schatz closed late, while Shark Racing teammates, Schuchart and Jacob Allen battled each other for the fourth spot.

Schatz gained momentum low and caught Gravel with four to go. He slid across turn three to take the point and never looked back. Gravel held on for an $80,000 score in third, while Schuchart took third and $40,000 with two to go. Courtney was fourth and Allen was fifth. Larson, Marks, hard-charger Sheldon Haudenschild, Sweet and Daryn Pittman rounded out the top ten. Schuchart won the B main, Kyle Reinhardt took the C, Blake Hahn claimed the D, and Dylan Westbrook won the E main.

Aaron Reutzel won the Beaver Drill & Tool Jesse Hockett “Mr. Sprintcar” title and the $6,500 that went with it. Buddy Kofoid was the $1,000 Jetco Rookie of the Year.

“I didn’t drive like I should have at the beginning,” said Schatz in Victory Lane. “We’ve been working so hard on getting the tires caught up. I could hear him (his father) telling me to ‘gather it up and settle down.’ It worked. Hat’s off to my guys and all our partners. I didn’t know if we were going to get there. We fell back to seventh early. I just couldn’t control the wheel spin. It was do or die on the bottom. As the race went on, I kept getting better and better there. It’s pretty surreal. It feels like the first one, really. I had a couple good runs (at Gravel), and I knew if he saw me, he might change his race. I was really getting off the bottom of turn four pretty decent.”

“We had a great car,” said Gravel. “I was a little aggressive early, but I wanted to put a couple guys behind us. Sometimes, it’s better running second. I felt so good on the top and didn’t want to get off it, and didn’t have to all race. The last couple laps I was spinning a little bit down the straightaways. I heard Donny going into three and I figured he was coming. In hindsight, I should have tried running low in one and two, but when you’re leading and feeling pretty good, you don’t want to change it up.”

“How can’t you be thrilled at what this team accomplished this week?” asked Schuchart after his run from 17th to third. “Not just this team, but the #1a too. I’m very proud of Shark Racing as a whole. We just made some small changes (at the break). I felt I could do what I needed to do with the wing. I didn’t want to make too many changes, because I was scared of going a little bit too far. The last five or ten laps, I felt like I had nothing to lose and I just went for it. I could just run the bottom wide open. In hindsight, you wish you could do things better or differently, but to start 17th and get up to third was great.”

Join us Saturday, August 27 for Knoxville Hospital & Clinics Season Championship Night! All three sprint classes will be in action. With point races tight, it should be action packed! Two 410 features will be on the card! For more information, visit or check Knoxville Raceway’s website at www.KnoxvilleRaceway.com or on Facebook and Twitter.