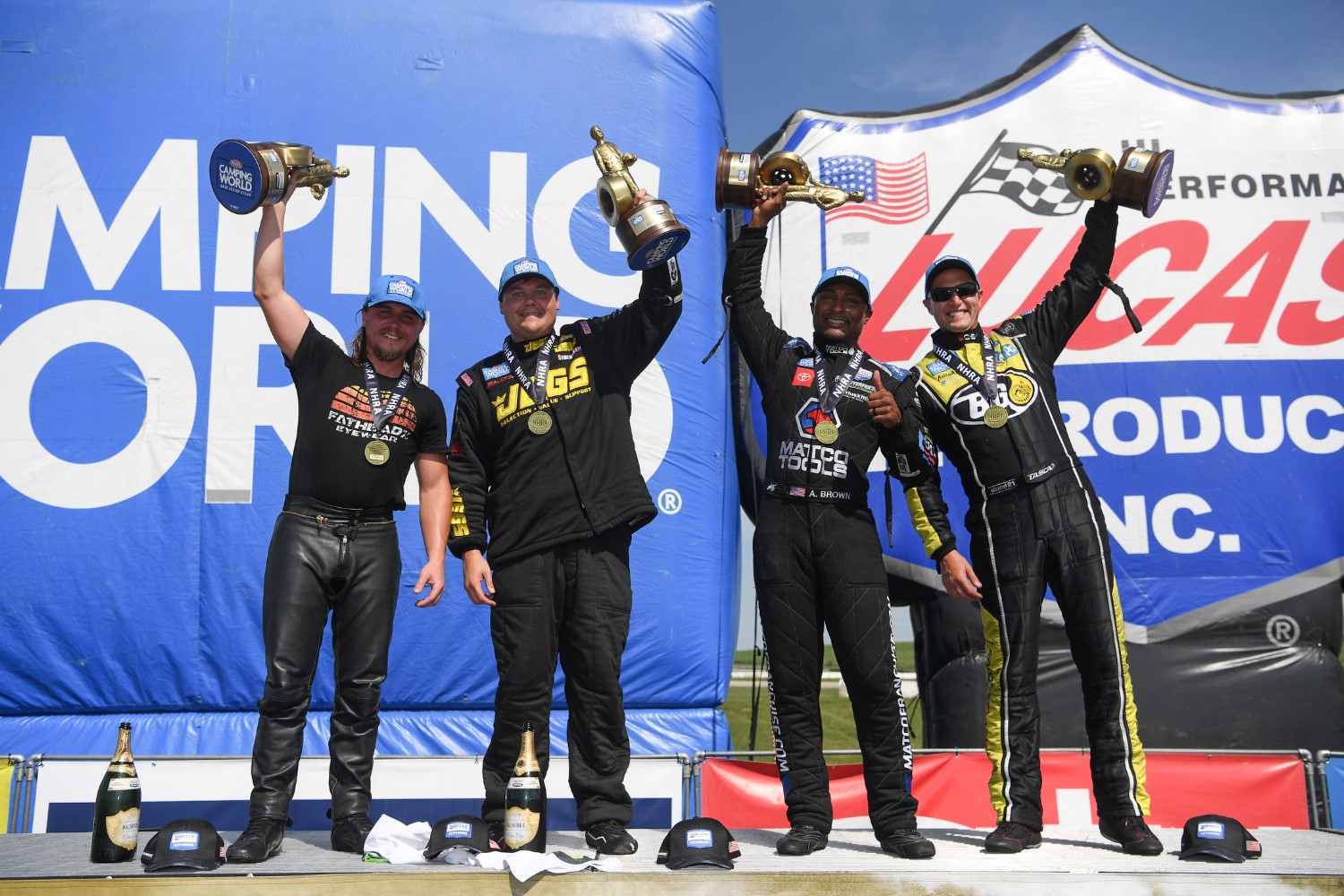 Number 11 qualifier Antron Brown advanced over Brittany Force in round one when both cars lost a cylinder, but Brown was able to hold on longer.

Steve Torrence sets low-e.t. of race day so far and will take lane choice going into round two.

See one of the strangest wins in Funny Car all season as John Force lined up against Cruz Pedregon in round one.

The race track temperature rose 12 degrees since the start of the day and is now at 123 degrees.

Bo Butner was in an all-new car that was originally built for Erica Enders, but her car is working so well for her there is no need to change. Butner defeated Matt Hartford. 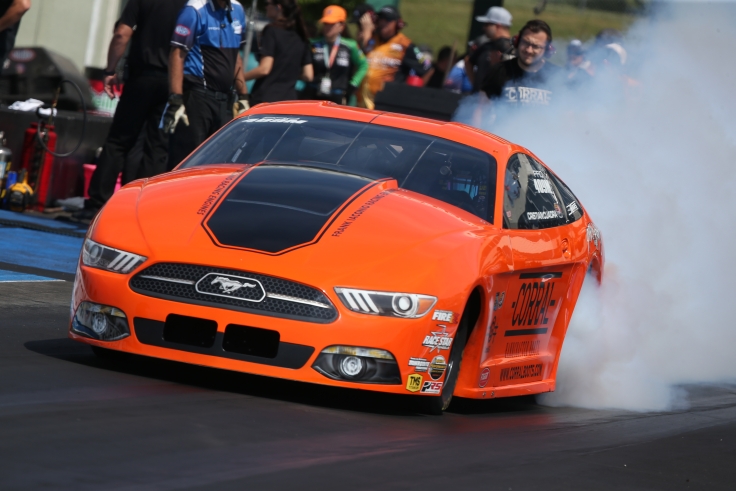 The Cuadra brothers, Fernando Cuadra Jr and Cristian Cuadra lined up against each other, and the older brother Fernando Jr sent the younger brother back to the trailer.

Greg Anderson made a competition solo and went into wheel hop right at the top of first gear. Was he testing something?

The unstoppable Erica Enders lined up against Fernando Cuadra and Cuadra went red with a -0.083

Chris Bostick was supposed to be lined up next to Angie Smith but his bike had engine issues, and he was not able to make the call. He announced in the booth with Alan Reinhart . 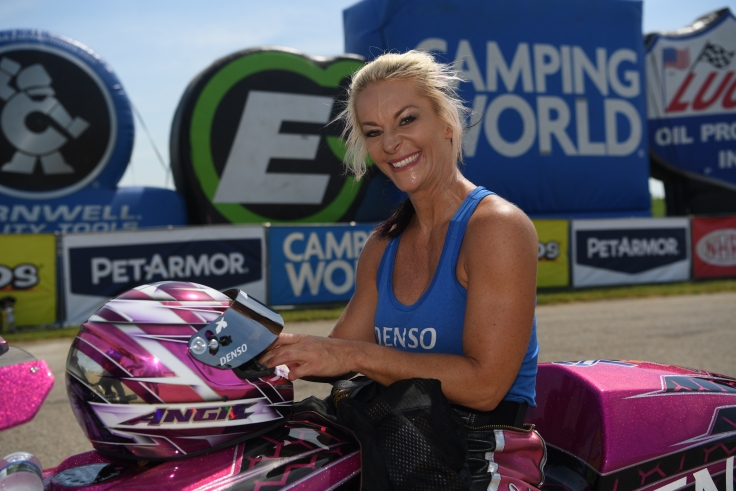 Matt Smith switched to his V-twin bike on race day because the transmission broke in his Suzuki. He defeated Steve Johnson with a better reaction time and a better run.

Joey Gladstone made a solid clean run, and Bostick said that Gladstone was one of the best riders he’s ever seen.

Justin Ashley took down Leah Pruett in round one after Pruett’s dragster seemed to have a throttle issue. 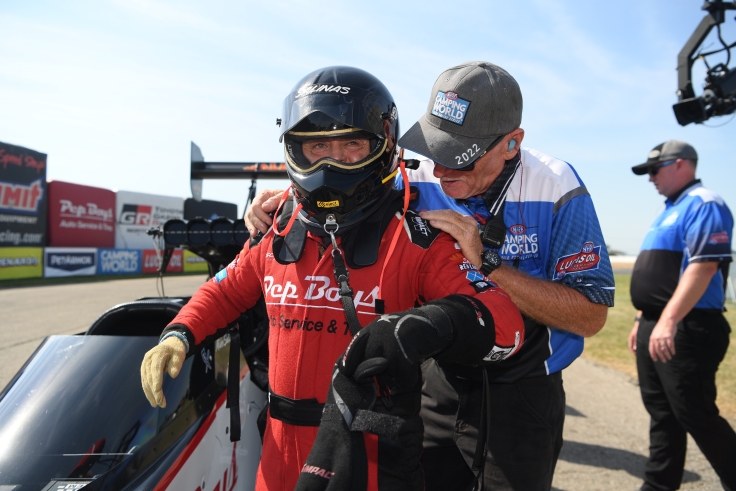 Tony Schumacher was defeated by Steve Torrence when a cylinder went out in the Schumacher car and Torrence’s car was running like a freight train to the finish line.

J.R. Todd was disqualified after a post-race technical inspection infraction. Alexis DeJoria paired off against Robert Hight and was defeated by a 3.987    320.05 to her 4.580 at 184.45 run. Perhaps the team DeJoria team didn’t have enough time to turn the car properly? 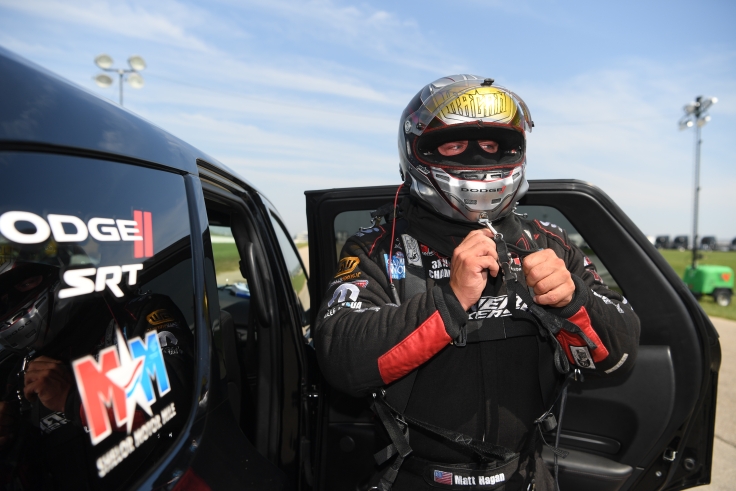 John Force and Ron Capps paired, and Force advanced in a close race that saw  great power, but weak reaction times (0.107 for Force and 0.093 for Capps).

Dallas Glenn, the reigning rookie of the year, and  Erica Enders, the current points leader, went up against each other, and Enders won by .0013 of a second.

There’s no question that Joey Gladstone had the best motorcycle this weekend. He made the five best runs in the class this weekend. 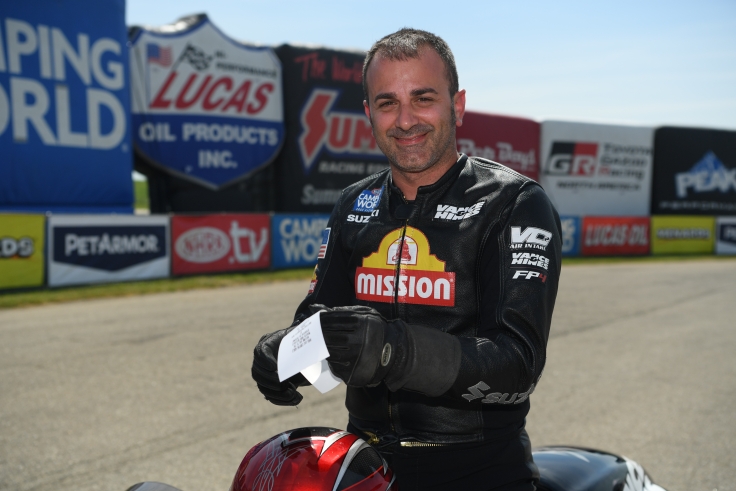 Angelle Sampey will not repeat her 1997 win after being beat by Jerry Savoie when her bike wouldn’t shift.

Antron Brown and Justin Ashley matched up, Ashley had issues in the first hundred feet, and Brown’s engine lost power at half-track. Ashley attempted to run down Brown, but there wasn’t enough room. Brown goes to his first final as a team owner and the first since 2021 Pomona Final.

Steve Torrence and Mike Salinas had identical reaction times but by the 60-foot mark, Torrence was pulling ahead and by the 660-foot mark Salinas was out of the groove and Torrence got the win.

John Force beat Robert Hight to go to the final round against Bob Tasca III who defeated Matt Hagan.

Greg Anderson and Kyle Koretsky  and Anderson got away first and never gave up a single metric to Koretsky and won with a 0.0433 second margin of victory,

Teammates Erica Enders and Troy Coughlin Jr. came to the line, and Enders had the reaction time advantage, but Coughlin was gaining on her by the 60-foot mark and passed Enders at the top end to win by 0.0055 second.

Jerry Savoie’s and Eddie Krawiec’s semi-final battle came down to putting the power built by Tim Kulungian and Andrew Hines. The Vance& Hines power proved more that Savoie could hold off.

With the best bike on the property and a team that is building momentum, Joey Gladstone cut a better light than Angie Smith (.020 to .025) and never gave up the lead, winning with a margin of victory of 0.2137.